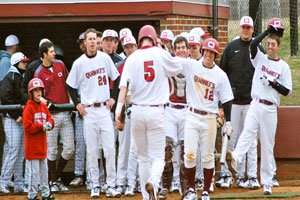 One of Guilford College’s oldest athletic traditions, the baseball season, got underway last Wednesday against Greensboro College, the first match in a 40-game season that spans from February to April.

A cold, cloudy afternoon did not appear to dampen the spirits of the white-capped, maroon jacket–wearing Guilford team, with players lining the dugout railing looking on and cheering teammates out on the field.

“I have very, very high hopes for this team,” said Head Baseball Coach Nick Black of the upcoming season. “We’re deeper than we’ve been for a long time in many spots. We have more quality players on the mound than we’ve had in the past.”

The Quakers enter this season with five returning starters and 22 letter winners from last season. One of 10 schools in the Old Dominion Athletic Conference, the team was picked seventh in the annual preseason coaches’ poll.

Overall, the team sports a more balanced, youthful roster with only five seniors on the team. The pitching staff in particular features ten newcomers.

“The biggest need going into this year from last year recruiting-wise was for pitching,” said Black. “I think we’re talented, but we will be young this year.”

This season, the Quakers will be without 2011 ODAC Player of the Year Kyle Wooden ’11. The Guilford graduate and school career-hitting-leader will be playing professionally in Sweden starting in April. In the meantime, he will be assisting the Guilford team by helping train outfielders and infielders, according to Black.

The Guilford students currently on the team hold a positive outlook for the upcoming season and hope to grow individually and as a team.

“For me personally, it’s about just getting better every day and trying to help the team win,” said first-year Dexter Allen through an email interview.

Having played on a state championship team last year while in high school, he expects Guilford to compete in conference play this year.

“I’m really excited to be finally playing new teams and seeing new pitchers,” said Allen about the start of the season.

It is a sentiment echoed by fellow first-year student and Guilford baseball player Ethan Harter. “I expect the team to finish in the top half of the conference this year. From what I hear, we will be a team with much more consistency than in the past,” said Harter.

The team has been working since almost the beginning of the school year to get ready for this time of the year.

“We started doing early morning conditioning about the third week into the fall semester … as far as official practice, we began about a week after returning to school from Christmas break,” said junior Justin Pittman in an e-mail interview.

A transfer student from the University of North Carolina at Charlotte, Pittman is excited just getting back to playing baseball after not doing so at his previous school.

“After being away from the sport of baseball for almost three years, it is a dream come true to be able to play again,” said Pittman.

With the Quakers playing home games at Guilford’s McBane Field, Black sees plenty of good baseball on hand for the college community.

“Man, they’re all going to be good,” said Black of the team’s scheduled games this season. “That’s the great thing about baseball in this area—there really aren’t any bad teams. Every team you have to play hard to win, so they’ll all be exciting.”

Despite dropping the season opener to Greensboro College 6-3, the Quakers bounced back with a 16-9 home win against Bluefield State College Feb. 11. The Quakers will have many chances to prove themselves on the baseball field.

“I look forward to getting into the season and working as hard as we can to bringing pride to Guilford College,” said Pittman.