Swim team strokes its way to a brighter, faster future 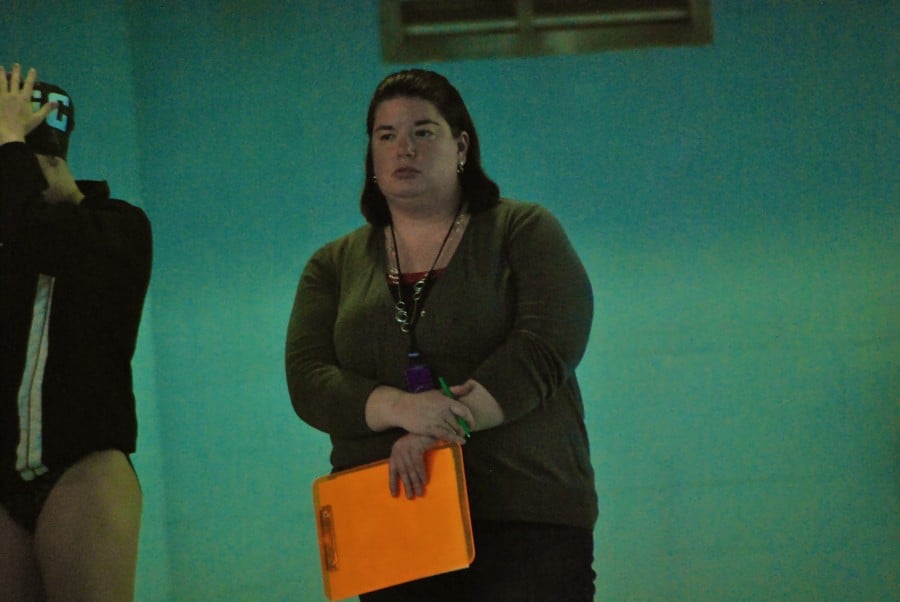 “I am more dedicated than I have ever been,” said Becca Dozier, a third year about the upcoming swim season.

The Quaker ladies swim team has been experiencing some big changes, brought about by their newly appointed head coach Emily Wilson.

Wilson has been with the Guilford Quakers for the past five seasons as the assistant coach of the swim team.

This, however, is not her first time being the head coach of a swim team. She is applying her fourteen years of coaching experience now more than ever.

“The changes started from day one,” said Wilson. “The workouts are focused on quality instead of quantity. We use the clock and do a lot of interval work.”

“I have been working heavily on technique with many of the swimmers as well,” said Wilson in regards to the new practice regimen.

Swimmers are now being pushed to do things outside of their comfort zones. Wilson has asked everyone to step up and work harder to improve the overall team.

The changes are not only applicable to the practices.

She describes Wilson as a dedicated, motivated and very organized coach.

One of Wilson’s hopes for the upcoming season consists of moving up in the ODAC standings. In order to do that, she says, the team needs to compete in all the match events. These would include the breast stroke, freestyle, backstroke and butterfly.

“Every single point counts and is recognized whether you are first, second, third or last,” said Wilson. “It would be great to develop a team to have more depth and be able to fill every lane at meets.”

One of Wilson’s biggest challenges as head coach so far has been the small size of her team.

Just as Wilson does, Dozier also hopes that the team will gain more people and that more Guilford students will come out and support them in the meets.

Individual performance of the swimmers is also a priority for Wilson. The team has already been able to celebrate some career best swims as well as some personal bests.

Rebecca Bacon swam the 100M butterfly the fastest this season with a time of 1:25.77. Her teammate, senior Kelcey Johnson, reached the season highs in the 50M freestyle with her time of 30.63 seconds.

“I want the swimmers to really be proud of what they are doing, push through difficult swims and focus on technique when they are tired,” said Wilson.

Outside of the pool, Wilson wants the team to be more active in the community. She describes it as being key to personal growth as an adult.

“I would like to volunteer as a team at the Guilford County Animal Shelter,  volunteer to work at national competitions at the Greensboro Aquatic Center, work in the public schools reading with students or volunteering to work at the Women’s Only 5k in October (water stations, food stations, etc),” said Wilson in an email interview.

Coaching is only one of the things that occupy Wilson’s time. She is entering her seventh year as a full-time teacher in the Guilford County School District.

“As a coach the end game is ODAC’s championships, so I need to form a plan of workouts that give the swimmers the best chance of improvement, as well as the team the most possible points at the meet,” said Wilson.

“In teaching I need to differentiate for my students. which is similar to coaching as you differentiate your workouts for swimmers as well.  As a teacher, I also have to be able to breakdown concepts and give a lot of explicit instruction.

Time commitments are a challenge for Wilson and her swimmers as well.

Being a Guilford student and participating in college sports means being able to manage time wisely. Between, class, practice, homework and meets, it is often times difficult to fit in the necessities’ like food and sleep.

Dozier describes being on the team as having to organize her time well, which is made easier with having night time practices.

Since college students are night owls, they are more motivated at night to put in the time and work. In the previous seasons, practice was held in the mornings.

“The practices are hard, but in a good way,” said Dozier. “I always feel better after practice. I am more dedicated than I have ever been about the upcoming swim season.”

The Guilford swim team is working hard to improve and make Quaker-Nation proud, so come out and watch the fruits of their labors at this season’s meets.