The 63rd annual Grammy Awards: Too little, too late 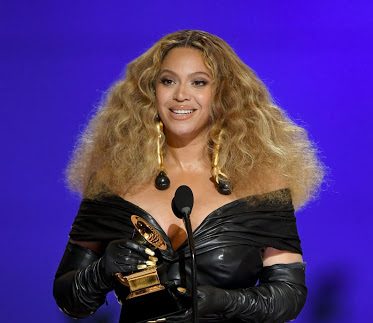 On March 14, Beyoncé gazed radiantly down at the (COVID-safe) crowd in the Los Angeles Convention Center, wearing a black leather dress and matching gloves, to accept the Grammy award for Best RnB Performance, won by her song “Black Parade.”

“As an artist I believe it’s my job… to reflect the times, and it’s been such a difficult time,” she said in her acceptance speech. “So I wanted to uplift, encourage, and celebrate all the beautiful Black queens and kings who continue to inspire me and inspire the whole world.”

Beyoncé ended the night with four Grammys, bringing her collection to 28 total. She is now the most Grammy-awarded artist in history.

Women won big at the 2021 Grammys, with Billie Eilish, Megan Thee Stallion, Taylor Swift, Dua Lipa and H.E.R. sweeping the most prestigious awards. Yet the gesture is performative given the Grammys’ history of snubbing Black and female artists, and begs the question of if we should continue to consider the Grammys as the ultimate authority of American music.

Given COVID restrictions, a limited number of individuals were allowed into the event, making the Grammys oddly intimate. Trevor Noah hosted the evening, delivering deliciously funny commentary on the state of awards shows in the time of COVID. The night commenced with Harry Styles’s roguish performance of “Watermelon Sugar,” complete with a leather suit and a green feather boa reminiscent of Elton John. Other performances included Megan Thee Stallion’s powerhouse renditions of “Body” and “Savage,” Haim’s indie rock hit “The Stairs” and BTS’ explosive song “Dynamite,” pre-recorded in Korea.

The award winners were equally impressive. Taylor Swift won Album of the Year for “Folklore,” while Billie Eilish won Record of the Year for “Everything I Wanted.” Megan Thee Stallion won Best New Artist and both Best Rap Performance and Best Rap Song for “Savage” (along with Beyoncé, who was featured on the track). Dua Lipa won Best Pop Vocal Album for “Future Nostalgia,” Beyoncé won Best R&B Performance for “Black Parade,” and Best Music Video for “Brown Skin Girl” (meaning that her daughter, who was featured in the video and track, is now the youngest Grammy winner ever!), and of course, H.E.R. won Song of the Year for “I Can’t Breathe.”

As the title suggests, the track was written in the wake of George Floyd’s murder and painfully mourns the the many Black lives lost by police brutality. In her speech, H.E.R. urged viewers to keep fighting for the Black Lives Matter Movement.

“…We are the change we wish to see… That fight we had in us the summer of 2020, keep that same energy,” said the artist.

While a Black woman’s win, especially given the topic of her song, is wonderful and appropriate, the accolade is hollow coming from a historically racist institution.

One of the biggest complaints about this year’s Grammys was the heavy use of BTS in Grammy promotional material, and their loss of the Best Pop Group/Duo Performance to Lady Gaga and Ariana Grande’s “Rain on Me.” BTS is the first K-Pop group to ever earn a Grammy nomination, and their performance of the nominated song “Dynamite” was described as “colorful and electric… complete with tight choreography and high energy,” by CNN.

“Dynamite” has been a smash hit since its release, garnering two seperate Guinness World Records, and seemed to be a shoe-in for the award. While Gaga and Grande’s tune was certainly enjoyable, it was nowhere near as far-reaching as “Dynamite.” Using the wildly popular BTS for teaser material but refusing to follow through with an award demonstrates racial bias.

“The feminists are going nuts,” said Burr. “Why is the cis-white male doing all this Latino stuff?”

The Grammys’ history of racism accusations is extensive and alarming. Since the Grammys were first held in 1957, only ten Black musicians have won Album of the Year, and the award has not gone to a Black musician since 2008 (that album being a collection of Joni Mitchell covers by Herbie Hancock). Many groundbreaking albums by Black artists, which were considered obvious choices for awards, were not even nominated (among these are Prince’s “1999” and Michael Jackson’s “Off the Wall”).

Kendrick Lamar’s momentous album “Good Kid, M.A.A.D City,” was nominated in 2014 for both Album of the Year and Best Hip Hop Album, but was beat out by Daft Punk and Macklemore, respectively. His album “To Pimp a Butterfly” was nominated for Album of the Year in 2016, which instead went to Taylor Swift’s undeniably less culturally impactful album “1989.” Beyoncé also lost out on two Album of the Year awards to Beck and Adele. One artist noticeably absent from the 2021 nominees was the Weeknd, whose album “After Hours” produced the mega-hit “Blinding Lights.”

The nomination and award process for the Grammys has also raised public concern. According to Vox, Grammy membership is accessed through a yearly fee, which, once paid, grants the individual the ability to vote for nominations. However, each member of the over 10,000-person voting committee is required to vote in up to nine of the “genre” categories (Best Pop Album, Best Country Album, etc.) which means that members often end up voting for categories they are unfamiliar with and simply choose the most popular artist in each avenue.

The identity of committee members and much of their process is kept secret from the public, but in 1999 an anonymous member reported to LA Times writer Robert Hillburn that there is an additional “blue ribbon committee” who receives the top 20 nominees for each category and has the final say in narrowing them down to five. It’s worth noting that this committee is not acknowledged publicly on the Grammy website. This type of unfettered power undermines the entire system of crowd-sourced nomination and allows for racial and gender-based bias to dictate the awards.

The Weeknd made a statement via the New York Times just days before this year’s Grammys that he would no longer be submitting his music to the Recording Academy, citing racism from the secret committee. In addition to The Weeknd, artists such as Jay Z, Zayn Malik, Halsey and Fiona Apple have spoken publicly and unabashedly against the Grammys, and in some cases, boycotted the institution entirely.

Since the inception of the Grammys, the ceremony has been considered “music’s biggest night,” and a gramophone award considered the highest accolade which an artist can receive. I suggest an alternative: a collective devaluation. A secret committee of individuals with an irrevocably racist past should not be America’s ultimate musical evaluators, and neither should a massive group of individuals forced into voting for areas they are unfamiliar with. A piece of shiny metal can’t change the actual value of music, so why should we let it change our perception? Instead, take the time to seek out and honor Black, female, queer and gender-nonconforming artists (like Chika, who disappointingly did not win a Grammy this year) and support their work, leaving the Grammys for what they are: an outdated, irreverent rubric which has never reflected real artistry.