Avoiding cultural appropriation: Why you shouldn’t wear a kimono during Lunar New Year 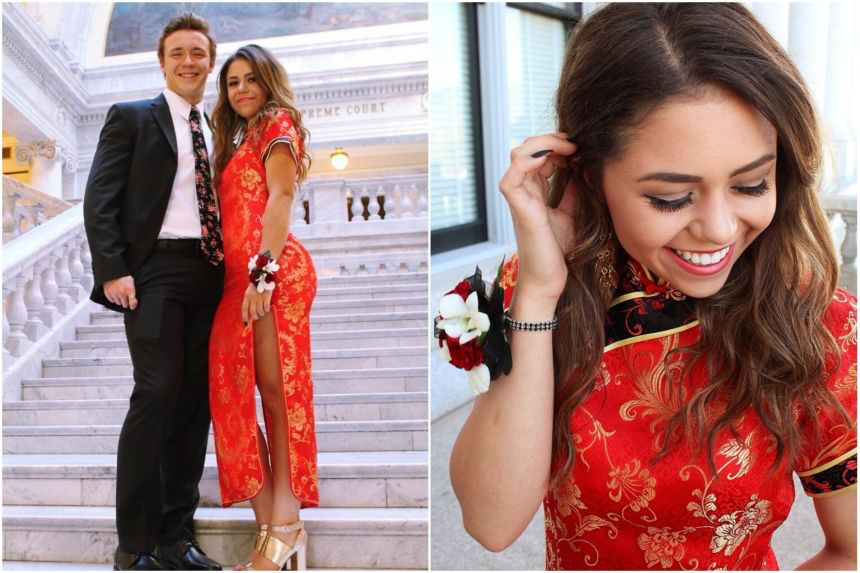 U.S. teen dons a qipao, a traditional Chinese dress as a “prom dress.”

Before groups such as BTS entered the modern media scene, Korea was as foreign of a nation as Oz to most individuals across America. Samsung was known as a “Chinese phone brand” among westerners, and Hyundai was still a “Japanese car” to many.

This was part of the reason why, when my mother saw a Caucasian girl dressed in a traditional Korean dress, hanbok, on Halloween, she was elated—an excitement I shared with her as a kindergartener. It was only many years later that I realized the problematic nature of the girl’s actions, as Kim Kardashian’s cornrows made front pages with the words “cultural appropriation” in its headline.

With the entrance of not only Korean, but other Asian cultures into mass media over the past decade, individuals of all races have taken interest in both the linguistic and social aspects of the diverse Asian countries. Emerging from Taiwanese culture was the popular drink, boba, and Chinese takeout, though frequently criticized for being heavily westernized, became a staple in the diets of many. The demand for Korean, Japanese and Mandarin language classes caused a plethora of curriculum revisions in many schools, as enthusiastic students began enrolling in such language courses to gain exposure to not only the language, but also the cultures of the countries that spoke these languages.

With the widespread attention upon Asian cultures, businesses began to take advantage of this extreme demand, “spinning off” many elements of Asian tradition to monetize. PrettyLittleThing released a collection with British girl band Little Mix, which featured many items resembling the material of the traditional Chinese dress, the qipao. These items were highly sexualized, and altered to be provocative to viewers—one of many examples of the alteration of Asian culture for monetization by (often white) titans of fast fashion.

Accompanying the fast fashion trends are Caucasian individuals who wear Asian traditional clothing as a “fashion statement” or a “costume.” Even today, it is very common to see white individuals posting pictures in a sexualized version of a kimono or a qipao (traditional Japanese and Chinese dresses, respectively) for Halloween. By reducing valuable elements of Asian culture to “costumes” while being unaware of the historic and cultural values behind these garments and traditions, this portrayal of Asian culture is not only inaccurate, but exceedingly disrespectful.

Furthermore, diluting the importance of cultural elements such as these disregards the faces of discrimination that permeates society yet today. Most Asian children, including myself, are able to recount traumatic memories of being bullied for having an ethnic name, bringing foods from our home countries to school or being called slurs, frequently by both teachers and students. According to Mental Health America, racial trauma, in its worst instances, can be longitudinally linked to post traumatic stress disorder (PTSD).

It took many Asians decades before they once again became comfortable with their heritage, and many Asians still today struggle with issues of self-image due to their racial traumas. By appropriating elements of Asian culture, the power of regaining identity is nearly made a mockery of. Though these traditions and garments were an extremely large part of the reason many Asians, especially in the South, were outcast as younger children, the simple decision of a white individual to “begin accepting” the culture as their own is disrespectful and disheartening.

The more horrifying fact lies in how many Asian-Americans are still unaware of the appropriation occurring before their eyes. Though it is understandable how many Asians had to conform to fit into a predominantly Caucasian society, reshaping our identities to fit into the same cultural “box” as white individuals has resulted in many instances of blindness to appropriative behavior. Yes, the “oriental-patterened” shirt is offensive—and so is that song lyric from a white rapper that refers to someone as “chinky.”

Appreciation of Asian culture can take several forms. Learning an Asian language, observing Asian holidays and visiting Asian countries are among many respectful ways to show love towards any Asian culture. The line is drawn between the two with intent; appreciation is an attempt to broaden one’s knowledge and understanding of other, extremely beautiful cultures as a whole, whereas appropriation features the “cherry-picking” of cultural elements (choosing to appreciate a “sexy” dress while commenting negatively on Chinese traditions).

Before thoughtlessly donning a hanbok, qipao, kimono or any “oriental” clothing this Lunar New Year season, make sure to keep in mind the differences between appropriation and appreciation. Are you truly attempting to learn more about a culture through experiencing it, or reducing a culture to elements that you selectively find attractive?