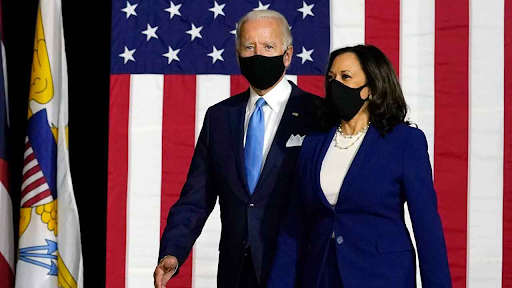 President Joe Biden and Vice President Kamala Harris both don masks out of respect for healthcare workers and safety regulations, a stark contrast to previous leadership under Donald Trump.

It’s 8 a.m. College students and teachers alike log onto Zoom for their morning classes, rubbing the sleep out of their eyes. Those with other morning responsibilities race the clock to get dressed for their job, the prospect of unemployment so much more terrifying during a pandemic. Others roll over to hit the snooze buttons on their alarm clocks, chasing the final few minutes of sleep that they can get.

Meanwhile, the average healthcare worker has been awake for around three hours, with the exhaustion from the night before catching up to them as they perform rounds on often critical patients. They count how many people have made it through the night, and log onto Zoom to watch live autopsies of COVID-19 patients. There is no definitive cure for this deadly disease, though with the right combination of fluids, pain relievers and antiviral medication, these critical patients have a chance at survival.

Unfortunately, according to Data USA, the average healthcare worker worked 40 hours a week in pre-pandemic times; these hours have now stretched for most, if not all, healthcare workers. After a long day witnessing these horrid sights, these frontline workers typically return home to quarantine from their family—a difficult sacrifice to make in a time where comfort is the number-one need of all affected by the pandemic.

This comfort was scarcely found in 2020, especially as former president Donald Trump downplayed the importance of masks.

“I don’t wear masks like him,” Trump stated at one of his outdoor campaign rallies, referring to then-presidential candidate Joe Biden. “Every time you see him, he’s got a mask. He could be speaking 200 feet away from it, and he shows up with the biggest mask I’ve seen.”

By framing the importance of masks as personal preference instead of a critical necessity within a global health disaster, Trump not only encouraged his supporters to follow his lead and to ignore the importance of CDC guidelines that require masks, but also put the health of millions of other Americans at risk. The pleas of thousands of healthcare workers went unheard as Trump rallies occurred all over the country, with  his large groups of followers frequently not wearing masks. At one Duluth rally, Trump was photographed throwing hats from a podium in close proximity to his hundreds of unmasked supporters. At the time, the COVID-19 death toll was nearing 200,000 in the United States.

It may have been easy for Trump to wield his authority next to the top doctors and some of the highest quality healthcare in the United States. However, frontline workers struggled through the most difficult days and nights of their careers. They were forced to regularly declare times of deaths of hundreds of patients, change their personal protective equipment (PPE) multiple times in a span of a minute and inform thousands of family members that their loved ones had passed away from a preventable virus.

While Trump’s failure as a leader to recognize these concerns was appalling, President Joe Biden already shows more promise in the first week of his presidency. On Jan. 20, 2021, Biden released an executive order mandating the federal workforce to wear masks during their work, according to the official White House website. In the days following this executive order, he followed up with a series of executive orders mandating the increased volume of production of COVID-19 response products, such as vaccines and personal protective equipment.

According to the Biden-Harris campaign website, among Biden’s many campaign promises were plans to instruct the CDC to establish real-time dashboards tracking ICU capacity and admission, as well as making sure that there are enough first responders to handle the capacity of COVID-19 patients in the region. These policy changes, if all followed through, would be a transformative force and saving grace for the thousands of overworked healthcare workers across the country.

Additionally, both Biden and Vice President Kamala Harris closely follow CDC guidelines, including mask-wearing. Both have been vocal on social media and in press releases in their choices to do so, encouraging others to have faith in the vaccine, wear a mask, socially distance and avoid going to large gatherings.

This is a stark contrast to Trump, who frequently refused to wear a mask to large gatherings, and an undoubted relief for healthcare workers within a fully mitigatable pandemic. With this exemplification of abiding by the CDC guidelines, as well as new lawful enforcement of these guidelines, the volume of new COVID-19 patients has already begun to drop.

According to the New York Times, on Jan. 20, Biden’s inauguration day, there were 186,912 new cases in the United States. However, on January 31, there were only 111,478 new cases. Beginning in the early days of January, around the time that Biden began his transition into office, there has been a steady decrease in the number of COVID-19 cases. Although it is impossible to cite Biden as the sole reason for this drop, there is undoubtedly a degree of influence from the transition in leadership.

As a leader who already set an example by wearing masks and taking social distancing guidelines seriously during his campaign, Biden’s presidency provides incredible hope for healthcare workers around the country. While there is no telling if the “light at the end of the tunnel” is actually close, it appears that our country has begun to take the first strides towards defeating the pandemic.