Staying social at a distance

Discord does away with isolation 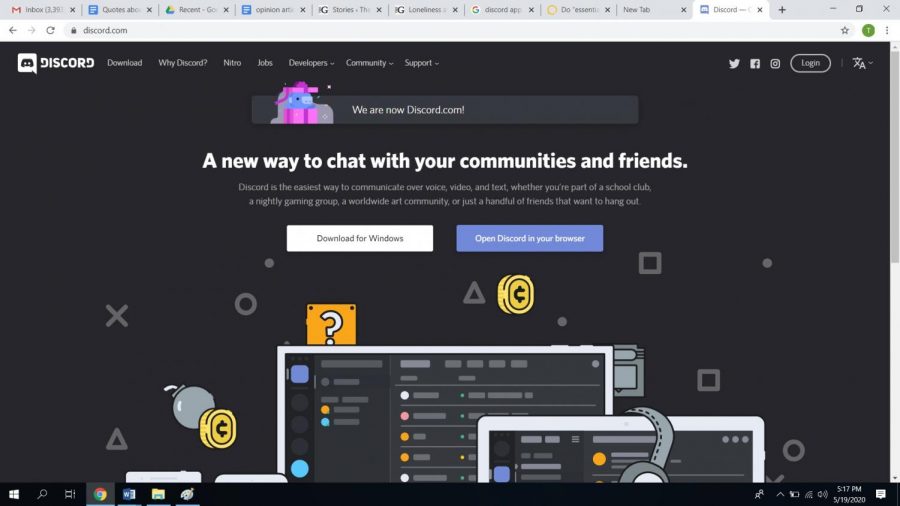 Discord allows users to interact with others in several ways, including text channels, voice channels and shared computer screens.

A lot of people have been having trouble socially distancing themselves during the quarantine. Not being able to go out and see your friends and enjoy yourself can be hard, but what about the people who don’t normally go out?

For the most part people are social animals; they need to talk to other people. But for more introverted people that isn’t always the case. Personally I can’t stand to talk to people or even be around them. I hate having to interact with people I don’t know or who I have nothing in common with. This of course poses an issue because I often have to talk to people daily, but during this quarantine that element has been eliminated. However, I am a social being, so how do I get by without interacting with people?

The short answer would be that I don’t. While I dislike most people, I still have friends that I enjoy talking to and hanging out with. The only difference is that they don’t live in the same city or state as me and some don’t even live in this country. I have friends that I met online and we are able to talk, hang out and see each other every day thanks to an app called Discord.

Discord is an app that is made for people who play video games to come together as a community and be able to have fun together no matter where in the world they are. While anyone can use the app, people originally used it to live stream video games. Discord allows you to interact with people in different ways like specific text channels, voice channels that allow you to speak to one another, and the ability to share your computer screen with friends.

Personally, I am able to sit in a voice channel and talk to my friends, have movie/anime nights, and we even have community game nights. There is always someone to talk to and everyone is welcome. Most of the time I will spend up to 12 hours just talking, playing games, watching videos, etc., with my friends. Discord helps even socially challenged people like me make friends, and it allows me to comfortably join and leave as I please. The people I’ve met are also not limited to North Carolina or the United States. Australia, Slovakia, England, Germany, and Finland are just a few places that I was able to learn about from my friends.

What a diverse group to poll! When I asked some of my friends for their Discord story they were more than happy to help. First I interviewed my friend from New Mexico, who goes by the username Lank online. Before he started using Discord he would play video games with his friends on his Xbox and that was their form of communication and community. He later found Discord and some of his friends had been using it, so they helped him navigate it.

“Now I use it as my main form of communication with friends. It’s a blessing to have because it’s so easy to keep in contact with friends in different places across the world.” Lank said in the interview.

The second person I interviewed goes by the username Hummus, a very unique name for a very unique guy. Hummus is from the Netherlands but currently lives in Finland. He used to play video games while using Skype to talk to his friends, but it was very difficult to do.

“So when Discord was first released we were quick to jump ship and were very happy with how it performed, although in functionality nothing much changed except for the medium we used,” he said.

Because most people who play video games knew about Discord before the pandemic nothing really changed for us. We just do what we normally do and all that really changes is that we’re home more often.

Discord is an amazing app that can help during a time where you are unable to go out and see your friends. You can still have movie and game nights, share pictures and videos, talk to and laugh with your friends, and meet people from places you’ve never been or heard of. Even when most people are feeling alone, I’m spending every day laughing and hanging out with my friends.