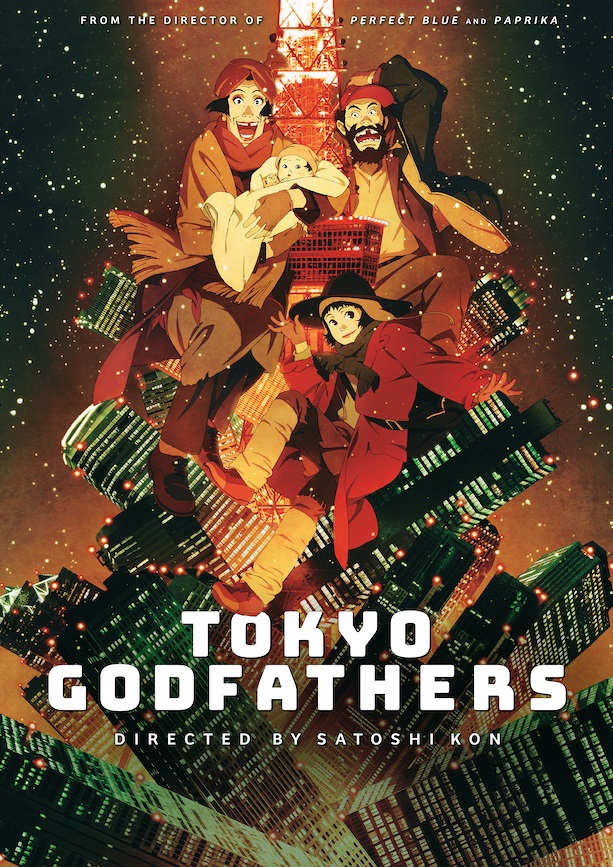 In August 2019, the second anime movie directed by Satoshi Kon, “Millennium Actress,” was translated and dubbed in English by the company GKIDS. In March, the group translated his third film, “Tokyo Godfathers,” with a limited dub and sub release in theaters. I was lucky enough to make it to one of these limited screenings in Greensboro to see another heartwarming classic from the late director before the coronavirus pandemic put the area into full lockdown mode.

The film stars three homeless people, each of different backgrounds yet all with some form of loss or regret that brought them to the streets of Tokyo. Miyuki, a runaway teenager; Hana, a transgender woman and Gin, a father long since down on his luck, stumble across an abandoned baby one night. Through a series of coincidences and wild set pieces, our characters’ pasts unravel before leading to a string of powerful conclusions for everyone involved.

The characters’ diversity not only comes in the form of their personalities but in their identities as well. Beyond the main trio, we see Hispanics and people who are implied to have their legs lost and replaced with metal body parts. While many characters can be brash and violent, there is a sympathetic quality to each one, even those who serve as antagonists in different parts of the story. These three-dimensional characters not only help lend interesting and positive representation to groups lacking it, but the characters also help to sell what makes this film so genuine.

The three main characters are seen as the lowest of the low, disposable trash who wander the streets without a home as they smell and mooch. Yet each of them, flawed as they might be as people, care about one another and about finding whoever abandoned the baby they encountered.

Hana is prone to anger when dealing with homophobia and men who turn out to be deadbeats. Miyuki is a bratty teenager who mouths off at everyone and refuses to return to her family. Gin is a gambler, a drunk and the most eager to abandon the group’s endeavors. When we learn what led them to where they are now, it’s hard not to sympathize with them. When they reunite with someone from their past in a pivotal moment, it’s hard not to choke up. When they risk their lives for each other and for a baby they practically just met, it’s hard not to cheer for them.

These sympathetic portrayals of people ridiculed or seen as problematic in society, and depictions of those who serve as antagonists in the story, add to the film’s sense of humanity. This tender, humane quality is further represented by the film’s art direction, which along with the visuals in general was done by a Studio Madhouse team as they took pictures of everyday scenery in Tokyo.  The animators would often recreate these images to add a sense of vibrance and life to the world the characters traversed through.

This beautiful yet almost naturalistic city ambiance is further helped by the direction of the legendary Satoshi Kon, who created several impeccable shots of stillness in the city as the movie’s characters roam around, bickering. Even more impressive are the big set pieces where everyone is running frantically due to a new revelation, like the identity of the baby’s mother or a so-called ally kidnapping one of the main characters. There is an impressive level of weight and breathlessness in the animation of the characters as they chase down whatever antagonist they are facing.

This frenzied nature depicted in the animation also applies to the writing itself. The film is strung together by a mountain of coincidences. While that would normally be a bad thing in lesser scripts, as they would contrive scenarios without proper rhyme or reason, that is not the case here.

New clues regarding the whereabouts of the baby’s parents, and new revelations or encounters related to our heroes’ pasts, are drip-fed during crucial moments. Each of them lead to magnificent character moments and payoffs that make it difficult to avoid tearing up or watching in awe. What helps is that each character has a pivotal moment in the film’s climax, and multiple character-defining moments in general as the film’s narrative changes and evolves.

“Tokyo Godfathers” is a chaotic movie and a wonderful showcase of humanity. As crass as its main leads are, it becomes difficult not to get invested in these complex characters or the ever-evolving narrative. The wonderful visuals from director Satoshi Kon and Studio Madhouse further add to the frantic yet tender nature of the film.

There are other details I could gush about, such as the plethora of hilarious gags present throughout the film, or its pleasant and fitting soundtrack composed by Keiichi Suzuki. However, there is only so much I can write without delving into spoilers or running out of room.

“Tokyo Godfathers” is another masterpiece by one of anime’s finest directors, and when the Blu-ray comes out in June, I encourage you to pick up a copy and experience this classic for yourself.