‘Uncut Gems’ takes us for a ride: Adam Sandler gets his win 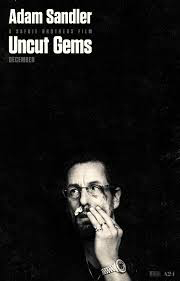 When I mentioned that I wanted to see “Uncut Gems” to my friends, my interest was immediately met with hesitation and discouragement. “Oh god, Adam Sandler?” Yes, Adam Sandler.

“Uncut Gems” has easily made it to the top of movies I find to be enticing. It is truly an incredible experience rich with an intensity that brings on sheer anxiety to a point where viewers may be incapable of staying still in their seats. To say that I was glued to my seat captures the right sentiment, but on a literal level could not be further from the truth.

The Safdie brothers, known more recently for their work directing “Good Time,” that indie emergence of Robert Pattinson we all noticed back in 2017, have delivered another fast-paced, colorful movie likely to capture the attention of any moviegoer.

They lead you in with a scene of a mine in an uproar, the African landscape bustling with dirt and grime, to introduce you to the titular device of the movie, a piece of opal that Sandler’s character gets his hands on as a jeweler in New York City. How does this get me to the exemplary scene of angry New Yorkers all yelling at each other? The camera dives into the gem in a spectral scene of psychedelic light refraction with a synth-score that melds your mind into a state of intrigue.

From there we meet Sandler’s character, a jeweler named Howard Ratner. You might think that a serious Adam Sandler is unheard of, or perhaps without any likelihood of success, and it is exactly in that way that Sandler works his way into this tumultuous role.

Much like Sandler, Howard Ratner is a boisterous Jewish man who belts out with a disarmingly raspy voice from an altogether unimpressive face. He is not beautiful, he is not suave and yet he is as charming as he is tenacious.

The movie centers around Howard’s need to win, and doing business with those wins are self-evident, be it a pro basketball player or even just a gangster.

Watching Howard scramble through any number of Manhattan scenes and fast-paced situations filled to the brim with danger, you can’t help but be mystified in the moments where he finds a second of calm and that strangely off-kilter synth starts playing again.

His win is one built on perfect circumstance and hard work, on reputation and status and above all on opportunity. And he chases it relentlessly all while navigating family, business, friends, sex and watching as it all inevitably bleeds together with one blunder after another.

It brings to mind Sandler’s filmography and looking at Howard Ratner, you can’t help but think that he must have been doted upon heavily as a younger man, only to find that all his charm gets him in middle age is the capability for quick cash-grabs and tedious entertainment that amounts mostly to distraction from a withering talent.

To go further with any specifics would mean spoiling this deliciously intense ride of a film, but suffice to say that it is a ride you would not want to miss. This is the perfect underdog story to rival even films like “Birdman,” which similarly offered an unimpressive has-been navigating ego-highs and nay-sayers of his grappling for just one more win.

With “Uncut Gems” comes a revelation for those who disparage Sandler as an actor. This is how Adam Sandler gets his win.