In the wake of Westboro, there is a lesson 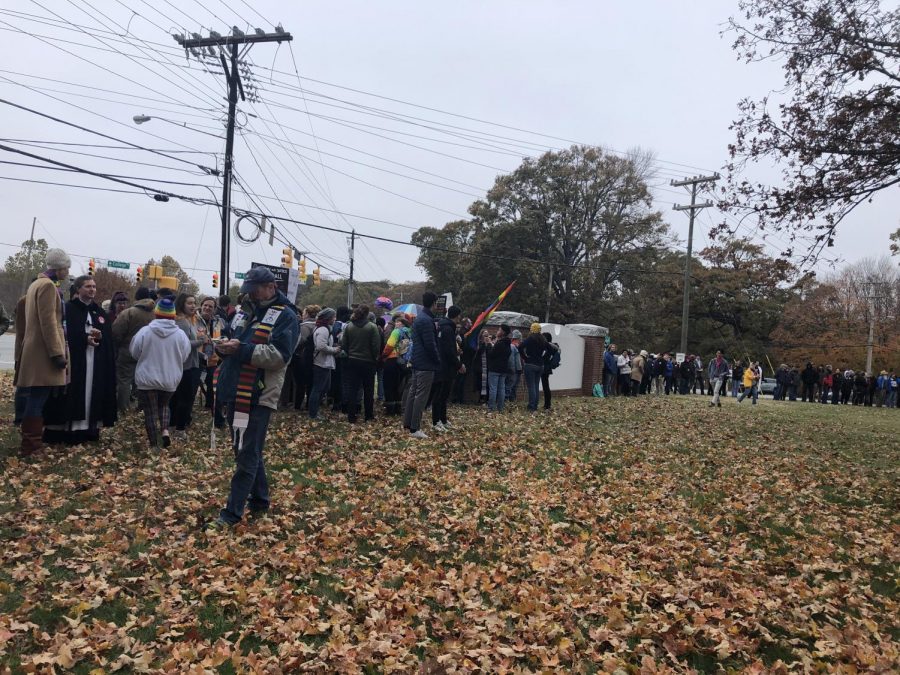 The love barrier made during WBC’s recent visit.

Large, angry signs, protests at military funerals and online tracts decrying the world’s descent into immorality all construct the outward identity of the Westboro Baptist Church. They refer to themselves as an “Old School Baptist Church,” claiming to adhere to the Five Points of Calvinism.

Yet, their deceased founder, Fred Phelps, was actually ordained by a Southern Baptist church, and despite his claim of being an Old School Baptist, his teachings were condemned by other Old School and Primitive Baptists. In August 2013, he was excommunicated from his own church following his declaration of support for the Equality House, a rainbow emblazoned space created across the street from the Westboro Baptist Church.

It is rightfully on the Southern Poverty Law Center’s website as an anti-LGBT hate group in the United States, but its own individual influence is decreasing.

Since 2004, over 20 members have left the church, many of them family members of Fred Phelps. Even within Guilford College’s Barrier of Love, many have said that they couldn’t even see the three picketers who gathered. Shirley Phelps-Roper, the daughter of founder Fred Phelps, stepped down as the lead spokesperson of Westboro Baptist Church following a power struggle in the organization and issues relating to her age.

So, where does the presumed power of Westboro Baptist Church come from, and how did it rise as an institution? In a word, lawsuits.

Fred Phelps was an attorney himself, as is Shirley Phelps-Roper and ten of his children. In an ironic twist, he was a civil rights attorney who started the Phelps Chartered Law Firm. Where it used to take on cases of racial discrimination by school systems and racially motivated police brutality, it is now used to sue communities that the Westboro Baptist Church pickets against, particularly when they violate their First Amendment rights.

The Phelps Chartered Law Firm used to have five attorneys, all of whom were Fred Phelps’ children, and now it only has three. However, having a firm that not only serves to fund the activities of the Westboro Baptist Church, but also provide complimentary legal support, has been invaluable in the rise of the Westboro Baptist Church and in preventing its complete descent during this current plateau.

In discovering what we can learn from this provocative institution, perhaps one of the most important lessons is that any ideology isn’t just sustained by the passion of its speakers, but also by their position in the public sphere and how they manipulate it for their own benefit.

Whether we are charting the rise of religious institutions, hate groups or the many intersections that exist in between, it is important to understand how policies and public attention can enable and disable groups so that marginalized populations can best equip themselves to be able to deal with these organizations and fight fire with fire.