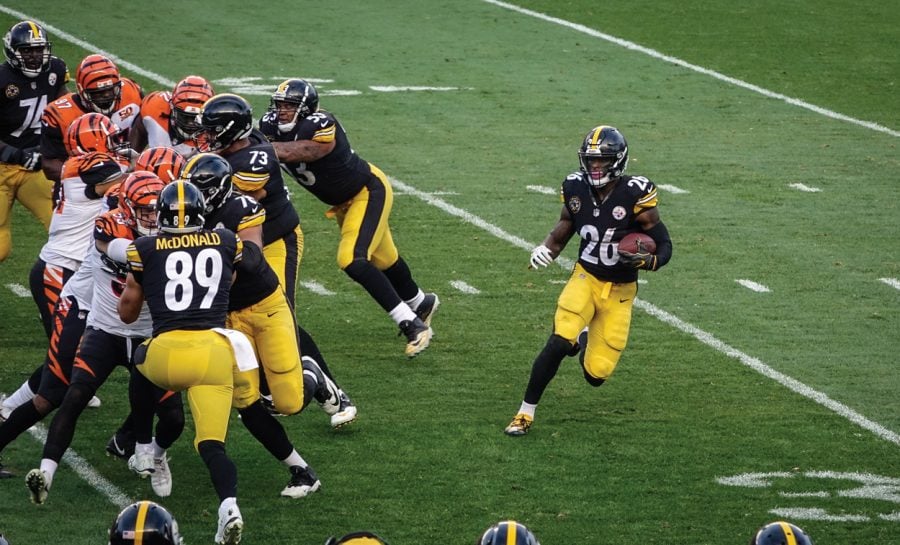 Former Pittsburgh Steelers running back Le’Veon Bell runs against the Cincinnati Bengals on Oct. 22, 2017. He was signed by the New York Jets on March 13, 2019 to a four-year, $52.5 million contract.//Photo Courtesy Scot/Flickr

The New York Jets have signed running back Le’Veon Bell to a 5-year, $52.5 million contract. Formerly a member of the Pittsburgh Steelers, Bell has been selected to the NFL Pro Bowl three times, and when he entered free agency, he became one the most appealing players on the market. Although Bell is a very good player, he is overvalued and overpaid, and he will generate many fewer wins above replacement than his contract would suggest.

The Bell signing concludes a 2-year period of drama surrounding his contract with Pittsburgh. Drafted in the second round of the 2013 NFL Draft, Bell’s first contract expired after the 2016 season, and rather than signing Bell to an extension or allowing him to hit free agency, Pittsburgh used the franchise tag on Bell, forcing him to play for the Steelers for an additional year. Although he played in 2017, he refused to play under a second franchise tag in 2018 and forced himself onto the open market.

Bell’s contract with the Jets does not earn him $17 million per year, and it will make him only the second highest-paid running back in the NFL; give the Jets credit for that. Yet, the amount that the team is paying him is still far too high, as the Jets should not expect Bell to be as good as he was in Pittsburgh.

Consider that Bell will not have played in over a year and that nobody knows if this will cause a major drop in his production. Maybe he has lost his ability to play nearly every single snap of every single game. Maybe he has lost some of his work ethic. Both of these may not be true, but it is hard to see how missing a year will do him any favors.

More concerning than the fact that he didn’t play in 2018 is the idea that maybe his success wasn’t due to his talent, and rather, it was due to his surroundings. Pittsburgh had been a perennial playoff contender with talented veteran quarterback Ben Roethlisberger and star wide receiver Antonio Brown, but the most underrated yet most relevant part of the Pittsburgh offense was (and still is) its offensive line. In order to run the ball effectively, a team must have adequate blocking from its line, and that of Pittsburgh was ranked as the best in the NFL by Pro Football Focus (PFF). Evidence of this comes from the fact that Pittsburgh’s running game thrived without Bell. 2017 third round pick James Conner and 2018 fifth round pick Jaylen Samuels both played well in Bell’s absence behind that offensive line, and Conner matched if not exceeded Bell’s production. Meanwhile, the Jets only had the 25th best line out of 32 teams according to PFF.

Although signing Bell was a commitment of too much money, the decision is more understandable when considering that out of all 32 teams, the Jets were second only to one other team in cap space, the amount of money that a team is allowed to spend on player salaries. Even after signing Bell (and multiple other players), the Jets will still be far under the salary cap, so why not sign Bell if it makes the team better? Although this logic makes sense, there is a better way to boost a rushing attack than signing top running backs.

The one team with more cap space than the Jets is the Indianapolis Colts. The Colts have the third best offensive line according to PFF, and their rushing game is good under 2017 fourth round pick Marlon Mack. Even with all of their cap space, the Colts chose not to pursue Bell. The Colts and Steelers demonstrate that it is not necessary to invest a first round pick or over $10 million in a running back to have a good rushing game. It is more important to build a quality offensive line.

With run blocking being the more important factor in establishing the run, running backs are replaceable. Not even the best of them can generate many wins above replacement, which is why signing Bell is not worth the money that he is earning.