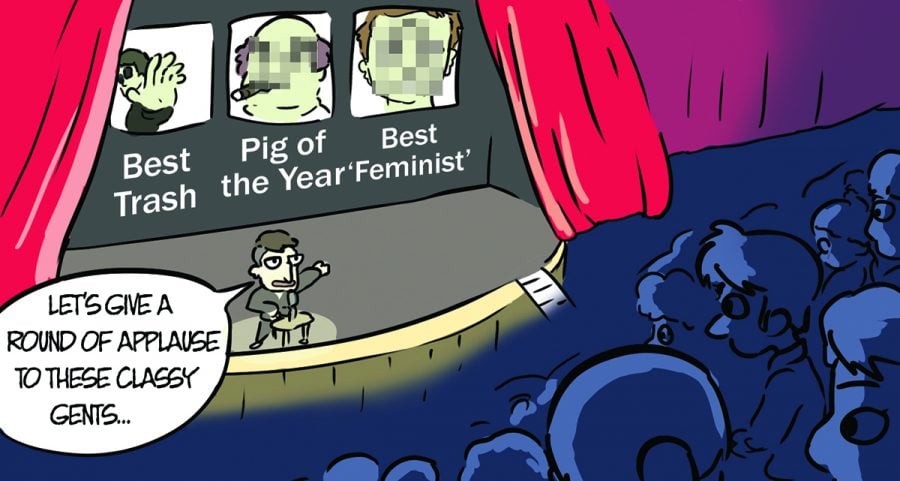 On Sunday, Jan. 7, the 75th Golden Globe Awards Ceremony, recognizing excellence in film and television, was held at the Beverly Hilton Hotel in Beverly Hills. On the cover, this may just seem like another ceremony to hand out awards to the best of the film industry, but this year’s Golden Globe Awards featured powerful messages against sexual harassment and for gender equality.

At this year’s Golden Globe Awards, there was an overhanging message against the terrible behavior of certain powerful men in the film industry and in support of gender equality and sexual harassment awareness in the American workplace.

The Golden Globe Awards this year took that message and turned it into a powerful demonstration that will catalyze social change in the American workplace in the coming years.

It is important for members of a community to speak out when an issue arises, especially when they have prominence in that community. The Golden Globes delivered that voice.

As the nationally NBC-broadcasted event drew near, many anticipated a public response from the Hollywood Foreign Press and the stars that have so much national and international influence.

The show opened with the host, Seth Meyers, acknowledging the circumstances of the show around multiple allegations of sexual misconduct in Hollywood. Meyers lightened the mood with some jokes to start off the evening, and then transitioned into the award presentations.

Many actresses shared their thoughts during their award acceptance speeches about the social media #timesup movement  against sexual discrimination inside and outside the workplace. One of the most memorable acceptance speeches came from “Big Little Lies” star, Laura Dern.

“Many of us were taught not to tattle,” said Dern. “It was a culture of silencing, and that was normalized. I urge all of us to not only support survivors and bystanders who are brave enough to tell their truth, but to promote restorative justice. May we also please protect and employ them. May we teach our children that speaking out without the fear of retribution is our culture’s new North Star.”

Dern made it clear to the millions of viewers watching at home that the kind of behavior shown by the few individuals in Hollywood, in which women were taken advantage of, is absolutely unacceptable. She sent a message, along with many other celebrities, that people shouldn’t have to be afraid to speak up about abuse of power.

Although men and women of Hollywood showed their support by wearing black, only women spoke out at the awards. A powerful message was sent to the public through the series of acceptance speeches from these prominent actresses.

Media proprietor, actress, producer and talk show host Oprah Winfrey gave an especially moving reflection on the changes that need to be carried out in United States regarding behavior in the workplace and attitudes towards the press.

“We all know the press is under siege these days,” said Winfrey. “We also know it’s the insatiable dedication to uncovering the absolute truth that keeps us from turning a blind eye to corruption and to injustice. To tyrants and victims, and secrets and lies.”

Oprah Winfrey is one of the most well-known celebrities in the nation today. After Winfrey’s speech, social media and the internet erupted with discussion about the need for awareness of sexual assault in the corporate setting.

The #timesup movement was supported not only through the moving speeches of these actresses, but also through the majority of the ceremony attendees, who wore black to demonstrate their support for the movement.

Individuals expressing their opinion on controversial issues can sway public attitude in our community and in our country. It can catalyze the social change that needs to happen to achieve gender equality in the workplace. The #timesup movement demonstrates how a group of individuals, who expressed their opinion on sexual harassment, gained the support of celebrities throughout the world at the Golden Globe Awards.

At Guilford, we would like to see more momentum built up on the #timesup social media movement in not just the corporate setting, but the academic setting as well. Frequent campus discussions should become normalized at Guilford to show that our campus is a safe environment for everyone. People should feel safe speaking up against abuse.

Emphasis on discouraging sexual harassment and discrimination by taking action and speaking up when confronted with these issues will help build better relations within our classrooms and in our community.

An important movement towards gender equality has gained large momentum. At the Golden Globe Awards, its ideas were finally projected, hopefully inspiring people to speak out against abuse and inequality observed in professional settings.