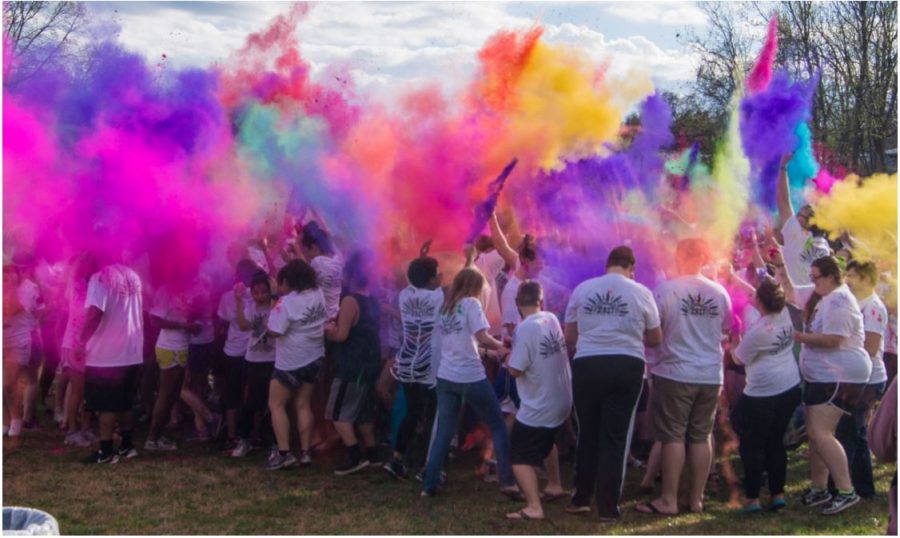 3 Inspired by the Hindu festival Holi, the Festival of Colors, that celebrates the beginning of Spring, students throw colored powder in the air at the beginning of Colorfest which took place on Friday Mar. 31, 2017 at the Lake. // Fernando Jimenez/Guilfordian

There are no open containers on the quad. Between Bryan Hall and Dana Auditorium, there are two or three groups of students. No fireworks light up the sky and no ambulances rush onto campus at 5 a.m.

It’s hard to believe this is Serendipity.

“When I was on my rounds on Friday night, I saw maybe five people between Milner (Hall) and Binford (Hall),” said senior and resident adviser Jocelyn Foshay. “It was really silent. It wasn’t like people were in their rooms pregaming. I didn’t hear voices or music or anything like that.”

This year’s Serendipity was quieter than it’s been in past years, meaning there were less high-risk behaviors by students and more students looking out for each other when they decided to take risks.

“It’s the positive stuff that I’m really proud of, students looking out for each other and making good choices,” said Director of Student Leadership and Engagement Steve Moran. “There were still recreational social events going on (on) campus that were not sponsored by the campus activities board or student affairs.

“There was awesome energy at the lake and great music throughout the weekend. I think there’s no downside to it being quieter in terms of making good choices.”

Just a few years ago, we feared we might not have Serendipity at all. Over the course of the 2014-15 school year, administrators and faculty held forums to talk about how dangerous Serendipity could be if we weren’t careful.

Although part of Serendipity is letting go and relaxing for the weekend, this couldn’t have happened if we didn’t have Serendipity at all.

The only thing we have to watch out for is our sense of community.

“It’s good because people aren’t endangering themselves in the community,” said Foshay. “The downside is that the point of Serendipity is to see everyone go out. Maybe bingo isn’t your thing and you don’t want to watch a basketball game, but Serendipity, we can all agree that that’s fun.”

However, just because Serendipity was quieter this year doesn’t mean we lost its intended purpose to bring Guilford together.

“We didn’t get an exact headcount because of how many folks were in and out, but over 500 people came throughout the Saturday night concert, and there was at least a couple hundred people on the quad for the Kendra Foster show,” said Moran.

This may have even had something to do with the atmosphere over the weekend.

“I think the turnout for the concerts being bigger than it’s been for the last few years meant that there were maybe less folks on other parts of campus making high-risk choices,” said Moran.

“So that’s a definite positive and a result of all the hard work put in by the Campus Activities Board, Serendipity Chair (and senior) Emma Ross, and the organization advisor (and Assistant Director for the Office of Student Leadership & Engagement) Tim Johnson.”

Additionally, there were still a lot of students at Colorfest and Lakefest.

“I like Lakefest,” said senior Leah-Whetten Goldstein. “That’s my favorite part. I really like hanging in the sun. It’s a lot of fun activities, and it’s all outside.”

“I didn’t hear anyone say they had a really bad weekend because there were no hospital transports or they had a negative weekend because they weren’t taking care of their friend,” said Moran. “I’m confident Serendipity will continue, but I think it’s going to take a sustained effort from the student population to uplift the positive aspects of the weekend.”

In the future, we should not have to have the threat of Serendipity being cancelled hanging over our heads in order to stay safe over the weekend. In the future, it will be up to the students to keep Serendipity fun without spending the night in the emergency room.