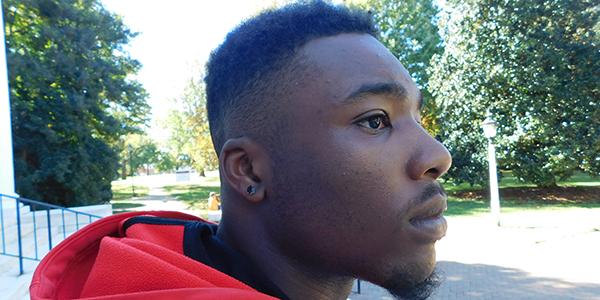 I remember that when I lived in a predominately white neighborhood in Oklahoma, I had nice long hair and bouncy curls and nobody batted an eye.

Then I moved to South Carolina and a majority black school, and I had more fingers in my hair than I thought possible. I was in a different culture, where smooth hair meant something.

It’s crazy what is accepted in society and what is denied. Clothes, food, music and hairstyles all are determined by the big wig corporations.  However, when businesses and schools begin to discriminate against a race based on how their hair looks naturally, that’s when things need to change.

Since the beginning, African Americans have been oppressed, exploited and discriminated against in almost everything we do. Why is it any surprise that society is taking shots at the way we wear our hair?

Senior Zana Hicks says this happens for a reason.

“I think a lot of the discrimination against textured hair or ‘black hair’ comes from a lack of education and a lack of representation in the media,” said Hicks.

Dreads, Afros, cornrows and braids are all popular in the black community and widely accepted socially. Rappers, singers, politicians and social media icons all wear these styles.

Not only that, but these hairstyles are appropriate for black hair.

Chemicals in relaxer, straighteners and perm treatments damage the hair as well as the scalp and skin. Natural hairstyles do less damage to the hair and allow it to grow healthy.

However, employers and schools do not always accept these styles.

“To keep my hair the same texture as it grows out of my head is looked at as revolutionary,” said actress Tracie Thoms said in an interview for Chris Rock’s movie “Good Hair.”

Now, from a business standpoint, it is understandable to have some grooming standards. After all, image is everything for businesses. If they want to attract certain cliental they have to look professional and conduct themselves professionally. That means a clean-cut, socially acceptable appearance is key.

But that doesn’t mean that black hairstyles should be cut out of the picture.

“I think it’s disgusting for institutions to alter their grooming standards when they do not understand the complexity of textured hair,” said Hicks.

As for schools prohibiting black hairstyles for children, the idea is ridiculous. These schools are discriminating against these children for the way their hair naturally grows out of their head. Children should not be subjugated to such petty standards.

It’s 2015 and the natural style is coming back with a vengeance. New social beauty norms are being established and natural black hairstyles are becoming more prominent. The real question is, with these new social norms will there come acceptance? Only time can tell.