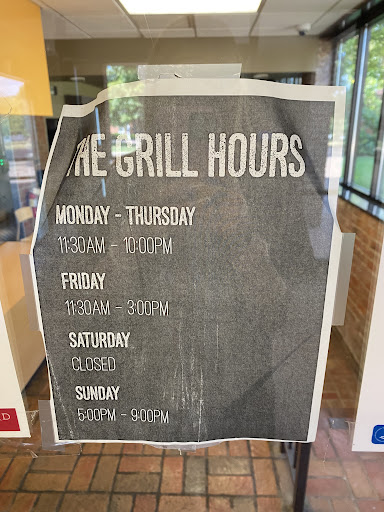 For returning Quakers, there are some noticeable differences on campus this year, one of which is the Grill’s shorter hours.

This year, the Grill is not open on Saturdays, does not open until 5 p.m. on Sundays and closes at 3 p.m. on Fridays.

Students have voiced their concerns with this change. In a poll on the Guilfordian Instagram page, students were asked if these shorter hours have impacted their daily routines when it comes to getting food. Out of 60 participants in the poll, 88 percent voted “yes.”

Alumni raised concerns about the Grill—as the main hangout spot for late nights—being taken away on weekends, which may potentially result in more drunk driving to get to food.

Guilford baseball player Larry McMillian II said that with his class schedule, he can only go to the Grill once or twice a week, and he misses out on meal swipes.

“Sometimes it closes too early for me to eat dinner,” said Guilford student Dinah Washington.

This could be an issue for many students with hectic class and work schedules and extracurricular activities. If students don’t have time to get meals at school, they may opt to leave campus to go grocery shopping, eat at restaurants or pick up fast food, which could be a safety concern as COVID-19 cases rise.

Dean of Students Steve Mencarini explained why the Grill made these changes. He mentioned that there are fewer students at Guilford this year, and also fewer students living on campus. The school has less money for the dining program compared to previous years, and fewer people applied for jobs at the Grill this year as well.

According to Mencarini, the decision was made by looking at the hours during which the Grill was used the least. Those hours were taken away to prevent a shortage of labor. He said that Guilford College has hopes of helping mitigate this problem in the future by increasing the availability of food during the hours when the Grill is closed, and suggested that students interested in working at the Grill should contact its manager, Zeb Knight.

Some students offered the idea of Guilford College and the Grill offering more meal swipe options to mitigate the issue of the Grill being open less this year.

For example, in previous years there were food options at the Grill such as sushi, meal swipe options for quesadillas, and more that are not currently being offered at the Grill. This solution could at least give students with hectic schedules more variety, so they could do things like get two meals with meal swipes and save one to heat up for later when the Grill is closed if they need it.

The Grill, along with almost every other aspect of our society, is struggling right now and facing new challenges due to COVID and its effects. What once was a thriving place for lunch mingling is now a grab-and-go offering for students to get food when in a rush. All we can do is hope that conditions and resources of labor get better during this time of unknowns.