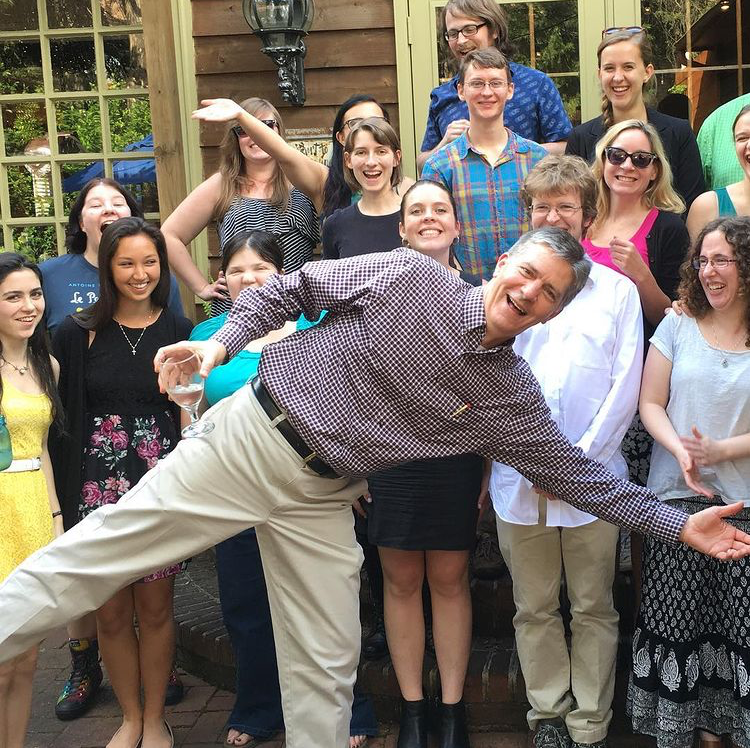 A picture taken by professor Jeff Jeske on Heather Hayton’s phone in May 2016, at the English Dept senior celebration, held at MJs Restaurant.

Dad jokes, eating a sandwich in the woods, saying “Hi” to people on campus, a total Quaker dad—ring any bells? Jim Hood, our new interim president.

Hood has been teaching at Guilford since the fall semester of 1999 and is the Charles A. Dana Professor of English.

Before that, he was a student at Guilford, graduating in 1979. He married another Guilford student, Sara Beth Terrell, who he met in the Guilford College Choir. His two children, Julia and Daniel, also attended Guilford, and were the sixth generation of Guilford students in his wife’s family.

One of Hood’s colleagues talked about what makes a good and effective college president, and how Hood is the one for the job.

“They listen to their community, understand the college they are representing and serving,” said English professor Heather Hayton. Hood hired Hayton to work in the English department 17 years ago.

“One of the things I’ve witnessed first-hand across those 17 years is that Jim listens to people,”. Hayton said in admiration.

Hayton added that Hood is a “father figure” to students and “tells really bad dad jokes all the time.”

Hood will be the second interim president this academic year.

“Jim is already a fantastic interim college president at Guilford (at) this moment,” said  psychology and anthropology professor Julie Winterich.

Winterich talked about the faculty forum with Hood, and mentioned that he adhered to the Guilford handbook by “using college committees in an inclusive and transparent way.”

From Guilford’s faculty handbook: “The College Committee structure serves as an important vehicle through which issues are discussed and decisions affecting the College and its various constituencies are made.”

Winterich emphasized that Hood is very committed to giving transparent information, which “creates and builds trust.” She believes that’s what Guilford needs.

Hood’s past students commented on the experience of having Hood as a professor.

“He was very good at getting everyone in the class to be in the discussion,” said Angela Nelson, a junior and creative writing major. “I’m definitely one of those people that’s kind of shy and doesn’t like to talk very much in class, but I felt like I could always do that.”

Nelson took Hood’s English 200 and British Romantic Literature in the past. She mentioned that Hood made his class a welcoming environment, and outside of class Nelson knew that “his door was always open.”

In the end, Hood seems to be the choice for interim president that resonates the most with students and faculty.

“I was somewhat surprised to be chosen, but in many ways I’ve been preparing for this job throughout my Guilford career,” said Hood. “I’ve worked in the administration before in strategic planning, study abroad, first-year programming and the academic dean’s office.”

Everyone has been struggling with remote classes, but Hood has a positive outlook on it.

“I’ve spent most of my professional life at Guilford, and I’ve always taught, even while I was doing other administrative work for the College,” Hood noted. “Teaching on Zoom is a challenge for all of us, but… I think my students and I are getting the hang of it. It’s all about recognizing we’re in this together.”

He is teaching two courses for the rest of the 12-week session.

For both colleagues and students, Hood is an ideal person for an interim college president. He has a history with Guilford, is a great listener, and is vibrant, honest and a great supporter of everyone at Guilford.