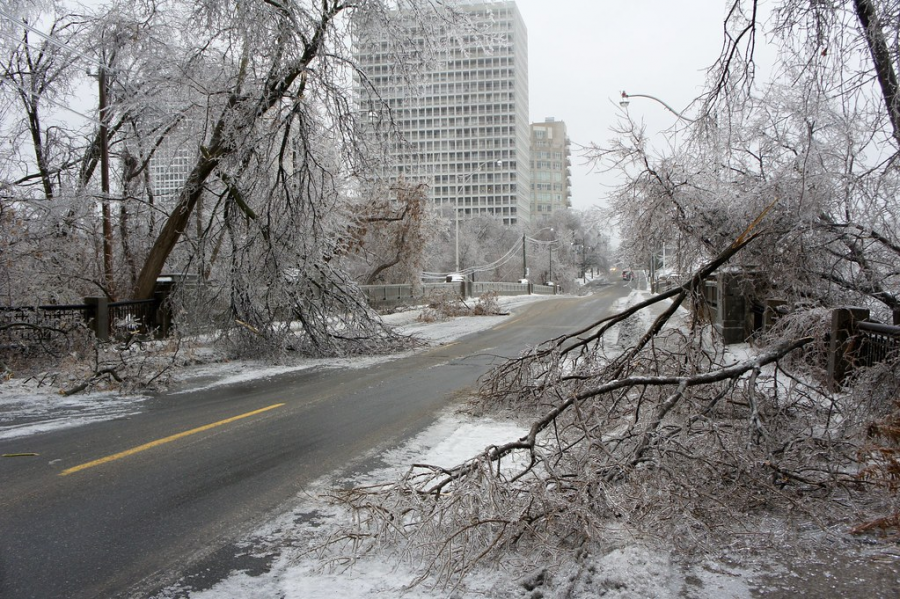 On Feb. 13, more than 190,000 NC residents were left without power as a result of winter storm damage. The Greensboro area was hit the hardest by freezing rain showers with over 24,000 reported outages. Many were forced to live without power for three to four days, according to the NC Department of Public Safety. There are also several roads and parks that are closed in Greensboro due to fallen trees and broken power lines. This has made transportation more dangerous in the past week.

“Please, stay home if you can. If you must go out, use extreme caution, and remember that blinking signals are four-way stops,” the city of Greensboro tweeted Sunday.

Like most locations in the Greensboro area, Guilford College experienced disruptions due to the harsh weather. Some buildings and facilities lost power for approximately 35 hours when trees fell onto a power grid. The outage has been difficult for some members of the Guilford community, especially now that many courses are being taught online.

Bryan W. Dodson, a student at Guilford, describes his experience during the crisis. “I didn’t lose power, but my brother lives in a dorm on the north side of campus. He didn’t have heat or electricity at all.”

According to the Guilford Emergency Alert Group, only areas on the north side of campus were impacted. However, some students living off campus were heavily impacted as well.

“The power outage last week knocked out my power from Saturday afternoon to Sunday afternoon. While my family was fine not using electronics for a few hours, the temperature dropped down to the 30s that night both inside and outside the house. Without any type of fireplace or central heat we got very cold. I walked outside the next morning for work expecting a temperature difference, but the inside and outside temperatures were the same,” Early College at Guilford junior Angelina Guerrero reports.

The loss of electricity had many negative impacts on families, especially because of the very cold temperatures last weekend. Some Greensboro residents were especially threatened by the event. “While at work, my coworkers reported also losing power, and my assistant manager had some of her friends stay over because their house dropped below 30° and they didn’t have any food that didn’t have to be cooked. Also, A tree branch landed on my dad’s car and cracked the windshield, so that was fun,” Guerrero discusses.

After a weekend of harsh conditions, many professors extended the deadlines for assignments last week to counteract the impacts of the storm, alleviating some of the stress that students carried.

“I was worried because I usually have at least 2 assignments due [on Sundays] that I could no longer work on. Thankfully, most of the assignments were pushed back,” explains Guerrero.

On Thursday, Feb. 18, another winter storm hit the triad, downing power lines and even crushing a few cars. Guilford closed its campus for student safety during the event and all classes were canceled due to the loss of internet access.

Power outages can have extreme effects on communities. These unexpected events can cause damage that may take days for workers to evaluate and repair. As utility workers are restoring power, some actions might make buildings safer for all residents during the outage. Director of Public Safety Jermaine Thomas shares a piece of advice on how to stay safe if you lose power: “Unplug all nonessential electrical equipment, televisions, and computers. Turn off light switches as a surge may blow out left-on lights and other equipment when power is restored.”