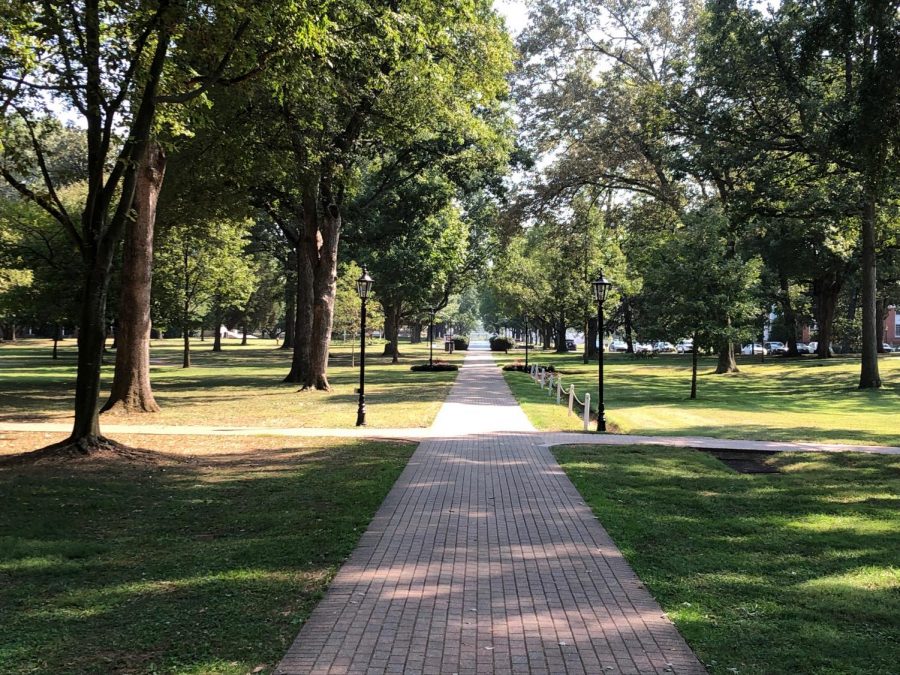 One of the many brick paths that wind through Guilford's scenic campus.

On Friday, Nov. 6, Guilford College Interim President Carol Moore hosted a Town Hall meeting via Zoom to share information and answer questions about program prioritization. With over 400 participants joining the call, it was evident that the Guilford community wanted to know more about the future of the College, and many students, parents and alumni who joined were demanding answers from Moore.

Through program prioritization and review, Guilford is cutting multiple academic majors which enroll fewer than 50 students. Majors less than five years old were not under review because they are being given more time to establish themselves.

Programs under review were required to compile data about their departments and submit a report for evaluation. These reports included criteria such as enrollment, retention, graduation, graduation placement, number of credits and general education credits generated per year, direct costs per year, external funding, relevance to the College’s mission, potential for growth, career potential and relevance to the Guilford Edge.

The programs which do not make the cut will be phased out from the Guilford curriculum.

“(Phasing out) means that we will not be bringing in any new students to Guilford in that major, and that you will work with your advisor and your Guilford Guide to plan out the remainder of your time at Guilford,” said Moore during the Town Hall meeting. “Whether you’re a first-year or a sophomore or a junior, we will ensure that the courses are available to you. It is possible that you may have to take a course through the consortium, but we will do our best to make sure your required courses are here for you.”

After this comment multiple students spoke up in the call or typed in the chat that their Guilford Guides or advisors had recently been fired.

Despite student concerns and uncertainty about the future, Moore promised that everyone currently enrolled in a major being phased out will not have to worry about completing their degree.

“Students, these changes will not impact you in a significant manner,” Moore said. “If you’re in a major that’s going to be phased out, like math… they will be phased out in a way that you can continue that major and achieve your graduation.”

Since the College is currently in a financial crisis which was exacerbated by the COVID-19 pandemic, and is millions of dollars in debt, taking this action is meant to save the College money.

According to the administration, this will maximize resources which are being used to sustain departments with low enrollment. However, this decision means that many students are facing the possibility of graduating from a college where their majors no longer exist, and where professors that they love—many of whom have tenure—are being fired.

Though no official list of staff members being let go has been released, and Moore claimed during the meeting that “the College cannot release that confidential information,” Guilford community members are already hearing rumors of professors they know facing termination. The response has been largely one of sadness and outrage.

“If it’s a question about the prioritization, what is valuable to Guilford College, it damn sure is not the administration,” said a Town Hall participant with the username Dave in DC, who identified as a ’99 Guilford alumnus. “It is the faculty, and it is the people that run the College and teach passionately and prepare us for our lifelong journeys in the career world.”

Many professors who are facing the possibility of losing their jobs have been working for the College for years, or even decades, and now will have to face the daunting task of trying to find employment in a country ravaged by the COVID-19 pandemic.

When asked about the legality and questionable ethics of firing professors with tenure, Moore responded, “It is not unheard of to discontinue tenured faculty. Guilford is no exception.”

In addition to professors being fired, Moore claimed that “63 admin had been riffed” as well. A question many students and faculty have been asking in the wake of these decisions is why the College has not declared financial exigency, and why students have been largely uninvolved in this process so far. Financial exigency is when an institution is in a financial crisis which threatens its very survival, and cannot be helped without taking drastic measures such as firing tenured faculty.

During the Town Hall, Moore shared an official list of programs recommended to be phased out. These include community and justice studies, chemistry, geology, history, French, German, Spanish, Japanese, math, peace & conflict studies, philosophy, physics, political science, religious studies, and sociology and anthropology. The deadline for departments to submit appeals is Nov. 20, and a final report about the fate of programs in question will be communicated to the Guilford community in February.

The community response to this information—and particularly the reasoning that cutting faculty and programs is a necessity to help Guilford escape financial ruin—was not a welcome one. About halfway through the meeting chaos erupted, with many people on the call unmuting themselves, asking questions and expressing their outrage all at once.

“Do not disrespect us by lying to our faces!” a passionate student exclaimed.

“Excuse me, young lady, you are not truthful,” Moore said in response. “If this is going to be a free-for-all we might as well end this meeting now.”

Another student cried out to Moore: “Why are you still here, though? Can’t we do without a president? How much are you making, what’s your salary?”

The chat was blowing up at this point in the meeting as well, with a user by the name of Nathan Hunt repeatedly posting “DO NOT PAY TUITION. STUDENT STRIKE.” This user was one of about 45 who chose to identify themselves by the name Nathan Hunt.

Amid the mayhem many community members expressed their discontent, and many tried to quell the outcry with statements including “Everyone needs to calm down!”

Eventually someone from Information Technology & Services (IT&S) was brought in to put everyone on mute. Participants then were required to use the hand raising function in Zoom and wait to be called on to ask Moore their questions.

One question asked in the managed Q&A was brought up by Guilford sophomore Leo Blain.

“Do you know who Nathan Hunt is?” Blain asked Moore.

“Yes, it’s the street I live on… I’ve heard a little bit about him,” Moore responded.

“Could you tell me who Nathan Hunt is?” Blain repeated.

“I don’t see that that’s relevant to the point, so I think I’ll pass on that,” Moore said.

“I think this shows that you really have not shown any commitment to this College’s Quaker values, because Nathan Hunt is the founder of Guilford College,” Blain stated. “He started New Garden Boarding School, he is the namesake of the largest merit scholarship at this school, the mascot is a caricature of Nathan Hunt. And if you had shown any commitment to this school’s values, or learning about Quakerism, you would know who Nathan Hunt is. I think this is clear evidence that you have not done the work to actually commit to the values of this school. That’s obvious.”

Moore answered this statement by saying “Thank you for your comment.”

More students in the Q&A expressed that they believed the decisions Moore and the Board of Trustees have been making are without academic due process, and that they go against the Quaker values on which Guilford College was founded.

The last questions of the Town Hall meeting were asked by Guilford student Queen Johnson. She brought up programs which are integral to the founding of this College and this country, such as history, religion and philosophy, before asking her questions.

“Why is a College that is built on the values of Quakerism, and one of the values is hearing the word of the many, of the people—and the people include the people who are paying tuition, the students—why is that not important?” Johnson asked.

For a majority of the questions about why these programs, many of which seem essential, are being cut, Moore provided a similar answer.

“The programs haven’t been targeted, they have been revealed. And they have been revealed to us by students deciding not to major in them,” Moore said. “… There are some things that are necessary to do for the ultimate sustainability of the College… There’s a lot of upsetness, a lot of concern, but my job and my directive is to do what is in the best long-term interest of Guilford College.”