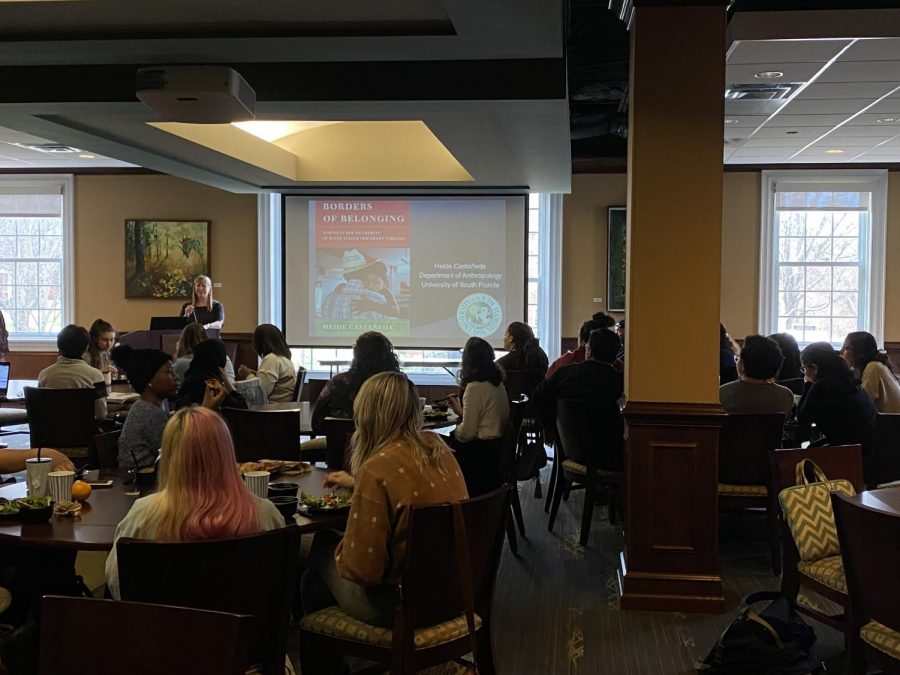 Attentive audience members listen to Castañeda as she presents her findings about mixed families.

Guilford College is a campus with a wide range of students that come from different backgrounds and the diversity is very notorious. Many of the students are enrolled in the Deferred Action for Childhood Arrivals (DACA) program which “gives young undocumented immigrants protection from deportation and work permit. On Jan 16, CPPS and HUG co-sponsored a guest talk with Dr. Heide Castañeda and provided free lunch for those who attended. With the Guilford community being affected by issues caused by mixed family status, it was a pleasure to have Castañeda, the author of “Borders of belonging: Struggle and solidarity in mixed-status immigrant families” as a guest speaker at Guilford. Castañeda touched many important points in her talk such as testimonials from a variety of families, citizens, and non-citizens that live with the same fear of deportation.

“I was looking for books on immigration, deportation, family separation and genocide for the PECS 316 Human rights course,” said Zulfiya Tursunova, assistant professor and chair peace and conflict studies. “I came across Heide Castañeda’s book ‘Borders of Belonging: Struggle and solidarity in mixed-status immigrant families.’ It reminded me of a family story shared by Daisy Arguello, Peace and Conflict Studies and Criminal Justice major,” Tursunova said. “I also lived, studied and worked in different parts of the world such as Asia, Europe, and North America. My personal experience helped me to understand how such sensitive issues can be politicized. Issues of immigration are critical when the countries are extremely divided along politics, religion, race, immigration and citizenship status, reproductive health and other faultlines.”

Many undocumented people tend to feel “trapped like a rat in a cage,” in a country where they don’t have the freedom to live a peaceful life without fear. Mixed status families also sometimes rely on their children with citizenship who might give them hope to have legal status in the country.

“There is something broken that can be fixed,” said Castañeda.

But while this has been an issue that former Guilford students have faced, oftentimes trust issues culminate due to feeling afraid to tell the wrong person.

“There are resources at Guilford but they are limited,” said Senior Berenice Fuentes, who is president of HUG. “There is the counseling center which has helped me when my family members were deported. I am a Bonner and I have built close relationships. It’s who you have built close relationships with that you can trust. For myself personally, I am careful who to tell because you never know. There are people that will support you and there are people that won’t.”

Fuentes is not the only one that has been wary under these circumstances. Many testimonials that Castañeda showed were about families not knowing who to trust.

“Families were entitled to programs but were afraid that it could affect their legal status down the road,” said Heide.

It also affected relationships like Eva’s, a 25 year old with DACA. Heide said that it affected her relationship by making her feel bad for hiding her brother’s family status from her girlfriend.

Another interviewee was afraid to tell her best friend that she was undocumented, but soon found out that her friend was also undocumented. Others would make up stories

at their school when coming back from summer break to hide the fact that they and their family were unable to leave the country. Mixed families face many serious issues such as medical attention, deportation not having higher education, and a feeling of “survivor’s guilt” for those who have citizenship. Children build up anger towards their parents for coming to the United States at the wrong time. Others feel jealousy towards their siblings for being able to attend college or being able to travel out of the country.

“Citizens feel like their rights are taken away by having to explain why they are crossing the border when it’s not really any of their business,” said Castaneda.

Many students that attended were able to relate to the testimonials shown by Heide.

“I was excited to hear the testimonials because I do come from a mixed family status.” said Sophomore Alina Santos Agua Hedionda. “I felt like I could relate to a lot of the hardships and experiences that they face. Not only focus on the hardships but also highlight the fact that there are methods and efforts to overcome border patrol and immigration policies, that try to put down families that try to pursue a better life.”

Others enjoyed that the event was unique.

“I thought the event was really different from other events that we tend to have at Guilford,”  said Lenore Ramos, a first-year student. “I thought it was very interesting, captivating and engaging. I really wanted to come because I don’t easily relate to other things that I tend to attend at Guilford. This type of event I was excited to come to because I felt like it’s something I can possibly relate to and learn more about.”