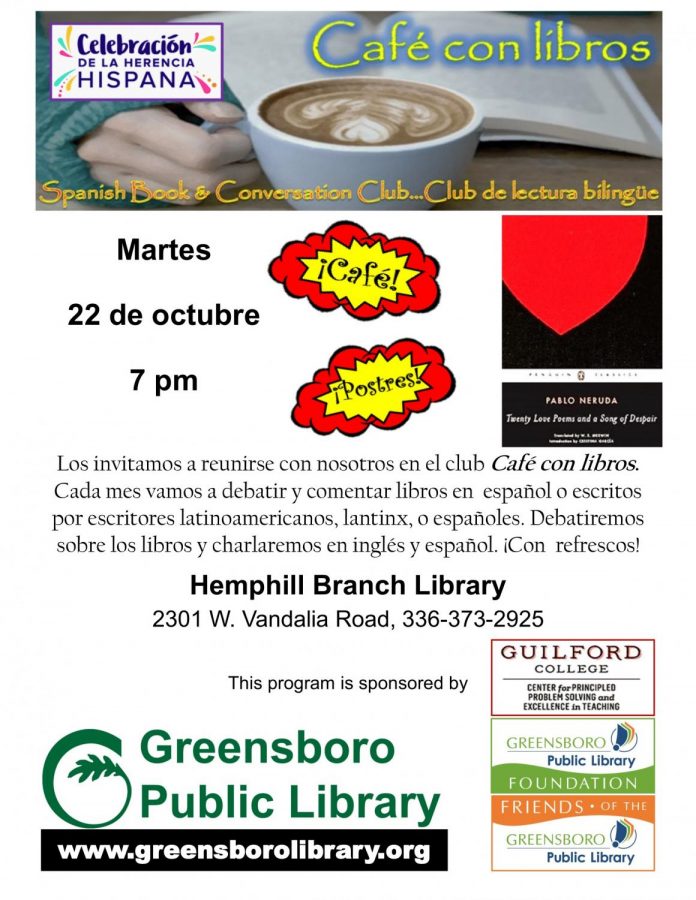 Learning a foreign language is no easy task, but the benefits are well worth the time and energy. With Spanish on the rise as one of the most spoken languages in the world, showing no signs of slowing down, it’s never been a better time to get out and improve your understanding of the language and culture. Through a collaboration between the Guilford College Spanish Program and the Greensboro Public Library, a new bilingual book club known as Café con Libros has been formed, where members can come to discuss Spanish literature, chat with friends and have a fun learning experience.

Café con Libros offers a wide variety of experience with the Spanish language, so no one will feel out of place regardless of their exposure or understanding.

“This is my first year with Spanish, so a space to practice and learn outside of class would be beneficial,” said Early College student Andrew Song.

The club also manages to help grow both new and experienced Spanish speakers, helping to form connections while challenging members in a positive way.

“We have many Spanish-speaking community members in Greensboro, and I want to create a shared public space for bilingual, thought-provoking conversations about interesting texts,” said Karen Spira, assistant professor of foreign languages and Café con Libros founder.

The meetings will take place off campus at the Hemphill Branch of the Greensboro Public Library at 2301 West Vandalia Road. They’ll usually be held on the fourth Tuesday of every month, but the schedule is flexible so that holidays and other events coinciding with those dates can be accounted for. With so many holidays coming up, the first three meetings have been moved to Oct. 22, Nov. 12 and Dec. 17, all of which are Tuesdays.

Each month brings a new selection of reads for the club, with October’s piece being “Veinte Poemas de Amor y una Canción Desesperada” by Pablo Neruda, followed by November’s selection of “Into the Beautiful North” by Luis Alberto, which also has a Spanish version. As of right now, December’s book is undecided, but plans will likely be made in the near future.

At the start of next year, Guilford College students enrolled in Spanish 310 will be participating in Café con Libros. Since Spanish 310 is one of the higher-level courses, the students will have more experience with the language, allowing them to better communicate and help other members who might be new to Spanish.

“It is a curriculum that makes literary study more democratic by bringing it into community spaces,” said Spira.

Anyone is welcome to come out, no matter their background or understanding. Even students not currently enrolled in a Spanish class can participate and are encouraged to come.

“It’s been about a year or so since I’ve taken Spanish, but it’s always fun to learn new words and practice,” said Early College student Nathan Johnson.

Whether you want to freshen up on verb conjugations or read Spanish literature with friends, Café con Libros is the place to go. There’s no need to fear judgement or ridicule, as all members are kind to one another and build each other up to provide a comfortable environment for everyone to spend their Tuesday nights. So come on over, take a load off and enjoy the satisfaction of learning a new language.

Editor’s note: This story originally was published in Volume 106, Issue 4 of The Guilfordian on Nov. 1 2019.