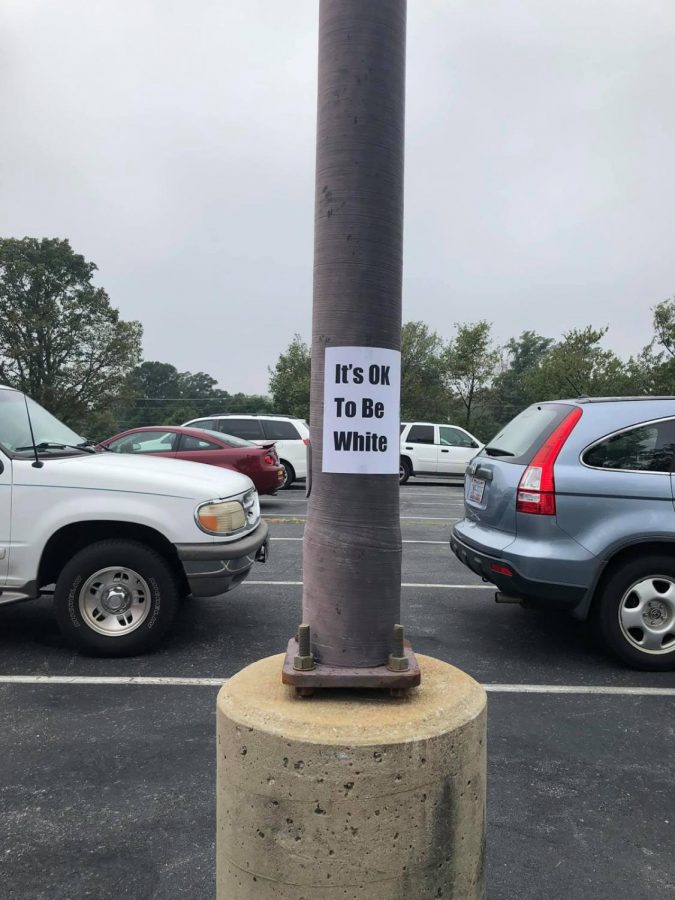 Posters saying, "It's OK to Be White" were placed in multiple locations around campus.

On Sept. 29, junior Connor Potts was parking in the Hendricks lot for their 8:30 a.m. class when they discovered a partially folded-over poster stuck to a lamppost.

“I was like, do not tell me that says what I think it says,” said Potts. “So I got out of the car. There’s a feeling you get when you see something that’s so wrong it just makes your blood boil. I pulled the poster back and it says exactly what I thought it was going to say.”

The poster, with black lettering on a white background, featured the statement, “It’s OK To Be White.” According to The Washington Post, signs and stickers with this message have been placed on high school and college campuses across the United States. This trend apparently stems from a comment in the anonymous internet forum 4chan, which suggested that people place these signs everywhere, then observe the resulting media outrage against white Americans, which would be perpetrated by American journalists and leftists. The abbreviation “OK” and its corresponding emoji were also popularized in 4chan’s anonymous message boards and in far-right spaces as symbols of white supremacy.

Potts and a friend of theirs contacted President Jane Fernandes’ office and were told to remove as many of these posters as they could find, Potts said. Potts took down posters from bulletin boards near Shore, Duke, English and Hendricks halls They also removed posters from the parking lot where the posters originally were found. After posting on Snapchat about the incident, they discovered there were posters in the stairwells of Bauman and more near English Hall, all of which they took down.

On Oct. 6, the Office of Diversity, Equity, and Inclusion (DEI) sent a campuswide email stating that concern and reactions from community members made it necessary to remove the posters.

“We do not condone communications nor encourage participation in events or behaviors that offend others and inflict pain,” DEI stated in the email.

DEI also reaffirmed its commitment and that of Public Safety and other campus resources to “ensure campus safety along with maintaining a welcoming and inclusive campus for all students, staff and faculty.”

Jermaine Thomas, director of Public Safety, explained that there were concerns about the posters’ message and how they were hung without being stamped, so they were taken down.

“Usually my guys are going around checking, and we work with Campus Life to check the landscape of the campus,” said Thomas. “We try to monitor those situations.”

Following the removal of the posters, a corresponding investigation began, led by Public Safety.

“We have suspects and the investigation is continuing,” said Thomas. “To this point, we’re leaning toward they may not have been students.”

Thomas elaborated on how he would like students to respond to similar events in the future.

Potts believes that the College’s response could have been stronger.

“The school itself needs to be very firm on saying that white supremacy is not welcome on this campus, that it will be taken seriously,” said Potts.

Potts said people should be more receptive to the idea of speaking out when something is racist. When calling their friends out, people should refer to the impact of racist messages so that people develop an understanding of what racism is.

“There’s some resistance to the term of racism, that they don’t want to be associated with it at all,” said Potts. “I am under the firm belief that everybody has racism in them, not on purpose, but we’ve learned it forever, especially growing up in the South.”

Potts believes that it is important for everyone to come from a place of working to be anti-racist.

“There are some inherent biases that happen when you grow up and you learn; you meet people and you learn from people,” Potts said. “It happens, but we have to actively work to unlearn these things and re-learn how to be non-racist.”