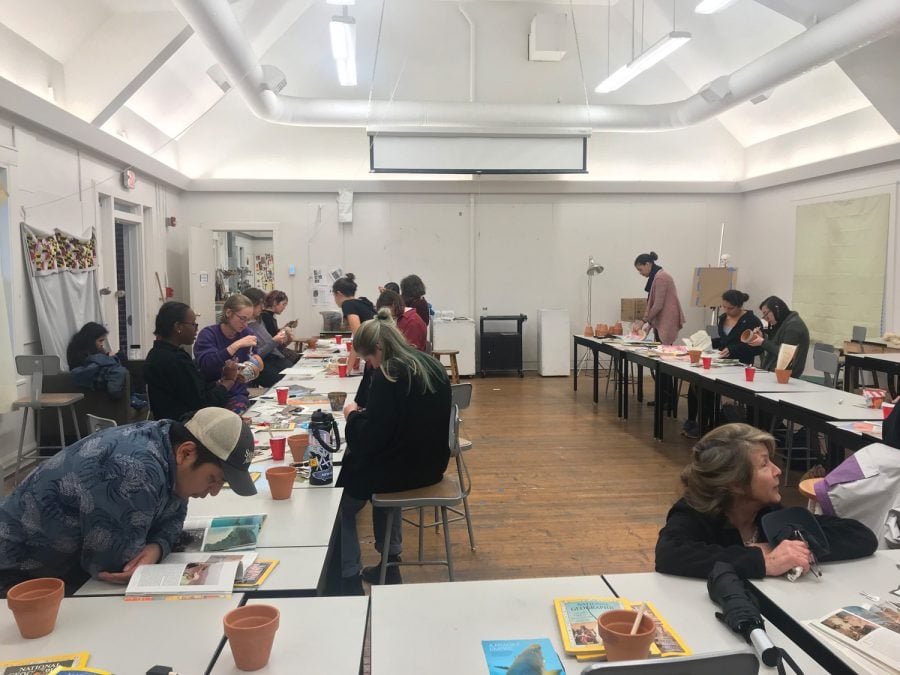 FoodStorm was held on Saturday, April 6. Students, faculty and staff came together and discussed food insecurity. This photo was taken at an event preceding FoodStorm’s opening. //Photo by: Kathryn Hurst/The Guilfordian

On Friday, April 5, from 6:00 to 8:00 p.m., Guilford students, staff and faculty, as well as members of the Greensboro community, gathered in room 202 of Hege-Cox Hall to eat ice cream, collage plant holders and take home seedlings of what will grow into things like basil or rosemary.

Those who attended not only got to enjoy the company of others while eating ice cream, but were given the opportunity to learn how to plant seeds into the pots they collaged. The event’s activities all tied in the weekend’s theme of food justice.

The event not only brought out members of the Food Justice Club, but many students from the wider Guilford community who value finding solutions to food insecurity, including junior Elanna Reber.

“I haven’t been to FoodStorm while I’ve been at Guilford, so I really wanted to come out and learn more about food justice,” Reber said. “I think it’s really important that FoodStorm is happening, especially given the insecurity where we are.”

Others who are indirectly involved in the Food Justice Club expressed enthusiasm for the event. Junior Clare Chalkley commented on the student organization as a whole.

“I came tonight because a lot of my friends are involved in Food Justice Club,” Chalkley said. “I’m not involved in Food Justice Club, but food justice is something that I think about a lot of the time. I do work with Church Under the Bridge, and I work with some food justice stuff a lot, and it’s just something that I’ve thought about a lot in my life.”

Those who were directly responsible for putting the evening together, like Sullivan, knew exactly what they were hoping attendees would take away from the event.

“I think it’s more just to ease people into the work in a more comfortable environment,” Sullivan said. “Just eating and talking.”

Other event organizers, including Ronis, were passionate about the ideas behind the Food Justice Club and FoodStorm as a whole.

“Within Guilford’s campus, (food insecurity) is a problem here, but it doesn’t seem to be something that people are all that concerned about,” Ronis said. “They’re more concerned with people on the other side of town, and I think that a really important thing about food justice for me is it needs to be destigmatized. Sort of like not ‘othering’ people who are experiencing food insecurity, because it’s really common among people we know and people we go to school with every day.”

Both Sullivan and Ronis were very hopeful for what Saturday’s FoodStorm conference would bring. Sullivan was especially looking forward to the keynote speaker, Shelly Koch, author of “Gender and Food: A Critical Look at the Food System.”

“I’m really excited about the keynote, who is a lady who wrote a book about gender and food,” Sullivan said. “I think it’ll be really cool to see the way food intersects in other aspects of our lives and identities.”

Ronis, on the other hand, was mostly looking forward to what the afternoon would bring.

“We have workshops in the morning, which are going to be really, really cool and interesting, but then in the afternoon we’re going to be doing a big community potluck style lunch,” Ronis said. “Everybody who is attending the conference will go to a kitchen on campus that’s going to be hosted by a student organization and will prepare a dish there, and then all of those people from all of those groups will come back together and share a meal together, and it’ll be really cool and fun.”

However, according to senior Elias Smolcic-Larson, the FoodStorm Conference will not be limited solely to Guilford community members.

Friday’s collaging social was full of those, like Smolcic-Larson and many others, who are passionate about food justice, making for what seemed to be a very exciting evening in anticipation of FoodStorm 2019.