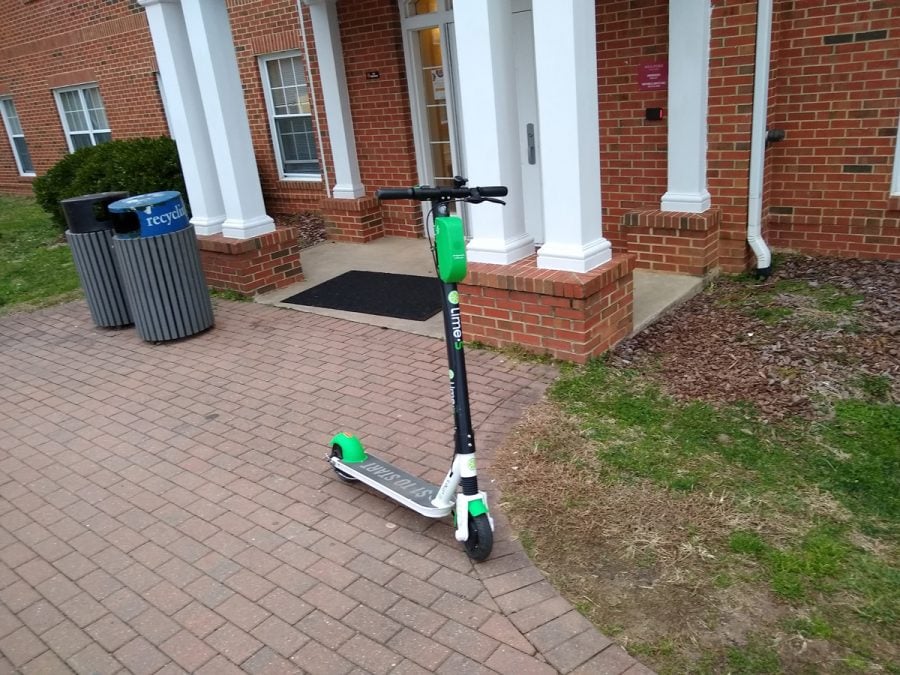 A Lime-S electric scooter sits outside of the South Apartments. The scooters are part of a pilot program by the City of Greensboro.//Photo By Andrew Walker/The Guilfordian

Guilford community members do not have to look very far or very carefully to notice the Lime-S electric scooters that have become commonplace on campus. The scooters have become a popular mode of transportation, whether as a method to get to class or as a way to enjoy getting around the community both quickly and efficiently. Yet, like all types of transportation, Lime Scooters require a degree of caution in order to ensure safety.

After receiving multiple concerns over Lime Scooter safety, Guilford is making sure that riders understand and follow the regulations that Guilford and the city of Greensboro have established.

On Friday, Feb. 8, Associate Dean of Students Steve Mencarini sent an email expressing concerns for student safety and reminding students of the safety regulations community members are expected to follow. The reminder was prompted by multiple reports of violations to Public Safety and the Division of Student Affairs.

Director of Public Safety William Anderson expressed similar sentiments, delving into various safety concerns that have emerged with the popularity of Lime-S at Guilford.

“I think the biggest safety concerns are riding on sidewalks, riding them recklessly, people riding in tandem with two on one scooter, interacting with traffic in a negative way where they could possibly be hit by a vehicle, but the biggest thing is just making sure they stay off the sidewalks,” Anderson said. “You naturally have people who may not hear them coming. They may not be able to control them, and they could possibly hit someone walking on the sidewalks.”

After receiving reports of these issues, Guilford took the initiative to clarify and emphasize specific expectations via an email alert in hopes of preventing future infractions. The Public Safety office believes that this action has paid off.

“I will say that after Steve’s email was put out, from talking to the Public Safety officers, we have seen a decrease in folks doing things that they were doing prior,” Anderson said.

Companies like Lime have placed dozens of scooters in densely populated areas including city centers and college campuses. Guilford is one of company’s target zones, and despite the safety concerns, the scooters have had a positive impact.

“They are in line with our stewardship value and sustainability and helping decrease the use of cars and fossil fuels,” Mencarini said. “It provides our students with another avenue of getting around campus in a quicker manner, and it seems like Lime scooters have been pretty popular for students, and so we want to make sure that we can continue to offer the program.”

Students expressed similar thoughts about the presence of scooters.

“One of the nice things about turning 18 was that I could try out the Lime Scooters,” said Early College student Jackson Gray. “It’s pretty expensive to use consistently, but it’s definitely more fun than walking.”

Public Safety and the Division of Student Affairs seek to appropriately balance the regulations of safety with the initial intentions Lime Scooters were brought to campus, which was to give students more freedom in how they move across campus. The two offices, along with the rest of administration, seek to find this balance and to draw a line in the respective spot.

“(We find balance by) making sure they are following the rules that Steve put out,” Anderson said. “We worked on those together as far as coming up with the list of things. We worked in cooperation with the same rules that the City of Greensboro put out.”

As the popularity of Lime Scooters continues to rise, Guilford will continue to make sure that safety regulations are met and that students can enjoy the scooters.

“We want to continue to be able to offer the program to students, but if it becomes unsafe or if there is an issue, we will need to discontinue the program,” Mencarini said. “And we don’t want to do that.”