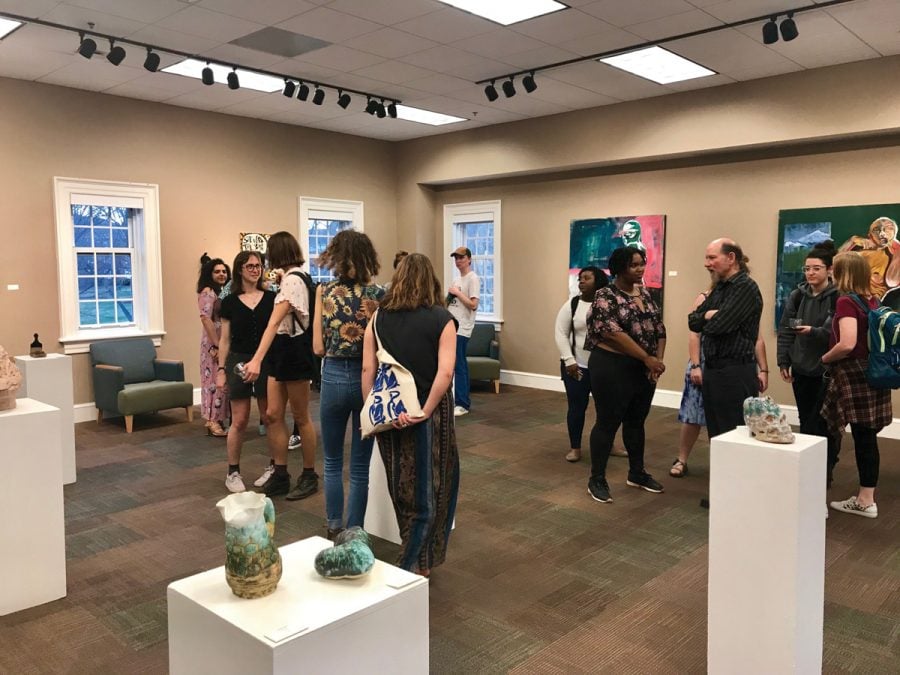 Guilford students faculty and staff come together for the opening reception of “A Different World.” Photos By: Kathryn Hurst/The Guilfordian

“A Different World: Artwork From Guilford’s Black Community” debuted with an opening reception in the Founders Hall Galleries from 5:00 to 7:00 p.m. on Thursday, Feb. 7. Curated by Assistant Professor of Art Antoine Williams, the exhibit saw a large turnout of Guilford students, faculty and staff members at the reception, which was held as a part of Black History Month’s first week of events.

With the exhibit featuring the work of 29 different black artists working in a wide range of artistic mediums, including photography, ceramics, mixed media and paintings, many saw the event as crucial to the wellbeing of Guilford’s community.

Art major and senior Mikayla Jones was one of many who supported the display of artwork by the black community. Jones has three ceramics pieces titled “David the Badass”, “Drip” and “Drowned” on display as a part of the exhibit.

“Every single year we always have art events, but you don’t really see a lot of us,” Jones said. “And you don’t really know, when you walk into the building, how many black artists are really there, so it’s just important to feel like you’re included.”

Jones continued to describe her personal thoughts on the event.

“This should happen every single year,” Jones said. “Black History Month happens every single year, and you never see this. And also it’s cool that they pulled people from Guilford who are professors or staff or alum, so you can always be included in it … All mediums are in here.”

With the inclusion of a considerable number of Guilford community members in the show, Williams hopes that many will come to view the art, which will remain on display until Friday, Mar. 29.

Williams believes in the significance of shows like this, particularly in the context of Guilford’s campus.

“I think it’s important for every group to tell their story and tell their story to everyone as honestly as they can,” Williams said. “You know, you’re seeing aspects of a particular group of people’s lives, and also in that you get to see the diversity in blackness.

“You have landscapes and photos of flowers, but you also have extremely political work, work that’s about identity, work that’s about really personal stuff, abstraction. So you’re getting to see this perception of reality from a particular group, which I think with art is extremely important.”

Williams thinks there is something in the gallery for everyone, even students who aren’t usually inclined to view art.

Junior Tenaja Henson, who has two pieces on display in the show including a portrait print called “Waiting” and a multiblock woodcut print called “Fat Pussy Energy,” expressed her support for the exhibition.

“Art is supposed to make you uncomfortable and I think a lot of this art, like the piece by Juju that was their hair tied up with condoms called ‘Now You Can Touch My Hair,’ was really empowering to see … And to see people making things about their experience of being black, you know, we don’t hear that a lot, especially at Guilford.”

Williams would concur with Henson’s statement regarding the show’s potential for empowering black voices on campus.

“All my professors were white, most of my peers in the department were white, and so it was hard pressed to find my stories in artwork. I think in predominantly white institutions, it’s important to uphold the voices and realities of people who aren’t in the majority. It also helps black students see themselves. It also helps non-black students to see black people in maybe a different way.”

Henson is happy with the work Williams has done for black representation on campus.

“You know, Antoine does a really good job of being like, ‘We have black artists. I am a black artist. I make work that’s to do this,’ to make people understand that this is more than just living, it’s an experience,’” Henson said. “I would love to see shows that highlight different races … We can have more black shows, we can have Latinx shows, we can have international shows. I want to see what Guilford can do to be like, ‘Yeah, we have students of color here who do cool shit, like let’s see it.”

As the show will remain on display in Founders for over a month, Henson also encouraged individuals to view what it has to offer.

“Go to the show,” Henson said. “Go check it out. It’s really cool. I spent time there for so long, just looking, and you can really get lost in some of the pieces. So, if you haven’t seen the show, go look at it.”