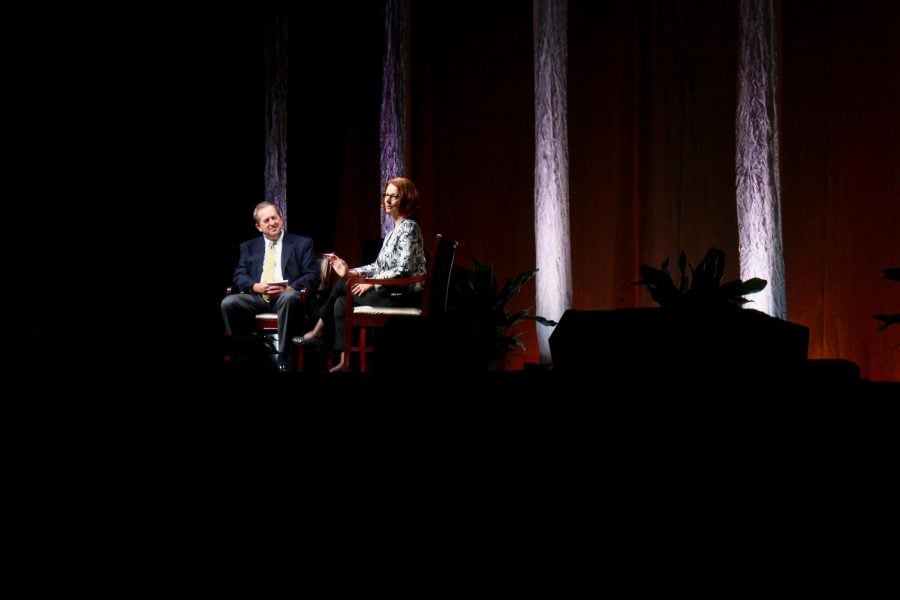 For the third installment of the 2018-2019 season of the Bryan Series, Former Deputy Prime Minister and Prime Minister of Australia Julia Gillard came to speak with the Guilford and Greensboro community. Gillard was elected to prime minister in 2010 and became the first female to ever hold that position.

“She is a real history maker,” said President of Guilford College Jane Fernandes.

“She’s a champion of education for women and children all over the world,” said Director of the Bryan Series Suzanne Ingram.

Gillard’s strong belief in education stems from when she was a child. Both her father and her mother left school at early ages, but understood it was important, even for girls.

“There were many girls around my time who were taught, ‘Don’t worry about hitting the book too hard,’” Gillard said. “’Just worry about being a wife and mother.’”

“This era in gender discrimination is very complicated,” Gillard said. “I made the mistake of assuming the maximum expression for me being a woman would be in the first few months.”

She also mentioned challenges that women face while working in politics.

“If you’re a woman in public life, it’s very hard to win as a woman when it comes to family structure,” Gillard said.

Gillard went on to discuss how radio show hosts would attack her for being ‘deliberately barren,’ mentioning how news reports focused on her appearance more often than men in similar positions.

Governing was also a large portion of what Gillard’s talk. Gillard’s time in office was marked by success and efficiency.

“I was surprised to know while she was prime minister, her government passed over 500 pieces of legislature,” Fernandes said.

In her first days, Gillard was given the advice to write down and list reasons why she was in office.

“Even on those most difficult days, I could go to that (list) and know what I was governing for,” Gillard said.

Earlier in the day before the main event, Gillard visited Guilford to speak directly with students in the format of a Q&A session. Students were able to ask Gillard questions about a range of topics, one of which included immigration.

“I think Australians are very generous of heart when it comes to asylum seekers,” Gillard said.

Gillard also said that Australia’s immigration policies are laxer, perhaps due to the fact that the island nation shares no land borders.

In addition to the topic of immigration and immigration policy, Gillard discussed the system of compulsory voting for all eligible people in Australia. She talked about how this leads to a much different form of campaigning.

“At the end of the day in Australia, you can’t win unless Mr. and Mrs. Average vote for you,” Gillard said. “If you aren’t pitching to ordinary people and their desires, you can’t win.”

Senior Spencer File attended the Q&A and was impressed by Gillard’s poise.

“I used to live in Australia and I’ve seen her give speeches before and so I was really happy to see that she’s still, even being a former prime minister, holds this air of professionalism,” File said.

File also got the chance to ask Gillard a question during the session.

“She covered everything I’d expect her to and I was really happy with what she said,” File said.

“I felt very comfortable with her, I believe her and I could understand why people would want her to lead them,” said Fernandes.

Gillard’s event ended at 9:00 p.m. The Bryan Series’ next event will be held on Tuesday, Feb. 19 at the Greensboro Coliseum. This will be the fourth installment and will feature Dr. Paul Farmer.