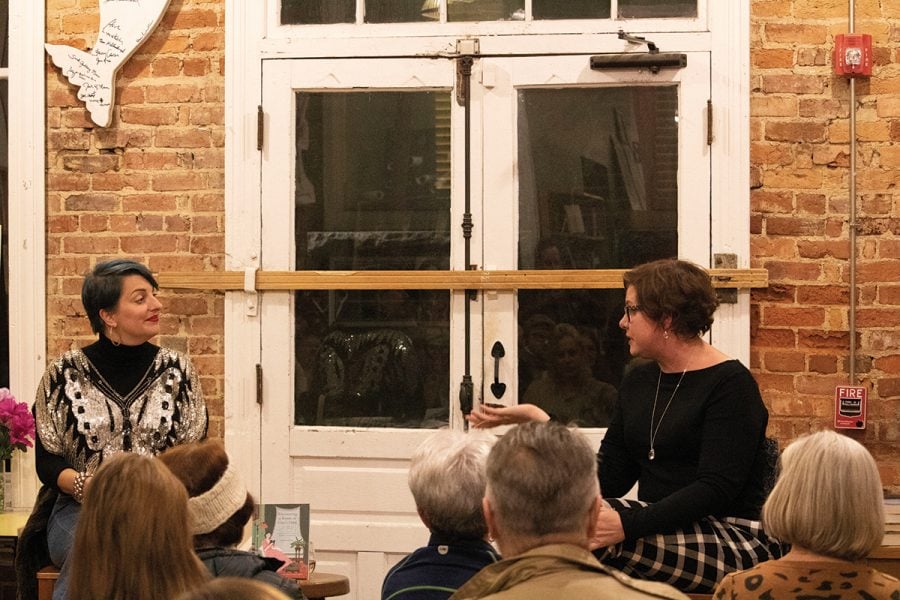 Elly Lonon (right), author of “Amongst the Liberal Elite,” discusses her novel on Nov. 9 at Scuppernong Books.//Photo by: Mohamed Togol/ The Guilfordian

On Friday, Nov. 9, Elly Lonon ’98 launched her new book, “Amongst the Liberal Elite,” at Scuppernong Books in downtown Greensboro. The book follows characters Alex and Michael, a married couple who tours the country after the 2016 presidential elections on a mission to visit the world’s largest frying pans and to understand how the U.S. became a divided nation.

The book began as a column in McSweeney’s Internet Tendency, an American publishing house founded by Editor Dave Eggers and headquartered in San Francisco known to publish satirical articles, books and periodicals online. The original column, made entirely of dialogue, reads like a play. As a graphic novel, “Amongst the Liberal Elite” seeks to bring this dialogue to life.

Lonon started writing after the 2016 presidential election. She described the role the healing power of satire played during a time she felt anger over the state of politics.

“In November of 2016, I started having panic attacks,” Lonon said. “In January of 2017, I had more panic attacks. I wanted to turn my angst and worry into a satirical piece.”

Lonon hopes her novel will bring some comic relief to the current state of politics.

During the launch event, Lonon expressed additional hopes for readers to relate to characters Alex and Michael, and to develop a love for the story and its message of growth.

“I hope readers can see themselves in these characters,” Lonon said. “Yes, they are satire and start out utterly hyperbolic and ridiculous, but as they move through the narrative, they become more relatable, more endearing. I want people to grow to love them and relate to them in a self-forgiving way.”

Lonon continued this discussion, shining light on some of her personal values.

“At least four times a day I nag my kids with our family motto,” Lonon said. “I’ll call out, ‘How do we learn?’ and then they respond, ‘By making mistakes.’ Alex and Michael make so many mistakes in this book and in the column. I make mistakes all the time. We all do, but those mistakes allow us to listen and learn and try again.

“I hope Alex and Michael’s mistakes will allow people to avoid some more common pitfalls of wokeness, but also give readers the courage to put themselves out there and make some mistakes of their own and learn and grow.”

The book launch on Friday night was open to the public, and was attended by Guilford students, staff and faculty members along with alumni and Greensboro community members.

Lydia Martin ’96 attended the launch as a friend of Lonon from their shared time at Guilford.

“I haven’t read the book yet, but I’m excited about it,” Martin said. “I did buy my copy tonight and I’ve been following the McSweeney’s column.”

“I think this book is so useful,” Honer said. “In this political climate, we all need some relief from what is usually a consistently depressing news cycle.”

In such efforts to bring out the bright side, Lonon advises young writers to persist and not become easily discouraged.

“To the aspiring women, people of color and other marginalized voices, we have a saying in one of my writers groups. Pitch with the confidence of a mediocre white man. Now, if you are a mediocre white man that probably isn’t very helpful, so I will add a second point of advice. Put yourself out there, don’t hide your art.”

Lonon continued, describing how she hopes the novel will encourage community members to move forward with confidence and courage.

“All the writing books say to find the angle of a story only you can write, the ‘Why me?’ question. Why you are you the one to tell the story? And yes, there’s so much value in that, but if you’re like me, you can find a million reasons why someone else might be more qualified. Instead, flip the question. Why not me?

“That piece you’ve been sitting on? Send it. The worst an editor can say is no.”