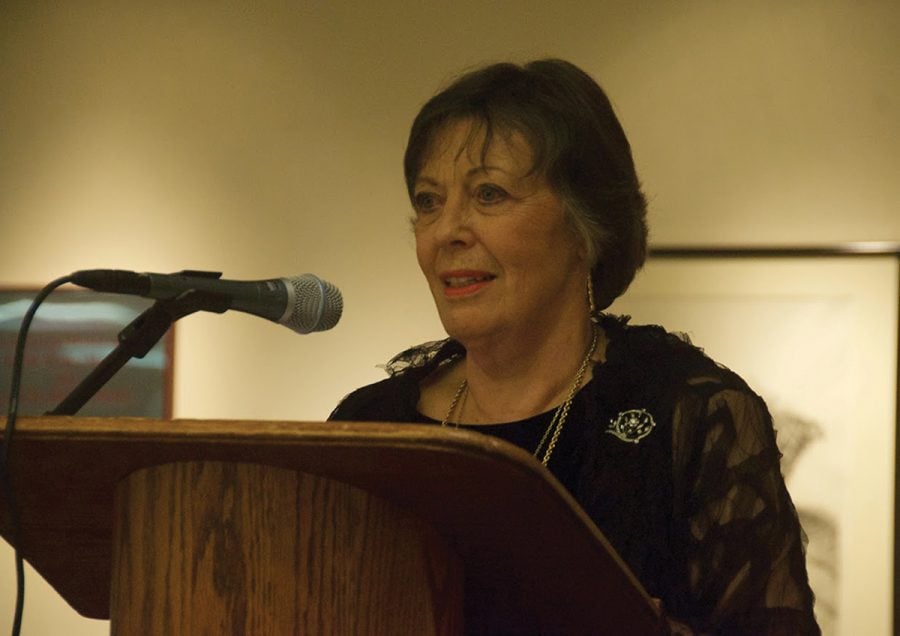 Monique Lallier thanks the people who helped set up the retrospective. //Photo By Ezra Weiss/The Guilfordian

Art Curator Terry Hammond hosted an art gallery reception in the Hege Library Atrium for world-renowned bookbinder Monique Lallier on Friday, Nov. 2. Guilford’s Art Gallery will be showcasing over 45 years of Lallier’s bookbinding designs, thanks to the efforts of Guilford benefactors Daniel and Beth Mosca, and 17 owners of Lallier’s art who lent the pieces to Guilford’s Art Gallery for exhibition.

Lallier started her bookbinding journey at the age of 17 and has been recognized for her innovative use of colors and techniques to represent the stories of the texts she has read. From Shakespeare’s sonnets to Jhumpa Lahiri’s “Interpreter of Maladies,” Lallier has created a range of dynamic and distinctive bindings, several of which are now on exhibit in Hege Library. The pieces displayed were drawn from both private and institutional collections.

“The exhibit illuminates how she is open to new techniques and unusual materials in her bindings,” said Lallier’s husband, whose work has also been displayed at Guilford. “From eggshells to pewter, one of the more important aspects of her work is her ability to construct her bindings to the highest standards of quality.

“I am somewhat biased, but this exhibition proves without a doubt that Monique’s work is ranked very high in the world of design binding.”

At the reception, attendees were invited to take a look at the exhibit and explore the wide range of styles and materials Lallier has incorporated over the years.

Just as many attendees took note of the various colors and aesthetics of the bindings, former librarian Robin Cagle analyzed the various techniques Lallier incorporated into her work.

“The exhibit is pretty incredible,” Cagle said. “I was trying to look at how some of the pieces were put together from the little I know how to do. I used to be a librarian, but I did a little repair of our collection, basic spine repairs and putting pages back in, but nothing like this.”

Jin Hu, a student of Lallier, echoed Cagle’s remarks about the originality of Lallier’s bindings.

“What makes Monique very unique is that she doesn’t have a particular style with her bindings,” Hu said. “While many bookbinders establish their own style and fame and will repeat it, what impressed me most is that all these bindings were made after she turned 17 years-old, which means that she kept experimenting different techniques.”

After attendees of the reception had a chance to view Lallier’s pieces, Hammond, Etherington and Lallier spoke briefly about the backstory of the exhibit and the importance of bookbinding as an art form.

“Bookbinding is not a blank canvas, you need to convey the atmosphere of the book,” Lallier said. “This is why I like the exhibitions so much because everyone is binding the same book and you can see the creativity in the many interpretations of the same text. It’s always fascinating.”

Cagle expanded on Lallier’s points about the uniqueness of bookbinding as an art form.

“Everybody needs art,” Cagle said. “Everybody needs to be able to think. Art definitely gives you a new way of looking at the world. And this is not a traditional art, which I think is even more important.

“I think a lot of people don’t even pick up books anymore, they just read online and on tablets. And this is an important art that I hope is never going to get lost.”

While many of the collectors of bookbindings pay close attention to Lallier and her art, Hammond shared her experiences with some students she’s encountered in Hege Library.

“While I have been installing it, I’ve had conversations with people looking at it, and many students are totally unaware of what design bookbinding is,” Hammond said. “They don’t understand that these are handmade, one-of-a-kind objects that are the bookbinder’s interpretation of the author’s text.”

Lallier’s retrospective bookbinding art exhibit will be on display in the Art Gallery from Oct. 29 to Jan. 6. Hammond welcomes all community members to stop by.

“I want this exhibit to not just be for these people who are collectors and who have known Monique for so long,” Hammond said. “They appreciate it because this is the first time they have got to see all these works together in one place, but I also want to open people’s eyes to this underappreciated art.

“The exhibit might just get someone realizing that bookbinding is a true art form.”