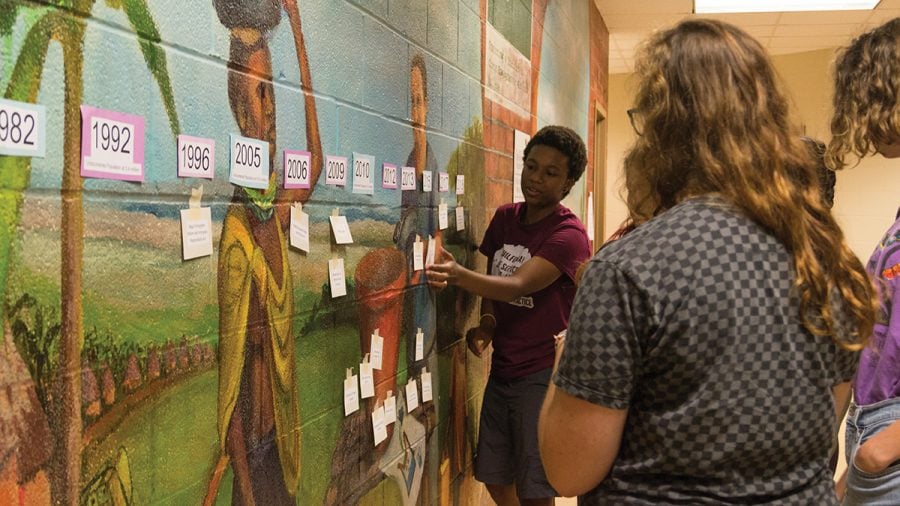 Senior Olivia Winder participates in an interactive timeline activity that explores legislation affecting the immigrant community. This activity was part of the UndocuAlly training that took place on Monday, Oct. 1 in King Hall. // Photo By: Fernando Jiménez/The Guilfordian

According to the Pew Research Center, there are approximately 11.6 million undocumented immigrants living in the United States today. These individuals are present in our communities, our jobs and even on Guilford’s campus.

Immigrant Student Coordinator Liz Torres Melendez led one of the first UndocuAlly Trainings hosted by the Intercultural Engagement Center on Monday, Oct. 1 in King Hall. The training session sought to help raise awareness of ways community members can be allies to the undocumented community specifically at Guilford while informing attendees of current state and federal immigration legislation that impact the lives of undocumented individuals.

“This is a training that has been popping up nationally, starting in California and making its way to other college campuses,” said Torres Melendez. “This came about because of the rising number of undocumented students in college, it came from a need to understand those students’ situations and understand how we can use the institutions and our power to advocate with those students so that they are treated fairly, and they have the same access as others.”

The training began with an introduction to terminology that provided a better understanding about what it means to be undocumented. Being undocumented refers to a person currently present in the United States who entered without inspection or a person whose paperwork has expired. Attendees were also introduced to the concept of being an UndocuAlly, which is someone who understands the situations many undocumented students are often faced with and makes an intentional effort to create inclusive spaces and pedagogies.

Senior Mikayla Jones attended the training in order to get accurate information around immigration and the undocumented community.

“I have friends that are undocumented, and I remember that last year I didn’t know how to help them, I didn’t have the information or research to be an ally,” said Jones. “This training allowed me to reflect on how ignorant I used to be around this issue and it provided me with information on how I can better support my undocumented friends.”

The workshop also explored national and state immigrant legislation, providing insight into how difficult it often is for an undocumented student to pursue a higher education.

In 1982, the Supreme Court ruling of Plyler v. Doe guaranteed the right of all students to have access to a K-12 education regardless of immigration status. However, legislation in various states, including North Carolina, states that undocumented students must pay out-of-state tuition when applying to a public college or university. Additionally, undocumented students do not qualify for federal aid and are not eligible for most scholarships due to their immigration status.

Junior Raina Baier expressed how hard it would be been to attend college without financial aid.

“I wouldn’t have been able to go to college if I had that additional financial stress,” said Baier. “I simply can’t imagine that. I had no idea that undocumented students had no access to FAFSA or in-state tuition in North Carolina.”

More UndocuAlly training sessions will be offered next semester, including sessions for faculty and staff. Torres Melendez hopes to facilitate sessions in different academic departments so that professors have knowledge around the undocumented community and can employ it in their advising strategies and in their classrooms.