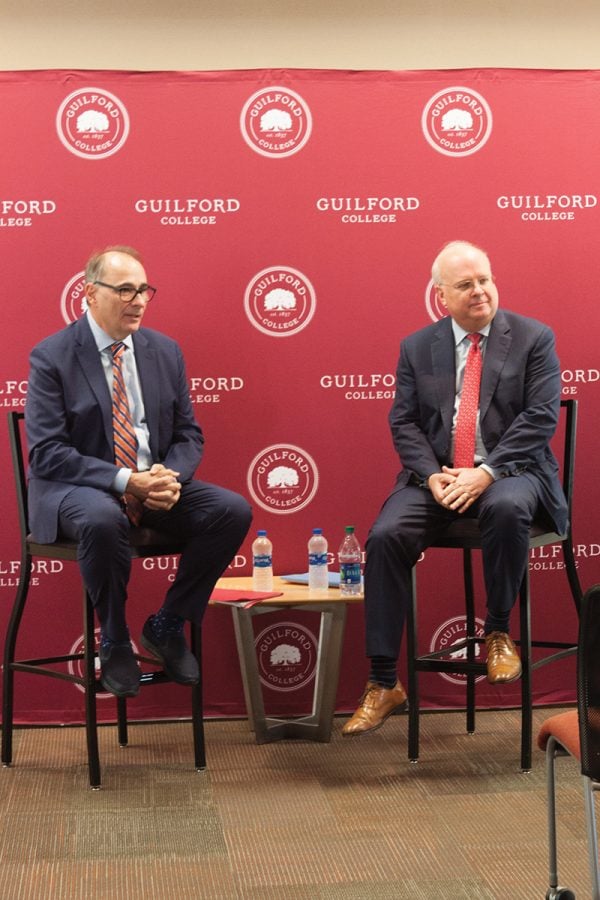 In addition to the main Bryan Series event, speakers David Axelrod and Karl Rove spoke to students in a Q&A format. Guilford hoped the two would create positive political dialogue.

According to the Guilford website on the Bryan Series, “(Axelrod and Rove) bring more than keen insiders’ perspectives; they share the ability to spar respectfully and with an open mind to sound arguments,”

Both speakers were asked to talk about their experiences in the White House.

Rove was with the president the entire day and passed along the news as the planes crashed into the World Trade Center.

Axelrod chose to focus on the Obama administration taking on health care reform. Axelrod’s child was diagnosed with seizures from an early age. While Axelrod had health insurance, the insurance did not cover the medicine cost and they were forced to pay almost $1,000 extra out of pocket a month and almost went bankrupt as a result.

“I could hear the cheers coming from the other room after the final votes came in and I broke down and cried,” said Axelrod. “And as Karl will tell you, there isn’t crying in politics.

“I told the president ‘Thank you for doing this and making it so others won’t have to go through this,’ and he said, ‘That’s why we do this.’”

The speakers shared stories about their times in the office. Rove told one story about stealing and moving a co-worker’s car. Axelrod told a story about a time Obama walked-in on him holding a turkey leg and asked if he was, “in King Henry’s court.”

After being asked about an incident in June where Sarah Huckabee Sanders and her family were asked to leave a restaurant, the two shared experiences where both have been discriminated against because of their roles in politics.

Rove said that a mayor in Texas almost prevented him from building a house because of his views.

Axelrod had an experience where he was accosted in public.

“I remember taking my children to a Bears game,” Axelrod said. “And this one guy saw us and came charging over and wanted to physically attack us.”

Both felt the incidents were improper.

“I think there do have to be some zones in which we can live, some sense of respect for the fact that she was there, not in an official capacity but with her family,” Axelrod said.

“We live in a country where acts like that tear at the character of our country,” Rove said.

“Every president over the past 60 years has presided over a situation where they’ve had to separate a parent from a child,” Rove said, referring to the criminal justice system. “We need to control our borders, every country deserves that right.”

The Q&A session preceded the evening event held at the Greensboro Coliseum and was held in the West Gallery in Founders Hall.