“Off the Streets” brings color to Hege Library 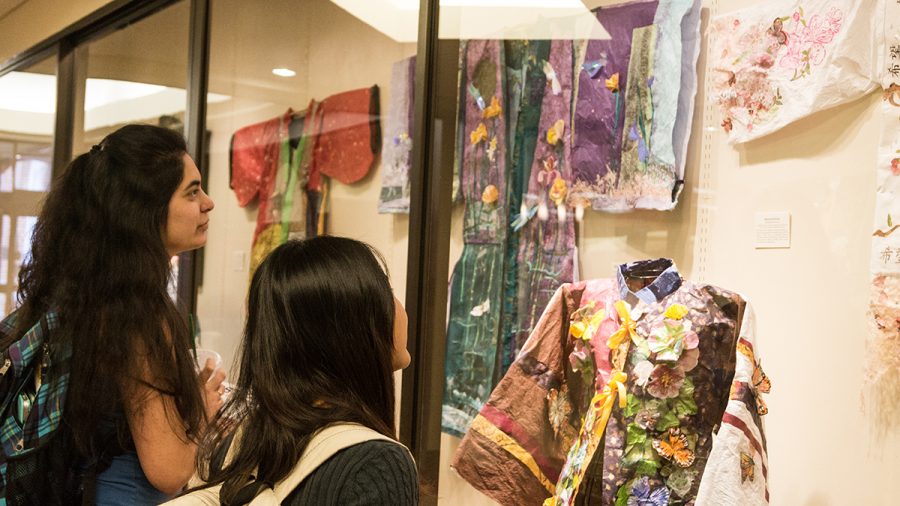 “Off the Streets,” created by Caroline Garrett Hardy, features 14 hand-made paper garments, each with their own color palette, theme and story. // Photo By: Fernando Jiménez/The Guilfordian

In a typical art exhibition, impressions are everything. The goal is to make an impact on the audience, leave them yearning for more and having learned or felt something new.

“Off the Streets,” created by Williamsburg, Virginia Artist, Caroline Garrett Hardy, strives to do just that, with its use of a wide spectrum of colors and Japanese street rubbings.

Presented by the Guilford College Art Gallery, “Off the Streets” will be on display in Hege Library through Oct. 12. The exhibit features 14 hand-made paper garments and two hanging fish embellished with various rubbings. Primarily working with collages and paper maché, Hardy created the pieces for “Off the Streets,” ranging from kimonos to dresses, by combining printmaking with street rubbings to represent Japan straight from the streets. Not only is her art sustainable, but each work is unique to the culture in which she worked.

Each paper garment has its own color palette, theme and story. One garment, named “Butterfly Kimono,” utilizes butterflies to symbolize a “thrill of wonder” whose lives are “momentary miracles” and is intended to emphasize the power of nature.

“The idea of the alligator kept coming to me,” Hardy said in an email interview. “I thought a young emperor might be flattered to have an alligator on his robe. Alligators are akin to dragons, and there is no more desirable symbol for someone as a symbol of a dragon.”

While Hardy has traveled to several different countries, “Off the Streets” is mainly inspired by Japanese culture. She gained an admiration for the Japanese aesthetic of erratic patterns and combinations during her trip to Japan in 2012.

From street grates to tombstones and baby-changing stations, Hardy has collected a variety of rubbings from all over the globe.

“I do not want to live without expanding my understanding of ideas, other ways of seeing things, and other cultures,” Hardy said.

The exhibit is a step in a new direction for the Art Gallery.

“A lot of the work that we have here in the permanent collection is not that colorful,” said Art Founding Director and Curator Terry Hammond. “I try to have different types of art in the gallery. This fits into printmaking, and I haven’t done an exhibit on printmaking in a while. This exhibit is just a really beautiful, bold, colorful thing.”

Hardy considers light to be one of her most important tools when making art, allowing her pieces to stand out. Guilford community members have begun to notice the new art on display, pointing out how much brighter the library feels with the new art.

“Usually when I’m walking through the library I’m just looking at my phone,” says Linda Martinez, a junior majoring in communication services. “The art is very colorful and brings light to the library.”

When choosing the opening exhibit for the new academic year, Hardy’s art stood out to Hammond in many ways.

“Off the Streets” reflects Guilford’s core values of diversity, community and stewardship, which Hammond kept in mind while searching for this year’s opening exhibit.

“I took diversity, budget and other scheduling factors into consideration,” Hammond said.

As summer comes to an end, Hardy’s art pieces are expected to continue to make an impression at Guilford leaving both a physical and emotional effect on the exhibit’s viewers.

“I really like that they have the art gallery here,” said Early College student Trinity Taylor. “I hope the library continues to add more vibrant pieces.”