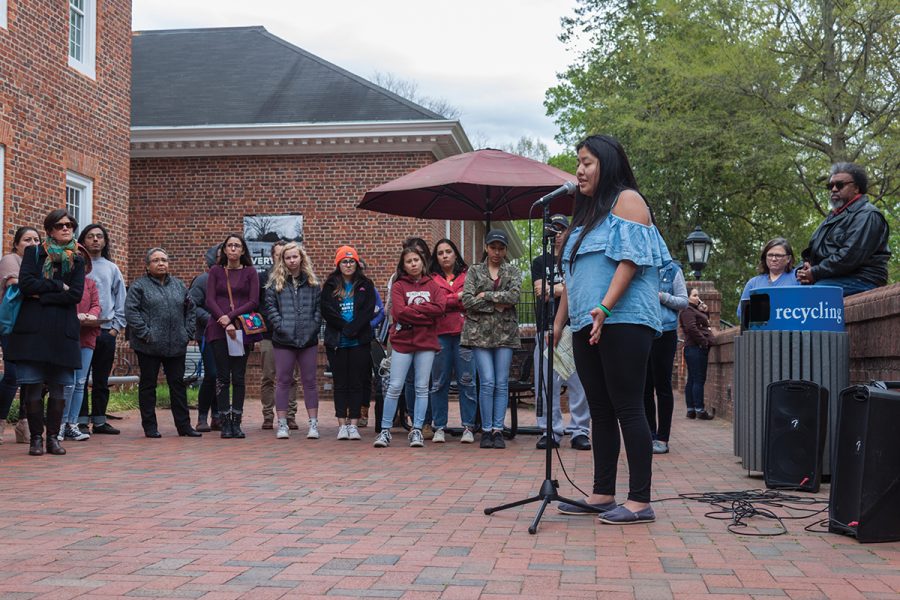 On Monday, April 16, local immigrant rights group American Friends Service Committee/Siembra North Carolina held an assembly and press conference to stand in solidarity with sophomore Maria Peralta Porras, whose stepfather was detained by Immigrations and Customs Enforcement this past week.

An estimated 38 people were detained by ICE in a statewide operation that lasted from Monday, April 6 to Sunday, April 15. Peralta Porras’ stepfather, Enrique Vilchis Jimenez, was detained on the morning of Monday, April 9 as he was taking out the trash in front of his house in Chapel Hill.

Peralta Porras shared her story with over 70 Guilford and Greensboro community members during the assembly that took place in front of Founders Hall.

“ICE ripped my stepfather from my family, and what they have done is wrong and unforgivable,” said Peralta Porras . “How can you cruelly take a father figure from his family while he is throwing out the trash?

“This whole week, my family has been looking left and right in our apartment complex, like we did something wrong. I do not want to have this fear anymore. I will not be silent.”

According to the Southern Poverty Law Center, the bond for immigrants detained in Georgia is much higher than the national average. Additionally, they are less likely to be released on bond than detainees nationwide.

Irving Zavaleta Jiménez, assistant director for the Multicultural Education Department, stood in solidarity with Maria and her family, and expressed his thoughts on how unfair ICE protocol can be.

“ICE can, and has, detained people who have been around, when they are searching for others” he said. “Any type of contact with the law enforcement can land an undocumented immigrant in ICE detention, even with no criminal charges.”

AFSC/Siembra NC quickly mobilized and put together a support plan for Maria and her family as soon as they received the news of the incident. Laura Garduño García, a Siembra NC organizing fellow, visited the neighborhoods that were targeted to help individuals better understand how to protect their rights.

“When we realized that there were more affected families in Hillsborough, Carrboro and Chapel Hill, we talked with neighbors about implementing an ICE watch community program, complete with text messaging alerts and ICE interrupters,” García said. “Let this be clear, we will not stand by, and let ICE separate our families and destroy our community, without a fight. We will fight alongside you Maria, every step of the way.”

Before the assembly concluded, Peralta Porras posed two questions to the members of the community standing in solidarity with her.

“What will you do after weeks pass and my story goes away?” Peralta Porras said. “How will you help a community that is under attack?”

A fundraising page has been initiated to raise needed funds for her family. You can help Maria’s family to pay for legal fees and her stepfather’s bond by visiting her crowdfunding page at youcaring.com/supportMariaPeralta.