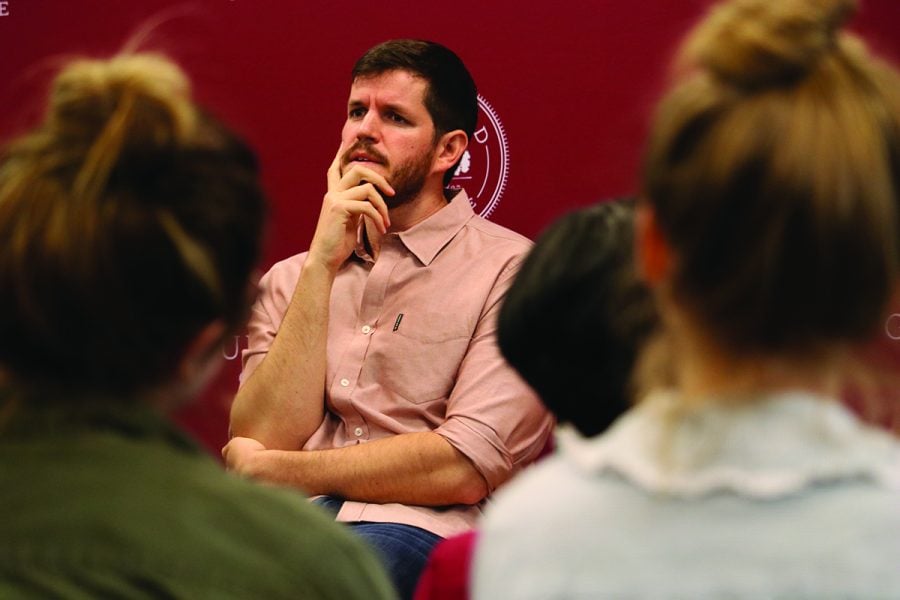 Brandon Stanton answers student questions during the Q&A session that happened at Guilford before the main event. // Photo by Abigail Bekele/ The Guilfordian

“And I always say, if I had been waiting for the idea of ‘Humans of New York,’ I never would have started ‘Humans of New York,’” said founder of blog, “Humans of New York” and one of Time Magazine’s “30 Under 30 People Changing The World,” Brandon Stanton. “You cannot wait for the perfect idea before pursuing what it is that you want. Pursuing the work that you think will nourish you.”

Stanton spoke about his work with HONY as a photographer, blogger and storyteller at the final event to the 2017-2018 Guilford Bryan Series on Tuesday, April 10, at the Greensboro Coliseum.

His blog shares the stories and photographs of thousands of strangers who Stanton, himself, has met and spoken to on the streets.

“When I met him, what struck me the most is that he has a deep sense of responsibility to the people, I guess to the individual human being whose stories he’s telling,” said President Jane Fernandes, introducing Stanton to the stage. “And to be honest, and to be a person of integrity as he tells the stories they want him to tell.”

Stanton opened the talk, sharing how he went from trading bonds in Chicago to photographing strangers in the crowded streets of New York City for HONY.

The New York Times bestselling author of books, “Humans of New York” and “Humans of New York: Stories” shed light on the gradual process of HONY in becoming what it is today, stressing the disadvantages of waiting for the perfect idea.

“Everybody is trying to plan and strategize, hoping to land upon an idea that is so perfect that there is not a chance of failure,” said Stanton. “Because that makes it comfortable. We think if we just plan it a little bit more, if we talk it through a little bit more, or we just wait a little bit longer, the idea will become so good that everybody will say it’s a great idea. And there will be no chance of it going wrong, and us publicly failing. That moment never comes.

“‘Humans of New York,’ the idea that I built my life around that has led to all of this amazing success and all of these wonderful experiences, was not a flash of inspiration that I had sitting in my room with a journal. ‘Humans of New York’ came out of commitment to doing the work I love, doing it every single day and in the process, making hundreds of small evolutions as I was there doing the work, and eventually growing it into something that was viable and successful.”

Stanton spoke about the importance of listening in storytelling.

“There is this appreciation for being hurt,” said Stanton. “There is this appreciation for being listened to. And I mean really, really, really listened to. Not what do you want for dinner, not where do you want to go for vacation, how’d you like that episode? What’s your biggest struggle right now, what do you feel most guilty about in life, how has your life disappointed you? And those are just the first questions.”

Sharing some of his most notable photographs and pieces done in New York, Iran, Uganda and Pakistan, a few among many others, Stanton spoke about the impact of storytelling and emphasized the power of a story.

“Especially in New York City, when so many people have problems, and they’re drug addicts, they’ve lost their families,” said Stanton. “A lot of times, the only thing that somebody has is their story. That’s the only thing that they’re carrying around with them. And to have somebody come up to them and say it means something, it’s important.

To close the last series event, Stanton reminded the audience of the importance of choosing what to do.

“There’s many people who are using following their dreams as an excuse to not work hard. When in reality following your dreams correctly, was nothing but hard work. Nothing but hard work. So it’s not the ideal that you can get to a place where you can sit back and you don’t have to work. The ideal is to get to somewhere where you can structure your life around choosing the work that you do everyday.”

“I loved the comment that he has on, if you wait until you get the perfect idea, then it may not happen,” said Bowman. “I loved that, I really did. I’m an artist, but I feel like I don’t claim it very often.”