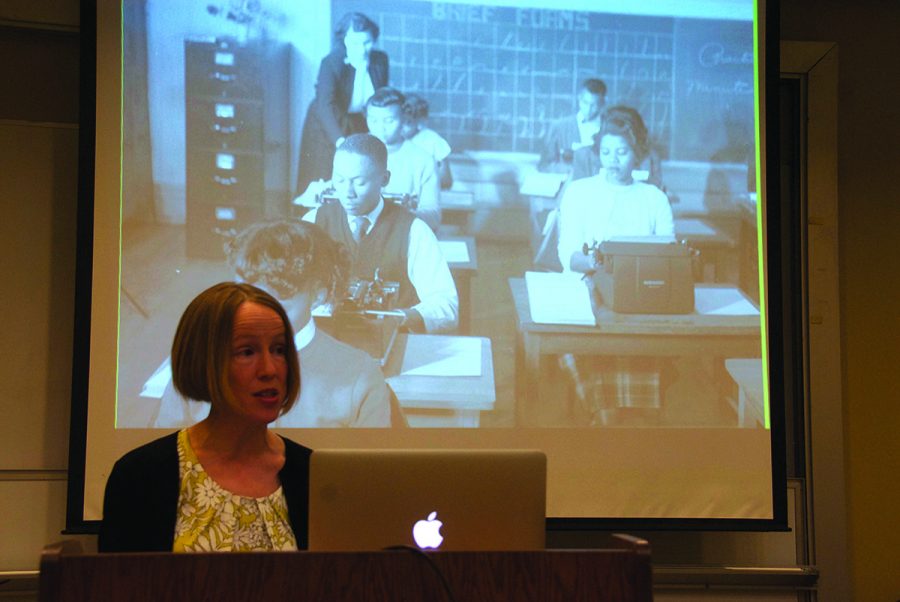 Sarah Thuesen, assistant professor of history, discusses the boycotts and student protests of the 1940s desegregation movement during the Newlin lecture.//Photo by Ezra Weiss/The Guilfordian

According to Assistant Professor of History Sarah Thuesen, the boycotts and student protests of the 1940s desegregation movement still hold weight today, despite occurring nearly 80 years ago.

Thuesen explored the importance of historical boycotts in North Carolina and presented research from her 2013 book “Greater than Equal: African-American Struggles for Schools and Citizenship in North Carolina, 1919-1965,” which focuses on student-led walkouts in the early 20th century, as part of Guilford’s annual Algie I. Newlin lecture on Thursday, March 29.

Newlin was a Guilford alum who taught history at the College from 1924 to 1966 and was involved in enrolling Japanese-American students at Guilford around the time of World War II, as young Japanese-Americans could get out of internment camps if they went to college. Newlin was also influential in the formation of the history department at Guilford.

During her lecture, Thuesen showed several photos from her book, depicting the quality of African-American schoolhouses during the 20th century.

“As I write in the book, having once viewed my generation the first of presumably many to attend integrated schools, I began to wonder if we instead were an aggregate blimp on the radar of education history,” said Thuesen.

A large part of Thuesen’s lecture focused on a section from her book about a student-led walkout in Lumberton, North Carolina in October 1946, which protested the poor conditions of the town’s two public schools. The students who organized the protest were supported by a local NAACP chapter and one of the youth council advisors, Dennis Clarence Smith.

“In a statement to the press, Smith charged that the schools in question were, ‘not worthy for human beings, and that the quality of academic work had suffered,’” said Thuesen. “Indeed, the walkout and strike earned local, state and even national coverage.”

The walkout was covered by the Raleigh News & Observer, which, while critical of the walkout at first, later supported it. Thuesen read an editorial from the paper.

“‘Ordinarily, student strikers are not to be condoned,’” said Thuesen. “‘But in this case, what is hard to understand is why they started school in such buildings and why they were ever permitted to do so.’”

Attendees such as history major Kathleen Kilmartin were surprised about the content of the lecture.

“The Raleigh News & Observer taking the side of the protestors, that sort of surprised me,” said Kilmartin. “It seemed like a rather more liberal thing than I expected at the time. I suppose I thought we would have been worse at the time.”

Some students enjoyed the opportunity to learn about North Carolina’s education history.

“I really enjoyed learning a bit about this,” said senior and food systems and history major Elias Smolcic-Larson. “I’m not really familiar with the movement here in North Carolina in that time period.”

Thuesen hopes to dive deeper into this research in the future.

“Even though the book is only about five years old, the more I started thinking about all that’s happened in the world in the past five years, if I were to sit down and write it today, I probably would write some things differently,” said Thuesen. “I only interviewed a handful of people and I wish I could have done more.

“Every time I go back to this Lumberton story, I think there’s more there.”