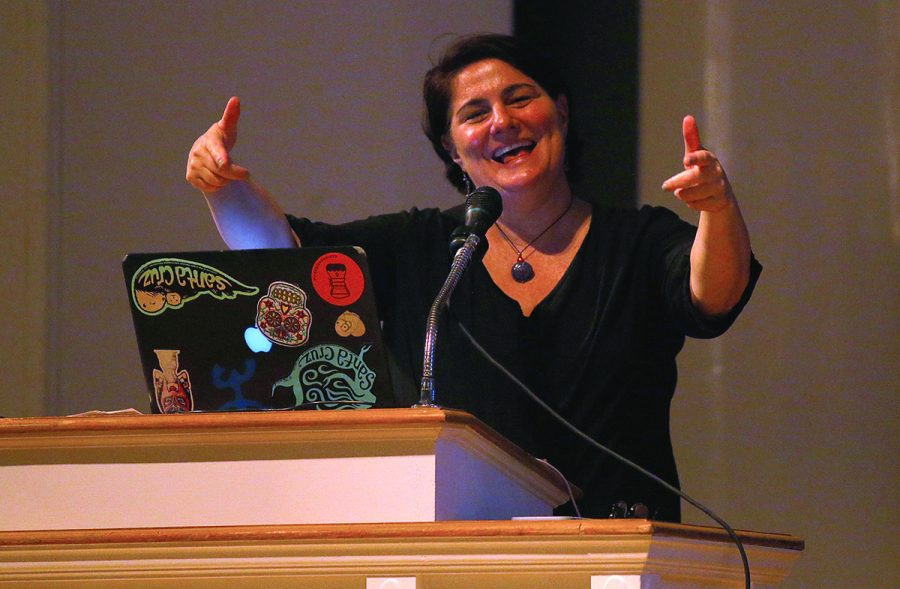 NPR correspondent Carrie Kahn opened up the floor for questions after her presentation Saturday, March 17 in Dana Auditorium during the “Journalist As Witness Multimedia Workshop and Conference.” Kahn played a few of her radio broadcasts as the staff correspondent for much of Latin America based in Mexico City, Mexico.//Photo Courtesy of Richard Sayer

“Pay attention to what’s going on in Mexico,” said NPR International Correspondent Carrie Kahn, who is based in Mexico City, Mexico. “I think it’s important, the desertion of the U.S. from Latin America. I think is going to be detrimental to Mexico.”

As part of “The Journalist as Witness: Politics, Protests and Displaced Peoples” journalism conference hosted by Visiting Assistant Professor for English Cheryl Hatch on March 16 and 17 at Guilford, Kahn presented a talk entitled, “Latin America in the Time of Trump,” about her coverage of events in Mexico, Central America and the Caribbean.

Her coverage spans topics as varied as the impact of U.S. immigration policy, the discovery of secret mass graves in Veracruz and the way the Mexican economy and U.S.-Mexico relations have been impacted by the election.

Kahn began her presentation by reflecting on former President Obama’s policies toward Latin America. According to Kahn, in contrast to President Trump, Obama pursued stronger ties and reconciliation over past disputes with Latin American countries. He restored diplomatic relations with Cuba, was the first president since Calvin Coolidge to visit Cuba and attended the 2015 Summit of the Americas in Panama.

“It was really stunning to watch,” said Kahn. “And it just broke a lot of the ice and led to a lot of re-engagement.”

“The head of the (Bank of Mexico) came on TV, and he told the Mexican public in a short statement (that) the fundamentals of the Mexican economy are sound,” said Kahn. “That was Mexico’s strategy to face what would continue to be a nonstop litany of insults, threats and the repudiations by Trump toward Mexico.”

To the outrage of local residents, Ford canceled construction of a Ford Plant in Villa de Reyes, a town in Mexico, which was slated to create 3,000 jobs.

“I would go to another town, where they were really scared about NAFTA, the economic boom being shut down,” said Kahn. “And it all followed the same thing, Mexicans are upset for being scapegoated by Trump and pissed at their president for not doing more.”

According to Kahn, Trump is further alienating countries such as Cuba, which has been closed to the U.S. since the Cold War in the 1950s.

“Trump goes quickly to reverse Obama’s re-establishment of diplomatic ties in Cuba. He did keep the embassy open in Havana, but he has not nominated an ambassador yet,” said Kahn. “And he did sign executive orders to roll back a lot of the economic and travel cooperation that Obama had begun.”

Domestically, Trump repealed the Temporary Protected Status program, which allowed citizens of certain countries to live and work in the United States legally. About 50,000 Haitians received TPS. According to Kahn, for many Haitian families, remittance money sent by relatives in the U.S. was a valuable source of income.

“It’s about $2 billion a year, which is the national operating budget of the Haitian government,” said Kahn. “It’s a huge amount of money that has returned in remittances.”

Attendees felt that the talk opened their eyes to the extent of the impact the U.S. has had on Latin America.

“To listen to Carrie, who was there when Obama visited Cuba for the first time, and to understand how historic that moment was with Cuba, we’re taking so many steps backwards now,” said Assistant Professor of Foreign Languages Karen Spira.

“I think it was also interesting to hear why she wanted to do this and what drives her,” said Allison DeBusk ’16. “NPR reporters always sound like real people who are very passionate about what they’re doing, and it’s incredible to actually hear one talk about that in person.”

Kahn was happy that the audience appeared to be engaged with her presentation.

“I am always thrilled to see how interested people are in Latin America,” said Kahn. “Especially in North Carolina, I did not think anybody really cared about Latin America.”