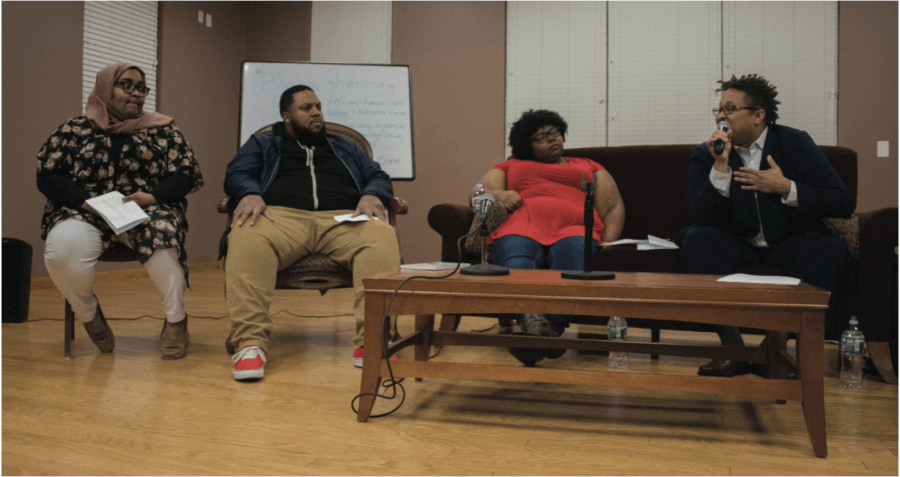 On Thursday, Feb. 8, Guilford community members gathered for a panel on black theology.

“Black theology is … a contestation to white theology (and) also a reclamation of the origins of true faith,” said Wrencher.

Wrencher also explained the historical context of the movement.

“Folks working within black theology are trying to recover the Africanisms, the blackness of the Christian tradition,” said Wrencher. “Athanasius was black, Egypt played a huge role, Carthage played a huge role in the formation of the church early on … there was an awakening among black clergy, black religious scholars.”

In addition to its historical significance, black theology is still important today.

“For me, personally, I fall back on the Quran,” said Khalifa. “It helps me to fight on, keep going.

“Overall, I think faith and spirituality helps me push and lets me never reach that point of numbness where I can’t do this anymore.”

“I’ve seen that the movement is church for a lot of people,” said Thomas. “It builds that need, that place where people create meaning, where people build family, where people have something to believe in that is bigger than themselves.

“It’s been a huge part of any social progress in the U.S.”

Like Khalifa, Slack falls back on his faith’s religious text.

“It was such a powerful moment for me, to read (Ezekiel 37) for the very first time in my life,” said Slack. “I have always gone back to it when I need it because it held such promise for me in a moment where I felt so fearful and uncertain.”

Panelists expressed that they found comfort not only in holy texts, but also in music.

Thomas listed songs that she finds comfort in.

“The things that get me through the most are probably Stevie Wonder’s ‘Heaven Help Us All’ and Al Jarreau’s ‘Have You Seen The Child,’” said Thomas.

Slack listens to music recommended to him by people in a black-only Facebook group.

“208 songs later, this really incredible playlist was born,” said Slack. “We put all of this music together in a Spotify playlist and called it, ‘The Sounds of Blackness.’”

The panel attracted the attention of many people, both students and community members alike.

“I first just really wanted to support the work that’s being done in the faith communities during Black History Month within black churches,” said Guilford Christian Ministry Campus Minister Judson Van Wyk. “I think it’s a voice people don’t hear about or know as much about, and also I just really wanted to learn.”

Other attendees, including first-year Allison Andrade, also learned from the event.

“One of my main thoughts is that black theology has a large emphasis on hope,” said Andrade. “I think it’s really amazing how many obstacles these people have overcome to be where they are right now. I think it’s extremely relevant, everything they’re saying … I see (it) in my community and it’s really true.”

Wrencher believes that the future of black theology lies within places of worship.

“Black liberation has a space, but it’s going to be in the churches, not necessarily in the academies,” said Wrencher.

“Faith is not about going someplace once a week and sitting down,” said Kolieboi. “But it’s an active thing.”