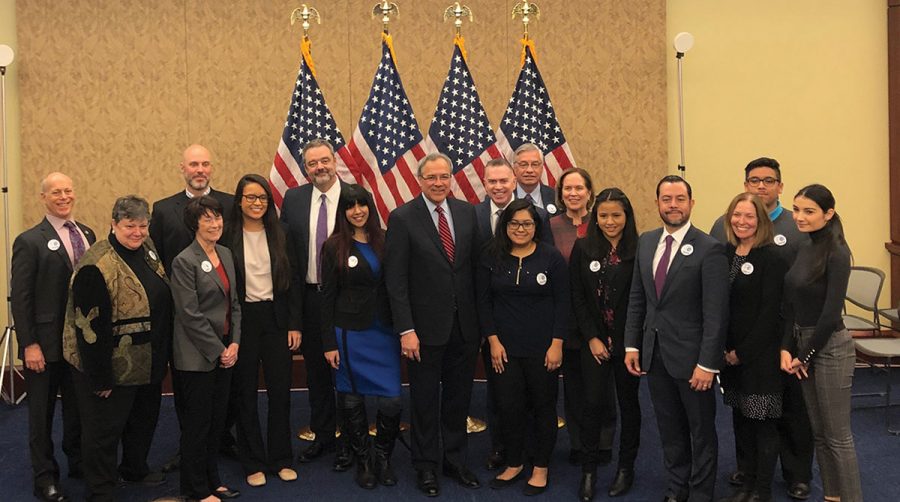 Jane Fernandes and Hector Rivera Suarez with members of the Presidents’ Alliance for Higher Education and Immigration and students in Washington, D.C. //Photo Courtesy of Jane Fernandes

On Dec. 12, 2017, Guilford College President Jane Fernandes joined over two dozen other college presidents from around the country to create the Presidents’ Alliance for Higher Education and Immigration.

The Alliance was created to advocate for policies which protect immigrant, undocumented and international faculty and students, and to raise awareness on the importance of inclusivity on campuses.

“Overall, the goal is to work with presidents around the country to try to influence policy related to immigration as it affects college students and our ability to recruit international students and international faculty,” said Fernandes. “Right now, we are focusing on (the Deferred Action for Childhood Arrivals) because that is an immediate problem that affects colleges all over the country.”

The DACA program is also the top priority of the Alliance.

“On behalf of the Presidents’ Alliance, we urge you to come together to pass bipartisan legislation to protect the young immigrants known as Dreamers from deportation as soon as possible before Jan. 19, 2018,” wrote several members of the Alliance to members of the United States House of Representatives and Senate on Jan. 11.

The Alliance wants Congress to pass legislation protecting recipients of the DACA program, which was created in 2012 by the Obama Administration and allows undocumented immigrants who entered the country as children to remain in the United States during a renewable two-year period of deferred action from deportation. The Trump Administration rescinded DACA last September. Membership for current DACA recipients is set to expire in March.

Over winter break, Fernandes and Student Community Senate President Hector Rivera Suarez met with members of Congress to promote a bill providing a path to citizenship for DACA recipients.

“I met with North Carolina representatives (and) senators … to encourage them to create a simple solution that would allow DACA recipients to have a path to naturalized citizenship,” said Fernandes. “And I am doing that in partnership with over 200 other college presidents throughout the country. We did create a powerful force in the capital two weeks ago.”

“Here at Guilford College, we support students, including DACA recipients,” said Zavaleta Jimenez. “These are students who have great retention rates, who are capable of doing the work and want to succeed.”

One way in which Guilford supports DACA recipients is by not requiring applicants to put their immigration status on their applications.

“Guilford College has a long history with the DACA community, building a supportive network,” said Fernandes. “For example, every year, the students sponsor the Soy un Líder conference and we bring hundreds of Latinx students and their parents here, and we teach them about access to higher education and how to plan for that.”

Fernandes believes that being a member of the Alliance will allow Guilford to become more involved in advocacy.

“Joining the Alliance gives Guilford College a structured way to advocate for international students, immigrants, DACA individuals … to ensure that they are allowed to come to this country to study and live,” said Fernandes. “In the case of people with DACA, (we want) to ensure they have a path to naturalized citizenship.