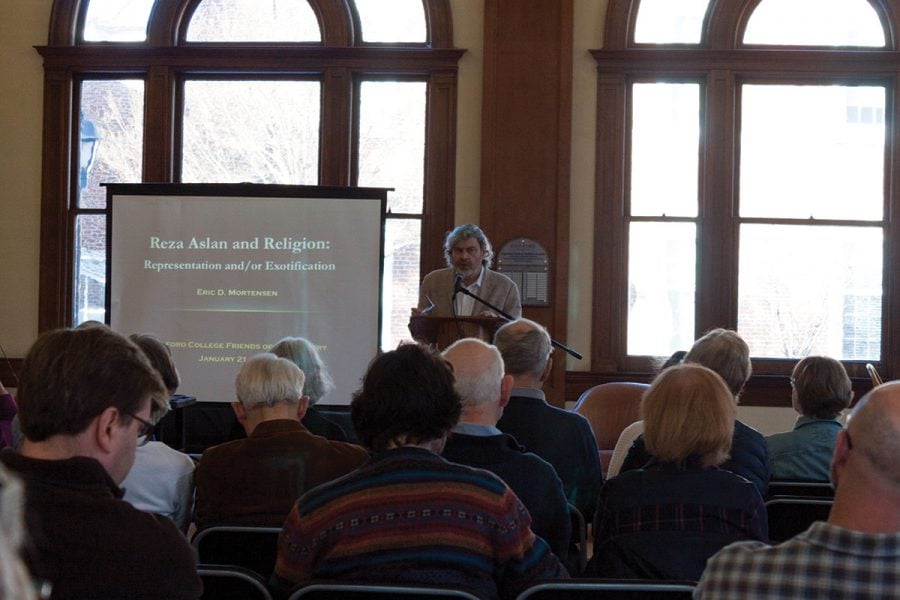 Associate Professor of Religious Studies Eric Mortensen presented Reza Aslan’s profile and works with over 50 individuals in the Carnegie Room of Hege Library on Sunday, Jan. 21, 2018.//Photo By Fernando Jiménez/ The Guilfordian

A room of students, faculty, community members and members of the Friends of the Library watched Associate Professor of Religious Studies Eric Mortensen as he presented on the works, goals and controversy of Reza Aslan in the Carnegie Room on Sunday, Jan. 21.

“My goal is to contextualize his visit and to hope to tell the people who are foolish enough to attend my talk … a little bit about who (Aslan) is as a thinker,” said Mortensen.

Sophomore Tibaria Alnouri attended the event in order to gain a better understanding of Aslan. “I thought it would be nice to get a nice low-down on who he is and what religious studies … thinks about him,” said Alnouri.

One of the points that Mortensen emphasized in his presentation was Aslan’s reputation in the field of religious studies.

“(Aslan’s books are) very popular, they’re written for a popular audience,” said Mortensen. “There’s a common blowback against that in academia because the experts look at people who popularize their fields as generalizing them or dumbing them down or not providing the kind of rigor they’re accustomed to in their rarified fields.”

Mortensen explained some of the reasons behind Aslan’s popularity. “What he’s great at is synthesizing and conveying in narrative form some really important stories with deep messages in them,” said Mortensen. “He’s a very, very good storyteller and a wonderful writer. His books are compelling.”

Although Mortensen enjoys the storytelling and content of Aslan’s four books, he finds Aslan’s CNN television show,“Believer,” to be problematic. On “Believer,” Aslan explored extremist sects of religions such as Hinduism and Judaism in an attempt to normalize the more mainstream practices of these religions.

For example, in an episode about Hinduism, Aslan features a cannibalistic fringe sect of Aghori Hinduism. In this episode, Aslan is smeared in cremated human ashes and eats a piece of a human brain.

“On his TV show, he picks very non-mainstream examples of religious practice and discusses them not as if they are necessarily representative of the whole tradition, but in relationship to the whole tradition,” said Mortensen. “(He) thereby runs the danger of exotifying religion and doing the essentializing and othering that he cautions against in his other work.”

“Believer” was canceled by CNN in June 2017 after a series of profane anti-Trump tweets were posted by Aslan.

“If I had five minutes with him and got to ask him a question, I think my first question for him would be whether or not he sees a major disconnect between the major themes in his public speaking and writing and this show,” said Mortensen. “In other words, is there something deeper about the show ‘Believer’ that he was hoping for and intending that a lot of us really didn’t find?”

Dan Malotky, dean of the School of Humanities and ​Lucy H. Robertson professor of religion and philosophy at Greensboro College, agrees with Mortensen about the dangers of exotifying religion.

“I like this notion that there’s a certain danger of when we’re looking at religious traditions of this exotification,” said Malotky. “In trying to be interesting we end up maybe even undermining our own goals.”

Despite Mortensen’s dislike of the content of Aslan’s show “Believer,” Mortensen believes that he is beneficial because of his storytelling ability, tendency to condemn bigotry and desire to build bridges between different faiths.

“He seems unafraid of speaking truth to power and has been a voice for calling out people’s bigotry against Muslims in America today, which I would like to celebrate,” said Mortensen. “He also can seem to speak very fluently between religious traditions. For example … he can speak to Christians about Islam and he can speak to Muslims about Christianity in a way that I think is bridge building and healthy.”

Mortensen encouraged his audience to think about the value of Aslan’s work.

“I think we should be able to approach Reza Aslan by saying, ‘What have we learned from him that we didn’t know before?’” said Mortensen. “I think he’s much more exciting than problematic … I think he’s a voice to pay attention to, he’s thoughtful and his intentions are excellent in terms of building dialogue and building understanding.

“I can’t see anything but good coming from the work he’s doing (to counter bigotry).”