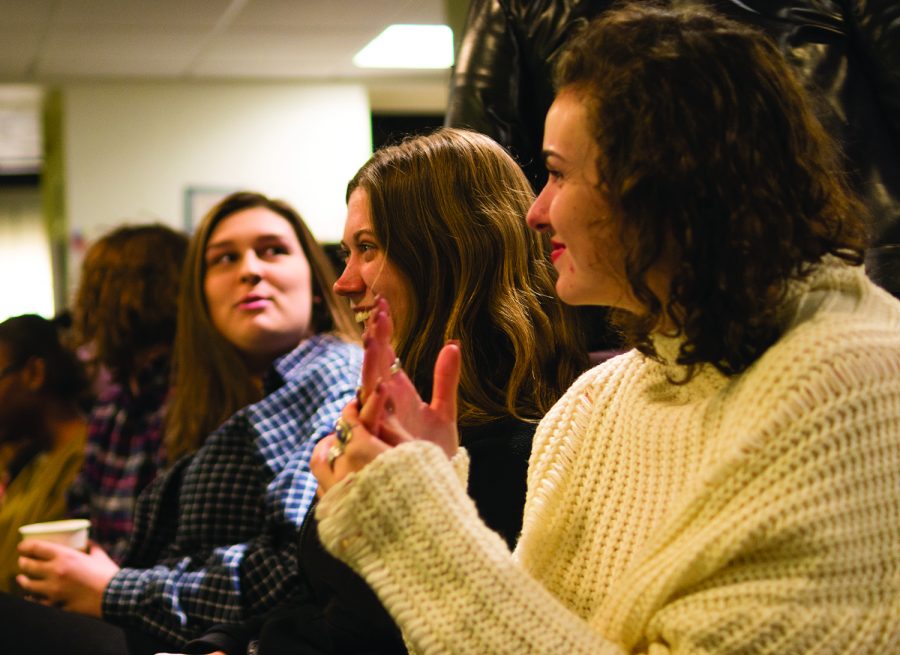 From right to left, Juniors Kylee Crook and Elyssa Shoup enjoy the first intermission of the annual Greenleaf poetry slam that took place on Friday, Nov. 17 at the Greenleaf Coffee Co-op. // Photo by Fernando Jiménez/The Guilfordian

A crowd of students gathered in chairs, on pillows and along the wall. A podium stood at the front of the room made of three stacked crates. 10 students prepared to recite and perform their poetry at the Greenleaf Coffee Co-op’s annual poetry slam on Friday, Nov. 17.

All of the poets performed two rounds of poems, with subjects ranging in theme from fear of judgement, drugs, ADHD and autism to gender identity. The audience encouraged the poets, cheering and snapping as they performed.

Sophomore Addie Ronis, a member of the Greenleaf and the organizer of the poetry slam, found the event to be different from the average campus activity.

“People aren’t floating in and out of the poetry slam, but they stay and get comfortable with each other for the whole night,” Ronis said in an email interview. “The poetry itself calls for folks to pay close attention and hear your peers in a way that is not average for most campus events.”

Many of the students expressed their anxiety over performing for such a large group.

Junior Rachel Chmelko, prior to beginning her poem, said to the crowd, “I’m terrified.”

The audience responded with encouraging snaps and hollers.

“Black hands built the building, once risen thrown into prison, handcuffing his wrists then saying you’re free to find your mission,” read Anderson.

After the first two rounds, there was a brief intermission to give the audience a chance to vote for their two favorite poets. There were also buckets passed around for donations to the Trans Kindred Collection fund and Black Lives Matter Gate City. Audience members were encouraged to donate and to write letters for Amnesty International Write for Rights cases.

The letter writing tables were from a collaboration earlier in the day between the Greenleaf and Amnesty International, but the event continued informally during the slam.

Tibaria Alnouri, a sophomore and the president of Amnesty International, left the information and resources for letter writing in the Greenleaf.

“There was no harm in just leaving the letters and case sheets out for people to mingle around,” Alnouri said in an email interview. “But when Addie actually called attention to the letters during one of the intermissions, I was so grateful.”

After the votes were counted and the donation buckets returned to the Greenleaf bar, Ronis walked up to the makeshift podium. The room fell quiet, and Ronis announced the three finalists: Angela Anderson, Rachel Chmelko and Jonah Woodstock.

The three poets performed their final poems, then the poets who had participated in the first two rounds circled up and voted for the winner which was Anderson.

“It felt amazing to win. I really just came to showcase my art. I never really thought I’d make it to the finals, but winning put me on a natural high, and I had to call my family and friends and share,” Anderson said in an email interview. “They were all like, ‘We knew that would happen.’ It’s great to have people around that believe in me and pushed me to perform.”

Anderson first saw the information about the slam on the Guilford Buzz, and was encouraged by her family to participate.

For Anderson and for others, the poetry slam provided an evening of creativity and art and a place for people to share their stories in a unique setting. As the evening concluded, students chatted with one another, bought coffee and tea from the Greenleaf and shared their favorite lines.

One of Alnouri’s favorites was from a trio of poets.

Between now and the next poetry slam, students can submit their work to the Greenleaf Review. Submissions will be accepted starting in spring 2018.