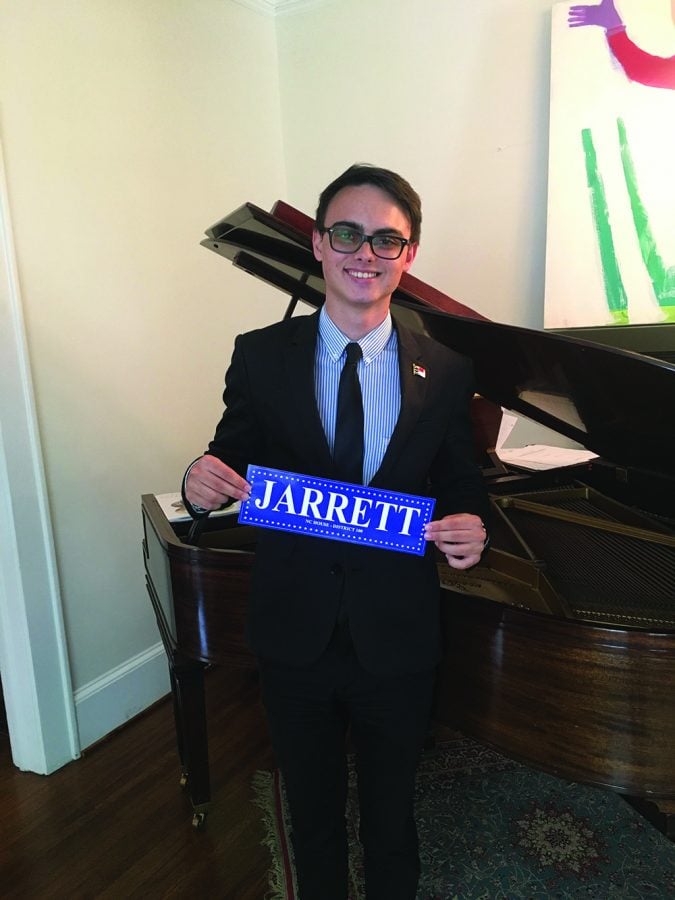 Sophomore Josh Jarrett poses with a bumper sticker from his campaign. // Photo courtesy of Josh Jarrett

If elected, 20-year-old Josh Jarrett would be the youngest state legislator in the history of North Carolina.

Jarrett is a Guilford College sophomore and political science major. Splitting time between both his school and campaigning, Jarrett is running for House Seat 102 which covers areas of downtown Charlotte.

Jarrett’s platform focuses mainly on what he refers to as “The Three E’s.” These include education, environment, and equality.

“There was something about being in a classroom that was already overcrowded with ripped up textbooks and a teacher being paid one of the worst salaries in the country,” Jarrett said. “Suddenly not wanting to be there any more than half the (students in the) class was really upsetting to me.

“In my mind, public education and education in its entirety are inalienable rights that needs to be guaranteed and given as the number one priority in any government.”

Jarrett feels that his age will aid him in solving these issues since he has more recent experience in education than other members of the legislature.

Jarrett’s campaign differs from others in terms of ideas as well as campaign finance. Jarrett funds almost his entire campaign with local private money. He has avoided donations from large corporations with the exception of environmental organizations.

“We are really about small grassroots funding … it has its difficulties,” said Jarrett. “But I feel that’s the way politics needs to be heading … If I continue the tradition from the past generation of just taking really large checks from any corporation that wants to (donate), how does that make our generation of politics any better than the previous? I think it’s really important, campaign finance needs to be (honest).”

Balancing the grind of both his studies and campaigning, while not easy, hasn’t been impossible for Jarrett. He feels managing both an education and a legislative career is doable.

“I’ll put it like this, most legislators are lawyers,” Jarrett said. “I think it’s almost (easier) to be a student with three classes than a lawyer with five clients. There is not a single legislator in the North Carolina legislative body that does not have another job.

“It’s considered by our state a part time job … everyone needs to be doing something else, and what I do as my something else is go to school.”

In fact, running for office was in Jarrett’s mind when he decided to attend Guilford. He chose the College specifically for its Greensboro location which will allow him to be close to his Charlotte constituents and the House which is in Raleigh.

Taylor Gastineau, a first-year at the University of North Carolina at Chapel Hill is the campaign’s field organizer. She is responsible for most of the campaign’s door to door operations and all of its canvassing efforts.

“I’ve been put into more of a leadership (role), which has been awesome,” said Gastineau. “It’s a smaller team, and I think we are trying to just go straight for our goal.”

Gastineau, a political science and business double major, has been working with the Jarrett campaign since July and in politics since the previous fall. Gastineau joined Jarrett’s campaign team because the two went to the same high school.

“He is insanely hardworking,” Gastineau said. “He’s very open to listening to others, and he’s very considerate. He wants to hear what people have to say which I think is very important if you want to get into politics.”

Jarrett’s campaign has a campaign rally about once a month and will be hosting an annual Gala event in January. The primary election for State House Seat 102 will be held on May 8, 2018, and the general election will be held on Nov. 6, 2018. Jarrett will face off against other candidates including incumbent democrat Becky Carney.