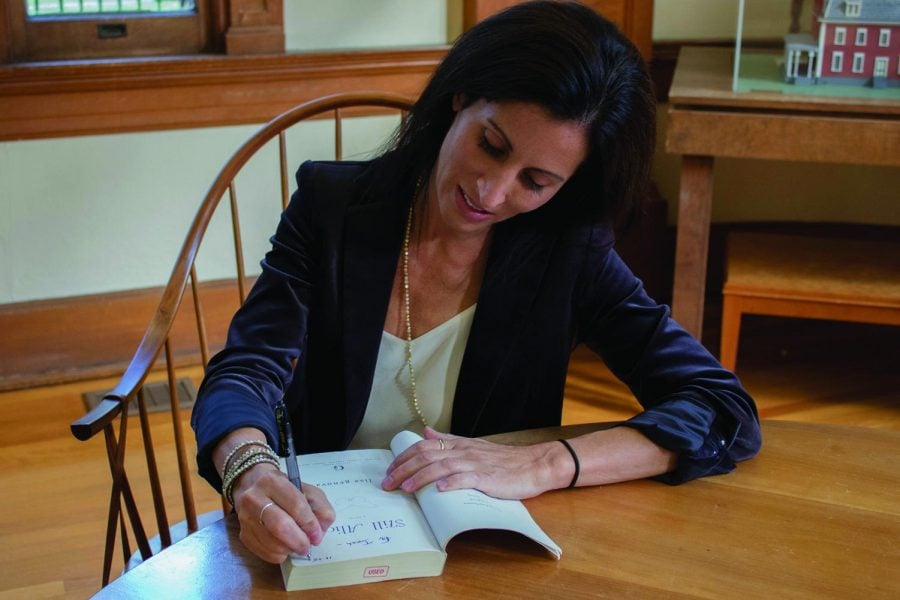 Lisa Genova, author of “Still Alice,” signs copies of her book at the Q&A session held in the Carnegie Room in Hege Library on Wednesday, Oct. 25, 2017.// Photo by Julia Martins de Sa/The Guilfordian

Entertaining a captivated audience, Lisa Genova spoke about the many challenges and accomplishments she faced in her career shift from a neuroscientist to an award-winning author. For the second Bryan Series speaker this semester, Genova spoke at the Greensboro Coliseum, covering topics from her grandmother’s struggle with Alzheimer’s disease to how that influenced her switch from being a scientist to a novelist.

Genova’s personable attitude and speaking ability allowed the Coliseum to play host to an audience who couldn’t stop listening. She pieced in stories about her personal life, bits of her book and sharp humor all to create an experience that one can’t miss.

Genova is best known for her first book “Still Alice,” which was published in 2007 and is about a woman working as a Columbia University professor with early on-set Alzheimer’s. The book was first self-published by Genova who sold copies out of her car. “Still Alice” won a Bronte Prize in 2008 and was adapted into an Academy Award-winning film in 2014 starring Julianne Moore. The book has also been translated into 37 different languages.

Genova’s interest in Alzheimer’s stemmed from her grandmother. Like most families, Alzheimer’s was not the first thing on their mind. She and her family started noticing their grandmother starting to lose her memory. She was forgetting names, not noticing the tea kettle “and she started cheating at bridge,” Genova said.

Genova also highlighted some statistics about Alzheimer’s including the fact that someone is diagnosed with the disease every 66 seconds, and over 5.5 million Americans have already been diagnosed. Genova also mentioned a key sentiment she learned from talking with those who have had to live with the disease.

“I ask them ‘Why me? Why did you trust me with this information?’ And they said, ‘We were hoping you would listen and give us a face.’”

Before speaking at the Coliseum, Genova spoke to only Guilford in a Q&A session. Personable as always, Genova also took this time to talk about her writing and how she creates pieces.

“I dropped my daughter off at pre-school, and then I drove to a Starbucks and started writing,” Genova said. “In the beginning, when I was writing it was really just stupid confidence.”

“I would periodically think, ‘who am I to do this?’ And I would go to libraries and look at all those books and think ‘if they can do it, why can’t I?’”

Suzanne Ingram, director of the Bryan Series, highlighted Genova’s ability to change careers and still be successful as a reason for her being included in the series.

Ingram also mentioned the success of Genova’s book as a reason for her being interesting to students.

Genova’s literature is highly influenced by her work as a neuroscientist, and her work on the mental health platform was another reason she was selected.

“We had not done a program focused on mental health, so we looked at speakers who could be considered experts in that area,” said Ty Buckner, associate vice president of alumni constituent relations within the advancement division.

Buckner also served as the event’s MC and Q&A moderator.

“The unique thing about it, of course, is that she is writing fiction to educate people about brain disorders,” said Buckner.

Genova now has three children. She has degrees from both Bates College and Harvard University. She has published four books, all covering a wide range of neurological diseases. Her new book is about ALS, or better known as Lou Gehrig’s disease. The novel features the main character Richard, who is a concert pianist. While Genova usually tries to avoid using people’s names from her personal life as characters, she felt drawn to the name Richard in memory of Richard Glatzer, one of the two directors of “Still Alice,” who passed away from ALS in 2015.

“We as humans hate to be uncomfortable,” Genova said. “Despite how scary (Alzheimer’s) is, we need to explore it if we ever want a cure. We can’t cure something that doesn’t exist.”