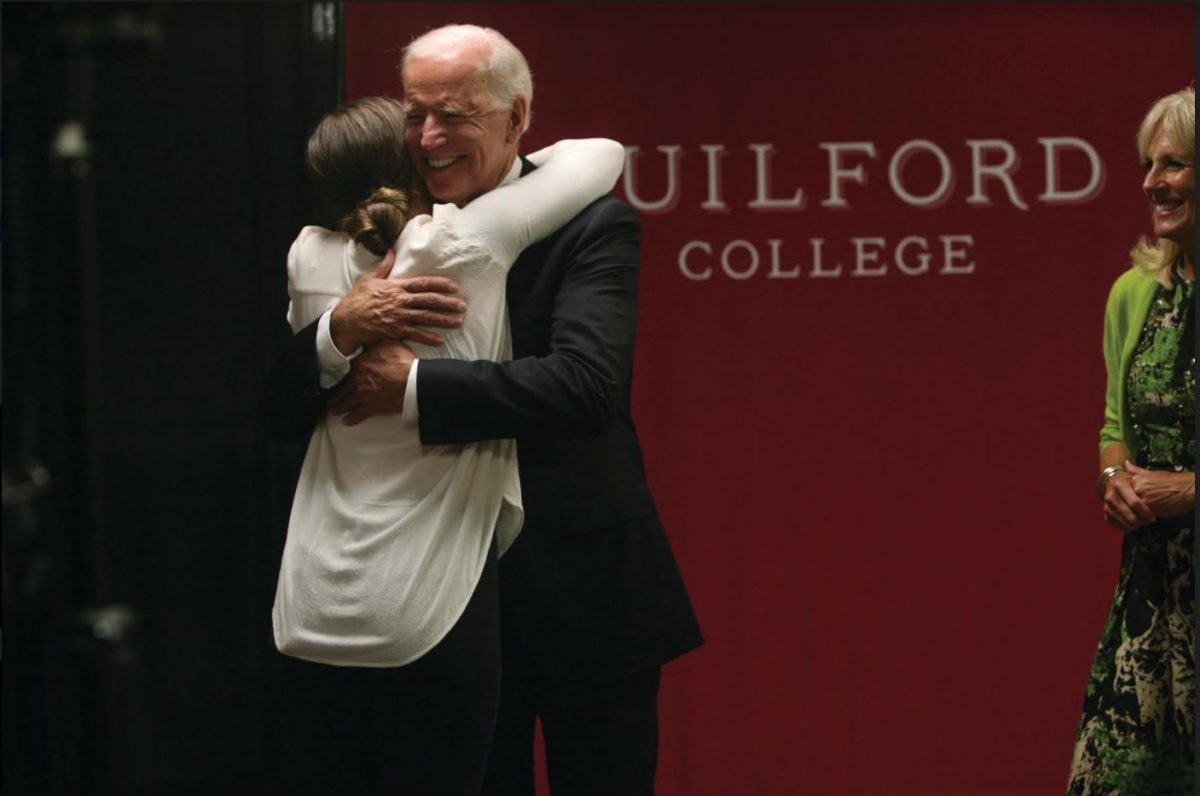 Courtney Gardner ‘18 hugs Vice President Joe Biden during the small student session that happened before the main event. Students of Guilford College’s Political Science department got a chance to meet Jill and Joe Biden before they took the Coliseum stage.// Photos by Abigail Bekele/The Guilfordian

“The greatest sin anyone can commit is the abuse of power, and the greatest abuse of power is segregation,” said Joe Biden, former Vice President of the United States, at the Greensboro Coliseum last Sunday.

On Sept. 17 at 7:30 p.m., Joe Biden and his wife Jill Biden, a career educator and notable public servant, spoke for the Guilford College Bryan Series. Students, faculty and members of the Greensboro community gathered to hear their answers to questions posed by Associate Vice President for the Bryan Series and Advancement Communications Ty Buckner.

Jill started the conversation by discussing her greatest inspiration for public service.

“Joe was my inspiration,” she said. “Marrying him gave me a platform to have a passion for public service.”

The Bidens met after Joe lost his first wife, Neilia Biden, who died in a traffic accident with their daughter, Naomi in 1972. But it was not until a few years later that Jill and Joe actually met. According to them, it took Joe five times to get Jill to say yes to marrying him.

Although the two of them encapsulated the audience’s attention with amusing anecdotes, they also managed to discuss relevant issues impacting the world today. These included their initiatives to fighting cancer, supporting veterans, improving the country’s education system and foreign policies.

“The system is broken because we don’t talk to each other anymore,” said Joe. “All politics are personal.”

When Biden initially launched his political career, both Democrats and Republicans would unite to work for their people. Today, according to him, politicians have become individualists.

Joe also reminded the audience that politics are relative.

“You can question a person’s judgment, but never a person’s motive,” he said.

Throughout the event, there were certain technical difficulties that affected the sound system for a few minutes. But the audience’s attention still didn’t falter.

“I attended the event because I am very interested in politics,” said senior Courtney Gardner. “Throughout their eight-year presidential (term), the Obama administration helped my family and I, as members of the middle class, in ways I never thought would be possible. I also especially admire Jill for all of her achievements and her work as a college professor. I wanted to thank Joe and Jill both and give them hugs.”

Gardner was one of the lucky students who had a chance to meet Jill and Joe personally in a small student session that happened prior to the main event. The Bidens spoke to every single student and took a group picture at the end of the session.

“Joe and Jill were both so incredibly humble and kind,” said Gardner. “As I have been more exposed to Joe as Vice President and also … as a pop culture icon, he was exactly how I pictured him. He was hilarious and really broke the ice as many students, along with myself, were pretty nervous before meeting him. (The Bidens) both embraced all of us and immediately made us feel comfortable.

“I wish that I had said more and cried less.”

Anna Kelly, a senior, also attended the small meeting through her work as an intern for the Guilford College Bryan Series. She and the staff had to work through the technical issues and the Biden’s specific requests.

“This event was very different than our typical routine,” Kelly said. “There were a lot of additional considerations with security, timing and meet and greet invitations. Overall, I think everything went very well.

“The Biden’s requested a different type of microphone than we usually used, and we did have some problems with the sound system at the beginning of the event. But I think we recovered from that, and the program continued to run smoothly.”

Although Jill gained public notoriety through her marriage to the Vice President of the U.S., she didn’t want her identity to be defined as being the second lady. She wanted her career as an educator to continue to be a central part of her life.

One of Jill’s primary focuses is to uplift women in the Science, Technology, Education and Math fields. She wishes to see more young girls empowered to prioritize pursuing a fruitful education.

“Women hold up half of the sky,” he said. “No nation can compete or succeed without gauging half the population as women.”

Joe’s final remarks impacted the audience, including alumni who were also present for the event.

“I found Biden’s final comment the most inspiring,” said Allison DeBusk ’16. “He said that politicians should always be willing to lose their position if it means voting for what they believe in. I think that comment is extremely well-timed and relevant as both Republicans and Democrats are (more) concerned about retaining donors instead of providing for the people.”