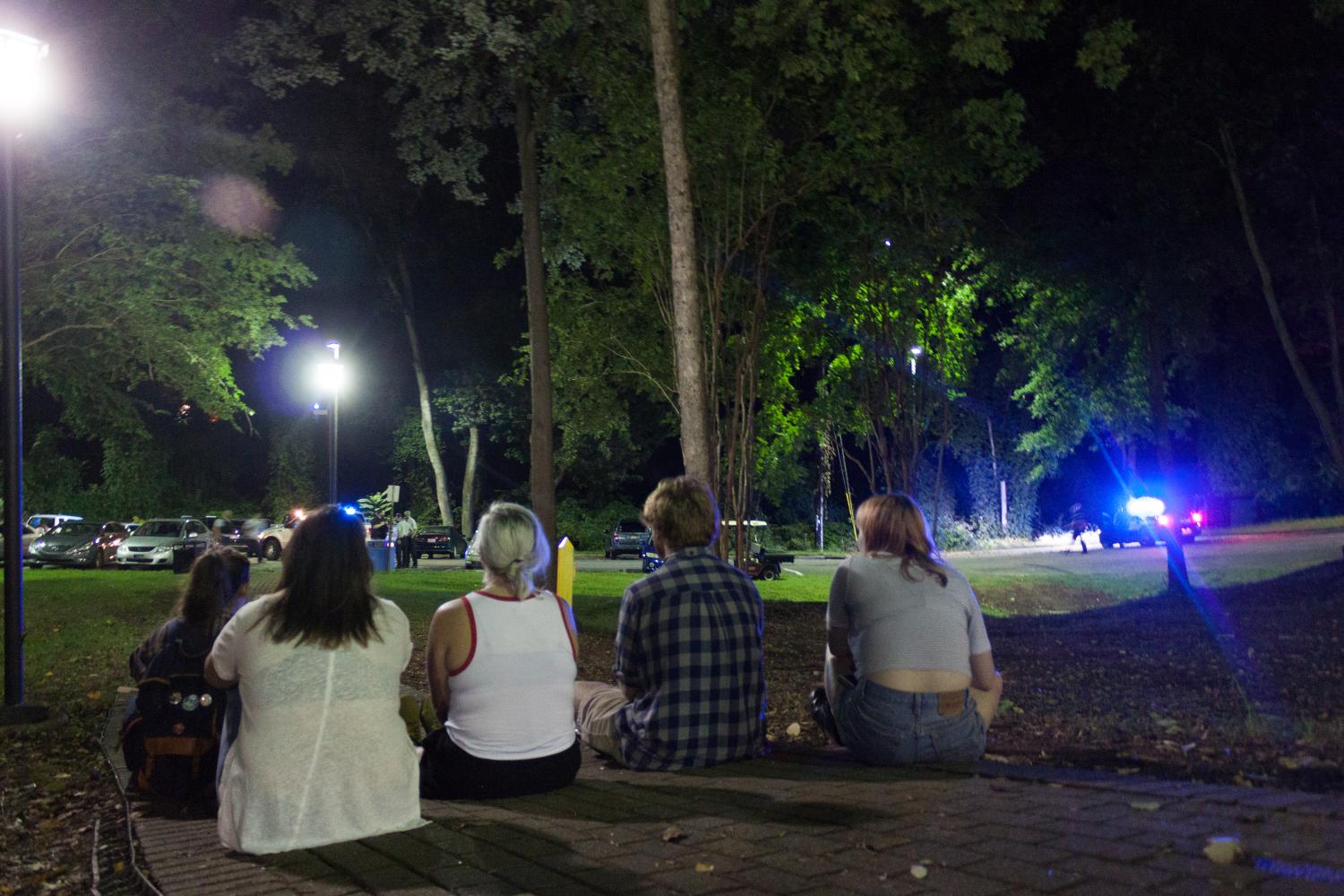 Five students sit on the pathway connecting the North Apartments to Elizabeth Fry Road as police conducted an operation at approximately 8:30 p.m. on Wednesday, Sept. 13, 2017.//Photo by Fernando Jimenez/The Guilfordian

A Guilford College administrator confirmed that Public Safety learned of a Greensboro Police Department operation once it was in progress Wednesday evening, Sept. 13, 2017.

“As stated in the emergency alerts last night, the Greensboro Police Department carried out an operation on our campus, which we became aware of while it was in process,” wrote Roger Degerman, vice president for marketing, in an email midday, Thursday, Sept. 14, 2017.  “Guilford College Public Safety and campus on-call staff responded to the scene to ensure the safety of our campus.

“Obviously, the safety of our community is paramount. The timing of emergencies like last night can’t be anticipated, but we work to respond promptly to incidents as they arise and communicate through our emergency alert systems.”

The Greensboro Police Department has not released any additional details on the arrest as of midday Thursday.

Captain Teresa Biffle of the Greensboro Police Department said the operation is part of an active investigation.

“I have spoken with our Vice/Narcotic Division and the Department is not releasing any additional information regarding this case since the matter is still under active investigation.,” Biffle wrote in an email, midday Thursday, Sept. 14, 2017.

On Wednesday night, Greensboro police, including undercover officers and a K-9 unit, responded to a drug call near the North Apartments on Elizabeth Fry Road.

D.J. Breedlove, watch operation specialist for Greensboro police, said there was a drug call at 8:20 p.m. for Elizabeth Fry Road with a report of someone running. Breedlove confirmed there was one arrest; however, he said the name was not available yet.

William Anderson, director of Public Safety, issued an alert through the Guilford Emergency Alert Group at 9:03 p.m., stating that there were GPD officers both in plain clothes and uniform. He advised people to “shelter in place.”

Emma Rice, a senior, said she counted at least 10 police officers. Rice was sitting on the walkway between Elizabeth Fry Road and the North Apartments. Parker Styles, a senior, said he saw “like seven cop cars.” Styles was standing near the laundry room.

Elliott Jarrett, a senior, said police arrived from multiple directions in the area.

“P-Safe didn’t know. Somebody called them and told them,” Rice said.

Jarrett said the police spoke over the megaphone to a person in the woods.

“The cops yelled, ‘We will find you. We’re sending a dog in,’ and they sent one dog in,” Jarrett said.

A fire truck arrived around 9:15 p.m. and shined a light into the woods.

At 10:03 p.m., the Public Safety alert notified the campus that GPD had completed its operation and said there was no threat to the community.

Gate City Towing removed a dark blue Nissan V8 Titan truck at 10:15 p.m. An employee, Perry, who declined to give his last name, said the vehicle was driven straight to the City of Greensboro Police Evidence Division on South Swing Road.