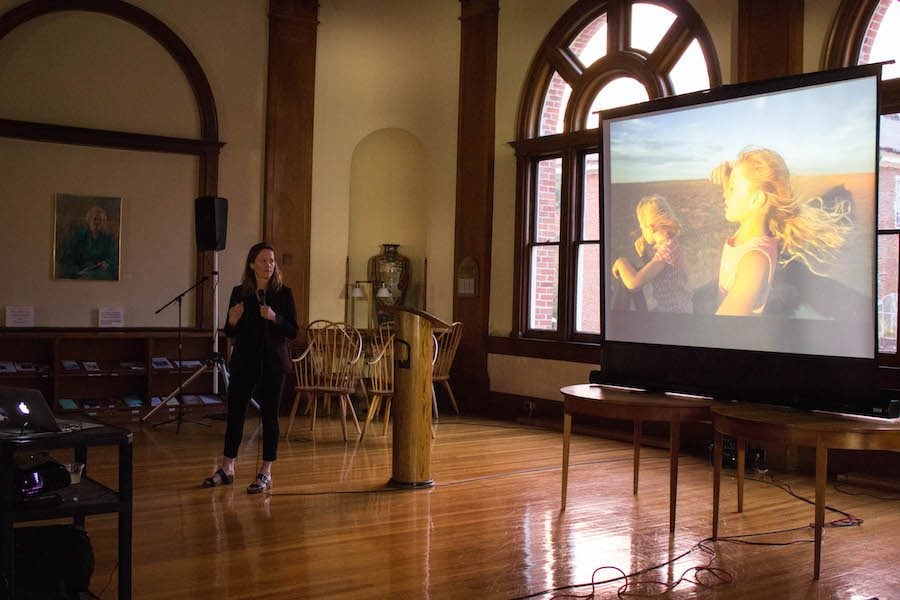 From India to Bosnia to Uganda, National Geographic photographer Amy Toensing has captured the stories of women who have lost their husbands.

“My passion is people,” said Toensing. “I like to put the human in everything I do. I’m very attracted to the emotional power of the visual language.”

Toensing has been a photojournalist since 1994 and became a contributing photographer for National Geographic in 1999. Toensing visited Guilford College on Monday, April 3, 2017 to present her project titled “A World of Widows,” which was sponsored in part by the Pulitzer Center on Crisis Reporting.

“In many parts of the world, a woman’s status is very attached to the man she’s associated with,” said Toensing. “It’s an interesting story to evaluate gender.”

Toensing first went to India in 2005 to begin the story. After their husbands die, many widows in India go to ashrams, which are Hindu monastic communities.

“Especially in Varanasi, … a lot of people go there to die,” said Toensing. “It’s like the most religious, beautiful place to die. You’ve entered widowhood, your husband is dead (and) this is where you’ll go to devote yourself to God and live out the rest of your life to die in the most holy place of the world.”

When widows go to an ashram, many of them have to use a thumbprint because they do not know how to sign their names. Daughters of widows are targeted by older men in the community and must leave school because their mothers are concerned for their safety. This lack of education impacts the daughters because they are unable to pay the dowry for a good husband.

“There’s a lack of education, so when a woman gets to that point, there’s no man, (and) she doesn’t have education or skills to take care of herself,” said Toensing. “So in some ways, daughters of widows are even more vulnerable than widows themselves.”

There are also social norms that widows in India are expected to follow, such as shaving their heads, wearing only white clothing and not attending celebrations because widows are believed to have bad luck. However, Toensing found that these social limitations are changing.

“It’s probably a slower movement than it should be,” said Toensing. “But it’s really amazing to see it happening and to see people changing their views.”

Toensing went on to present photos from another group of widows in Bosnia.

“Unfortunately, because of the massacre of Srebrenica, … when Serbs massacred over 8000 men and boys in a matter of seven days in the area around Srebrenica, … all of a sudden there was a really high number of widows and, very sadly, mothers who lost their sons,” said Toensing.

“I met some women who literally lost their husbands and three sons or four sons in a matter of one week.”

Some widows in Bosnia have yet to bury their husbands. During the massacre of Srebrenica, the Serbs buried the men in mass graves. However, when the international community began piecing together what had happened, the Serbs dug up the mass graves and reburied the bodies in different places.

“Each year, they have burials in Srebrenica, and the women go from massacre site to massacre site,” said Toensing. “These women are visiting a cultural center where (the Serbs) pushed hundreds of men in, and they shut the doors and … threw hand grenades inside and let them perish.

“They’re keeping these places alive and visiting them every year.”

When Toensing visited Bosnia in 2015, 136 bodies were buried, and the widows continue to bury more bodies each year.

Although the widows in Bosnia are not marginalized like the widows in India, their community has changed significantly. This is because women have to take up roles that men filled traditionally and rely on each other for support.

The final location Toensing presented on was Uganda. The widows in Uganda experience property grabbing, which is when their in-laws try to take away their inheritance due to the belief that inheritance should only be passed down to men. This still occurs in Uganda despite the laws in place which state that the widows can inherit land.

“The laws in a lot of these places might be protecting the women, but … the cultural traditions (are) what they’re really up against, and those are the things that need to change,” said Toensing. “That comes through education, that comes through awareness (and) that comes through people sticking up for themselves or other people advocating for people.”

Despite the challenges faced by women, change is happening in places like Uganda.

Toensing found an organization called the International Justice Mission that uses the laws that Uganda has in place to combat property grabbing. Through their work, perpetrators were prosecuted and put behind bars, which had never been done before.

“Nobody ever had to pay the price for property grabbing,” said Toensing. “It was just accepted that if you’re husband died, you’re a widow. You’re going to lose your property.”

Toensing created portraits of widows who had decided to fight against property grabbing. She showed images of widows who had won their cases and those who were still in the process to show the changing times and the determination of the widows in Uganda.

“I thought she did a great job of research and … her photos on such a difficult subject matter,” said community member Jane Chandra. “Her photos are really stunning. The way she learned about (the widows) and talked to them was also very interesting.”

Other attendees were moved by the combination of Toensing’s photos with her presentation.

“I was amazed and inspired by her work,” said Janet Starmer, visiting instructor of foreign languages.  “The photos themselves were stunningly beautiful, but I think what was more important was that she was really telling a story. I think that each image really tried to capture a moment and an idea, but then, of course, Amy herself was able to share more of the ideas than you might get from the image itself.

“She was really back in the moment that she took the photograph and tried to capture for us not in India or one of the other countries that she visited the essence of the moment she was trying to capture.”