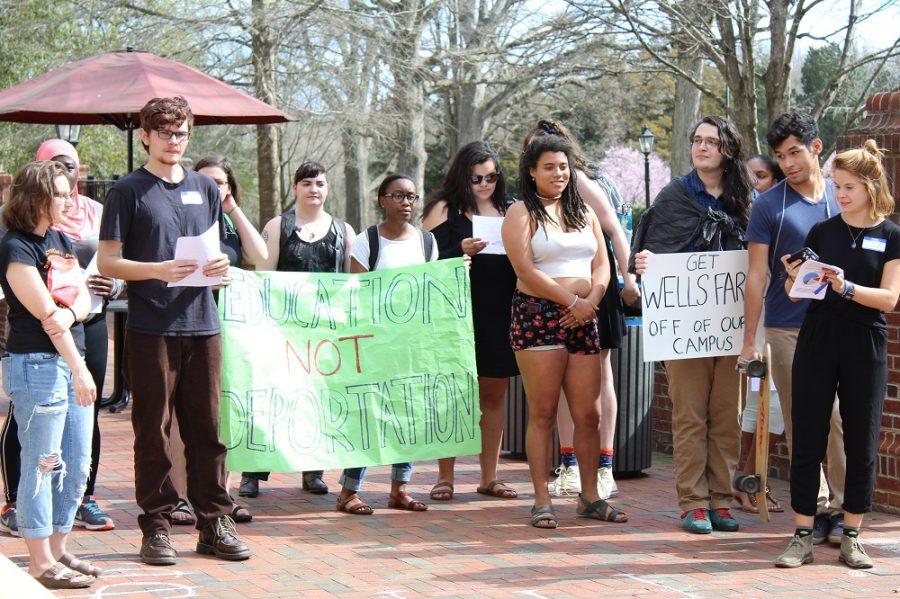 February 24, 2017, Integrity for Guilford hosted a speak-out protest in front of Founders Hall.

On Feb. 24, Integrity for Guilford hosted a speak-out protest in front of Founders Hall.

The event began at 1 p.m. with chants led by organizers. Chants included “From Palestine to Mexico, border walls have got to go” and “P-O-W-E-R, we got the power because we are the collective.”

Sophomore Terry Daniels then read the letter from Guilford students, staff, faculty and parents to President Jane Fernandes, Director of Public Safety William Anderson, Chair of the board of trustees Edward Winslow and the rest of the trustees. Over 250 Guilfordians have already signed the letter.

“As a Quaker institution that aligns itself with Quaker values, we have a duty to take a firm stance against Islamophobia, xenophobia, racism and the violent acts inspired by these ideologies,” Daniels read.

“As President Fernandes said in her blog post following the election of Donald Trump, ‘We must be vigilant and vocal in holding all of our leaders accountable at all levels.’”

After the organizers offered to let others speak, students and faculty stepped up and addressed the administration.

Many students spoke about their experiences being people of color on campus.

“That being said, nothing really happened. It took specific students reaching out to campus life officials, for lack of a better word, asking for something to happen. My job is to be a student. My job is not to tell you what to do.”

Foshay also addressed how she often feels called upon to talk about her experiences by white members of the Guilford community as an educational tool.

“They then gathered us all in a room and asked us to share our experiences, which would have been fine, except that my experience as a person of color is not there to comfort your guilt,” said Foshay. “My experience is not there for you to make you understand how to be a better RA. It’s just not.”

After several students of color spoke, organizers opened up the floor for white people to speak.

Sophomore Elijah Rogan-Kelly addressed how he was recruited as a perspective student, saying that he saw something special in the school.

“When I got here, it was here,” said Rogan-Kelly. “I saw it for me. I didn’t see it for other people. So I listened. And I got involved. And I stayed involved.”

After listening to a multitude of community members, Integrity led the speak-out to the Multicultural Education Department to debrief.

Integrity is open this year to any student. The group meets Sunday nights at 8:00 p.m. in the MED.