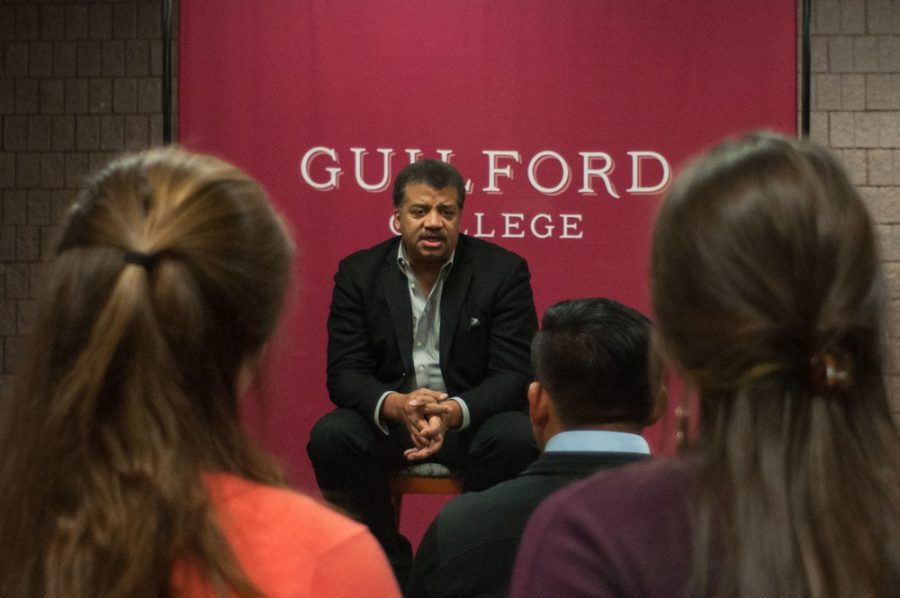 For a man who has spent his life studying the stars, Neil deGrasse Tyson’s Bryan Series event was incredibly down-to-earth.

“This is the first time I’ve ever given a talk in a place that has skyboxes,” Tyson joked at the beginning of his talk. “Send me a beer if you get one.”

Tyson, an astrophysicist and cosmologist, visited the Bryan Series on Jan. 31. Before launching into the talk at the Greensboro Coliseum, Tyson explained his topic.

“I supplied your organizers with a list of possible topics for them to choose from – 20-something topics that I can speak on,” said Tyson. “They picked this one, and I’m delighted to do so. It’s called Adventures in Science Literacy.”

He presented several slides of foreign currency, pointing out that countries who feature scientists on their currency, such as Poland and Germany, are often more ahead in terms of scientific advancement.

“That was, I think, a really nice way to introduce that these things are a part of other cultures and not necessarily something we value in the same way,” said Visiting Instructor of Foreign Languages Janet Starmer.

He also reminded the audience of the dangers of what he calls “bad science.”

“If you asked people what happened in New Orleans in 2005, most will say Hurricane Katrina,” said Tyson. “Hurricane Katrina, on landfall, dropped a magnitude. It went across New Orleans and came out the other side. People were just sweeping up some of the broken branches, then the levees broke.

“New Orleans flooded not because of Katrina, but because of faulty engineering. Our American hubris prevents us from confessing that to ourselves. I don’t even know what country this is.”

Tyson’s talk was added as a special event, separate from the other five speakers coming this year.

“When we put together the 2016-17 season, which initially included five events in that subscription package, Neil deGrasse Tyson was not in it,” said Associate Vice President for the Bryan Series and Advancement Communications Ty Buckner. “We were unable to get his commitment in time to put him in that subscription.

“Later, we were able to. We decided it would work really well as a stand-alone program. In fact, it did.”

“After spending one hour with Neil deGrasse Tyson, I think you are about to have your minds opened and your hearts open,” said Fernandes. “He’s an amazing man. He’s funny and he’s astute.

Professors across disciplines are excited to incorporate parts of Tyson’s talk into their classes.

“He talked about how people used to think of vision as active rather than passive,” said Visiting Instructor of English Caroline McAlister. “That’s definitely true in the early modern period, in Shakespeare’s plays. People’s eye beams do things. There was this idea that the plague was passed through people looking at each other.”

So far, the Guilford community has been impressed with the speakers from this year’s Bryan Series.

“I enjoy speakers that bring diverse thoughts and interesting ideas,” said senior Lucas McCrory, who attended talks given by author Michael Pollan and human rights lawyer Amal Clooney. “(The Bryan Series) is definitely unique to Guilford. They’re bringing in world-renowned people, drawing them from all over the country. It’s an amazing opportunity.”

For Tyson, this is an opportunity to share his life’s work.

“Science doesn’t just rise up like a tree, all by itself,” said Tyson. “It requires support, investment, vision. It requires a participatory embrace in what science is and how and why it works.”

The next Bryan Series speaker will be founder of the Equal Justice Initiative, Bryan Stevenson on Feb. 21, followed by actor and humanitarian Alan Alda on April 6.