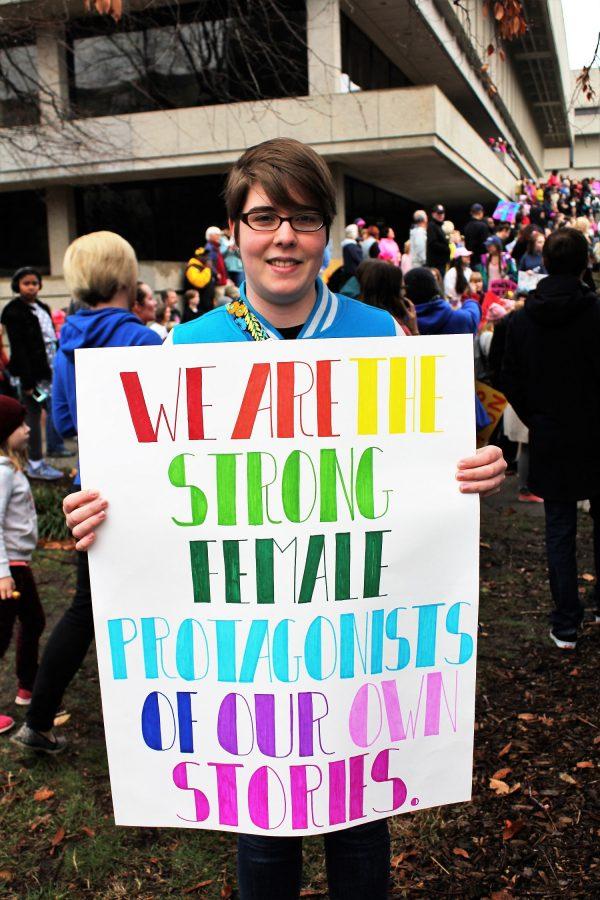 The crowd that gathered for the Triad NC Women’s March on Saturday at Government Plaza was so large that the speakers’ voices could not reach to the edge.

According to Fox8, about 3,000 people of all ages, races and genders gathered for the short march from the Plaza to the rally in LeBauer Park, including many members of the Guilford College community.

“I’m angry,” said Rachel Riskind, assistant professor of psychology, on why she came out to march.

Others came looking for some hope.

“I’m looking for some encouragement in a time of discouragement,” said Richie Zweigenhaft, Charles A. Dana professor of psychology. “Marching is minimal, but it’s one of the ways you can play defense (against bad policy) or affect change.”

Like many of the marches across the country, the Women’s March had a particular focus on Trump’s alleged sexual assaults, along with broader issues of reproductive health care and the gender wage gap.

“I think all of us are here to say women are important as we go into the next cycle of government,” said Libby Haile, the branch president of the American Association of University Women.

The march was designed to not only focus on women’s issues, however.

“We see this March (sic), not as a protest but as our being PROactive,” said the march’s Facebook page. “FOR rights for all people including all races, religions, sexual identities, the differently abled, the mentally ill; FOR superior public education; FOR equal pay for equal work; FOR paying a living wage; FOR health care for all; FOR Black Lives Matter; FOR women’s health including choice.”

Despite the proactive tone, however, many marchers saw a dim future for these issues.

“The last year and a half, there’s been a lot of issues that people felt were making progress,” said Jeremy Lyall, ’16. “And suddenly this guy shows up who wants to stop all of this.”

In LeBauer park, people surrounded the main stage on all sides to listen to a series of women — local pastors, cantors, rabbis, artists and more — speak, pray or sing. They repeated the march’s main themes — the necessity of protecting vulnerable members of society and to unite across divisions.

Many attendees wore the pink, knitted hats associated with the nationwide movement, others wore shirts supporting Planned Parenthood or Black Lives Matter. Parents carried children or pushed strollers, some adorned with posters of their own.

Karen Spira, assistant professor of foreign language, was among those who attended with her family.

“It is inspiring seeing so many Guilford folks here standing up for equality for all people,” she said.

And certainly some attendees took heart from the broad turn out.

“I’m really not worried (about the future),” said Linda Summers, who works with the Cancer Society support group. “If we come together with one accord, we can accomplish a lot.”