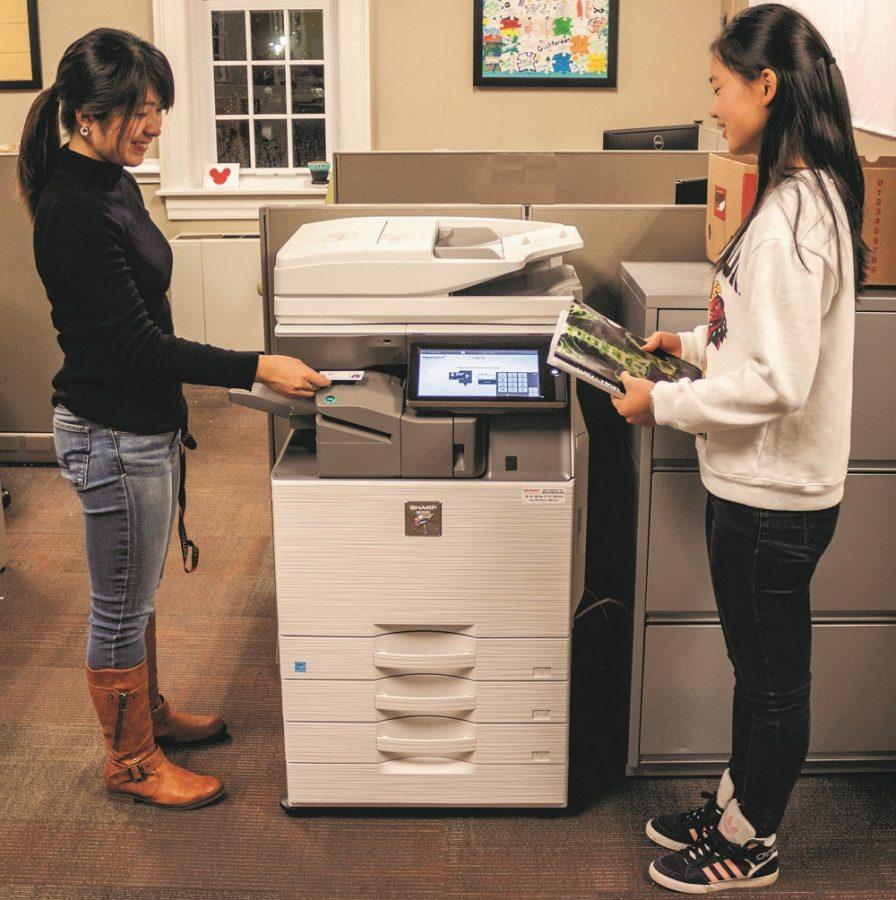 The era of Xerox printers is over at Guilford College.

The information technology & services department will be rolling out a set of Sharp printers before January Term to replace the Xerox printers that are currently used on campus. As of Nov. 17, six printers had been deployed for beta testing, and more have been added around campus over the course of the last two weeks.

According to Hulsey, the Sharp printers will be faster and of higher quality than the previous Xerox printers. They will also be more energy efficient and easier to use for faculty,  staff and students.

“The company itself has been a lot better to deal with,” said Hulsey. “If a machine has a part break, they’ll have a technician out that day.”

Xerox did not provide this level of customer service.

“We’d say, ‘Okay, we’ve done as much as we can and we’re going to have to call the Xerox tech to come out,’” said Donald Gillespie, IT&S student employee and CCE computing technology & information systems major. “And they are sick of coming out.”

Currently, there are several printers on campus that have been out of service for nearly a month.

“We did not have a good contract vehicle with Xerox,” said Director of IT&S Chuck Curry, Jr. “Obviously, Xerox is less inspired to work well now that they know that they’re going out the door.”

Gillespie believes that another problem with the Xerox printers is that they have multiple systems.

“There were (three) systems that had to work together,” said Gillespie. “And, apparently, Xerox, from what I hear, never worked exactly right from the beginning.”

The Sharp printers only use one system, and new proximity card readers on the printers do not require users to swipe their Quaker cards, only hold them up to the machine.

“(They are) a breath of fresh air,” Gillespie said. “That is the idea for any piece of technical equipment. You don’t want to have to think about it.”

The new printers will enable faculty and staff to more easily print confidential documents and will allow for remote printing from Google Cloud Print and the PaperCut MF web printing site. In addition, users will now pay 15 cents per page for colored printing rather than the 25 cents with the Xerox printers.

Students, faculty and staff who have used or been informed about the new printers seem to have positive opinions of the machines.

“(The printers) are really quick and fast,” said Stephanie Chang, the director of the multicultural education department. “They make me want to print more things.”

“I know that (the printers) are supposed to be easier to work with,” said sophomore Morgan Sleeth.

Despite the benefits of the new printers, Curry expects there to be some problems with the system.

“There will be a set of confusion because the thing is different,” Curry said.

Curry also believes that communication between the IT&S department and Guilford students could have been improved.

“Part of the challenge has been that we’ve been in set-up mode for a long time this fall,” said Curry. “All we could really say is ‘It’s coming.’”

The IT&S department can now name Dec. 15 as the day that the roll out will be completed.

“I just really want to stress (that) people (give) us feedback,” said Hulsey. “Let us know if (the printers) work, if they don’t work, if you love them (or) if you hate them. We need to know that.”