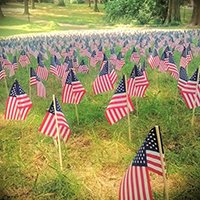 The American flag: a symbol of freedom, democracy and unity for some. But for many Quakers, the symbolism itself is something to be scrutinized. The warlike spirit that it often represents is contrary to their beliefs of peace and pacifism.

Guilford College has traditionally prohibited the public display of flags of any kind. However, recently, this policy has proven to cause more discord than harmony.

“I wanted to remind students what day it was,” said Houlihan. “13 years is a long time.”

They had full knowledge of the flag policy at the time.

About four hours later, the college removed the flag.

Houlihan proceeded to display the flag in two different locations off of Founders Hall before having it confiscated and being documented by Public Safety.

Houlihan accepted this consequence, hoping that his actions would instigate a dialogue within the Guilford community.

Last year on the same date, the Guilford College Republicans put up over 2,000 small flags on campus without repercussions.

“When I was president, and (prior to), Guilford College never banned the American flag,” said Kent Chabotar, former president of the College.

Despite these claims, there were restrictions in previous years on where a flag could be displayed. Public spaces such as windows were not allowed. Houlihan believes the flags put up last year may have flown under the radar because removing every one would have been more trouble that it was worth.

Interim Dean of Students Jennifer Agor had a different story. She said that the removal of Houlihan’s flag this year had nothing to do with patriotism.

“They were supposed to ask for permission to hang something, and they didn’t,” said Agor. “It’s as simple as that.”

The assumption that flag display is taboo is simply set by precedent.

Regardless of the reasoning behind Houlihan’s documentation, the event itself has led students to reconsider the tradition.

“We’re a school that prides ourselves on honoring different views,” said sophomore Davia Young, who believes flag displays should be allowed if in an appropriate and respectful manner.

Nonetheless, the College is an institution that prides itself on upholding Quaker values. For that reason, there are others who wish for the policy to remain intact.

“It is not because Quakers don’t care about those who have perished,” said Larry Boggess, head of the Quaker Friends School.

“It is not because Quakers don’t love their country. Friends de-emphasize symbols, preferring direct experience and participation in the experiences the symbols represent.”

Houlihan hopes to find a middle ground. He is now working on a petition to make an exemption to the flag policy on Sept. 11 as well as on Veteran’s Day.

“I’ll be damned if we can’t fly our flag a year from today.”