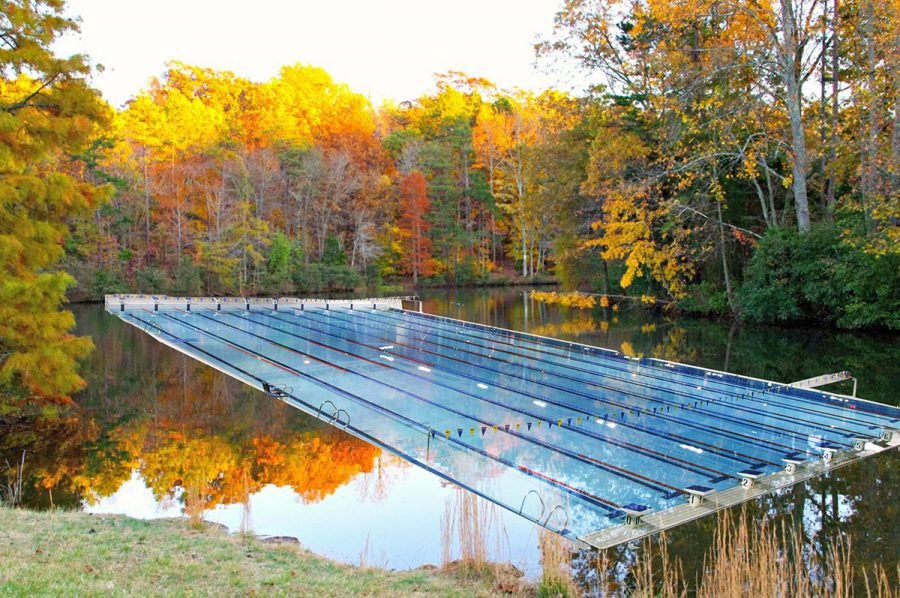 After nine years of students complaining that there is no pool on campus and the women’s swimming team practicing off campus, the administration has created an on-campus pool. The College announced that the lake is transforming into the Duck Duck Goose swimming pool for recreation and swim team competitions.

“We have heard the complaints and believe that this is the best way to solve the people’s complaints,” said Guilford College President Jane Fernandes at a press conference.

The pool is something that many people are excited about.

“I’m happy that Guilford will finally have a pool,” said Speedy Sidestroke ’13. “When I was just beginning, they had just gotten rid of the pool and I was sad that I had nowhere on campus to go swim.”

The announcement also added that Guilford will be adding a men’s swimming team and hiring new head coaches for the teams.

“The coaches have been really great with what resources they’ve had, but having a swimming pool will help us compete even more with the top Division IV team,” said senior Marty Flounder. “I’ve had many swims in the lake, but it will be great to know how far I have swam. Now I stop when I feel some bugs eating my leg.”

The pool will be 50 meters long and will have grandstands that will be floating next to it. People have mentioned that this facility could be used to host the swimming events in future Olympics as Greensboro is preparing a bid for the 2088 Summer Olympics. While Fernandes did not confirm the rumors, many prominent members of the Greensboro committee bidding for the Olympics was at the unveiling of the pool.

“This facility is for the students, staff and faculty of Guilford College,” said Fernandes. “It will also be used for hosting home swim meets.”

The press conference was not only attended by many excited people, but there were some protestors. The protestors included students from Guilford’s environmental studies major who said that swimming in the lake was unhealthy as there are unknown bacteria in the lake.

Dr. Ignaz Phillipp Semmelweis, the scientist hired by the College to conduct studies of the lake assured that it was safe to swim in.

“It is very clean and safe to swim. I have spent many months studying the lake and have done extensive tests on the water,” said Semmelweis. “My studies and tests have been to stare at the water for eight hours a day, and that has shown me how clean the lake is. It is so much cleaner than anything I have ever seen before.”

Another group of protestors are the ducks that inhabit the lake. The Muscovy ducks feel threatened by the thought of people swimming in the lake.

“The people will ruin the environment for our families that live on the water,” said, Bob Muscovy, head of the Populace Of Our Lake protest group. “We have calmly been living on this lake for many years with only a few disturbances from people jumping in, but now it will be every day.”

The pool fills a need for the College that most other college have access to, an on-campus pool that can be used by the students. While most other pools take awhile to be built, this was built over the past 24 hours. They brought in the lane lines and placed them in the water before sliding the grandstands into the water.

A concern with the pool is that it is not attached and can float around on the water. Many people thought that the pool should be anchored right at the front, allowing people to watch from the grass hill.

“We will not anchor it to the ground as we want to let it flow naturally,” said Fernandes. “This pool is very eco-friendly and we wanted to disturb as little of the environment as possible by letting it float around.”

While there is no telling if the pool will be a success, there is certainly a buzz in the air after the announcement.

The first meet that will be held at the Duck Duck Goose Pool will be the Quack Open between local Greensboro colleges on April 1.