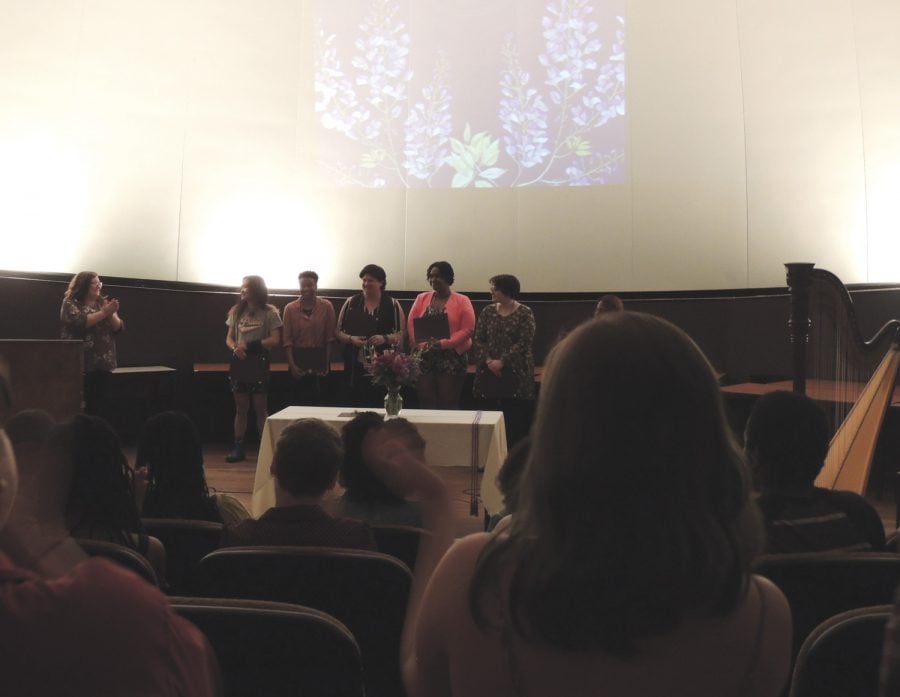 On April 10, Guilford held its inaugural Lavender Graduation to recognize graduating LGBTQIA and ally students.//Photo by: Abigail Abantohollans/ The Guilfordian

On April 10 from 6 to 8 p.m. in Bryan Jr. Auditorium, Guilford College held its inaugural Lavender Graduation. The Lavender Graduation celebrates graduating students from both undergraduate and graduate programs who are members of the LGBTQIA community.

“Lavender Graduation is an event held on numerous campuses to celebrate lesbian, gay, bisexual, trans, queer and all members of the LGBTQIA community and ally students to acknowledge their achievements and rich contributions to their college and campus culture,” said Meagan McNeely, Title IX and LGBTQIA education and response coordinator.

Lavender Graduation was originally created by Dr. Ronni Sanlo in 1995. Sanlo, a member of the LGBTQIA community, was not allowed to attend her children’s graduation due to her sexual orientation. After reflecting on this missed opportunity, Sanlo designed the first Lavender Graduation at the University of Michigan with three graduating students. Since 1995, the tradition of Lavender Graduation has spread to other colleges and universities across the nation.

“Lavender Graduation is an event in which LGBTQIA students not only share their hopes and dreams with one another, but they are officially recognized by the institution for their leadership and their successes and their achievements,” McNeely said. “When I look at Guilford College, and especially this graduating year, I see courageous and passionate students who are committed to creating a robust, critical and inclusive world.”

McNeely, along with Fernandes and Visiting Assistant Professor of Theatre Studies Chad Phillips, spoke at the Lavender Graduation. In addition, the ceremony featured a harp performance and speeches by students who were receiving their cords.

“I am proud of these graduates who are receiving their lavender cords and I am proud of the family, friends and teachers who have supported them along the way,” Fernandes said.

“When I first arrived at Guilford College 10 months ago, I couldn’t have imagined our students doing a sophisticated and innovative work of understanding liberation, oppression and injustice in such a nuanced and interconnected way,” said McNeely. “And now I stand here inspired by (them).”

“I was any Georgia boy, I just wasn’t every Georgia boy and that’s where some people had a problem,” Phillips said. “There were pressures put on me by my parents and an individual around me. Pressures of society, gender and conformity. My creativity and interests were not celebrated.”

Following this reflection, Phillips also shared his experience in college and reflected on individuals who celebrated him. Phillips used his story to show graduates that they are not alone in their college experiences.

“It was during college that the true flower of my personality blossomed,” Phillips said. “Finally, my creativity and my interests were developed. I wrote plays, but this time they won awards and became fully realized productions. I made films that found an audience. But it was a select few faculty members that took me aside and celebrated with me the aspects of my personality that were not celebrated as a kid.”

The Lavender Graduation allowed the Guilford community to set aside time to celebrate and recognize LGBTQIA students and the changes that they have worked to bring about in their campus and local communities.

“Those who will walk across that stage will embody each of our core values, and they inspire us to do the same,” Fernandes said. “They are making the entire Guilford College community proud.”