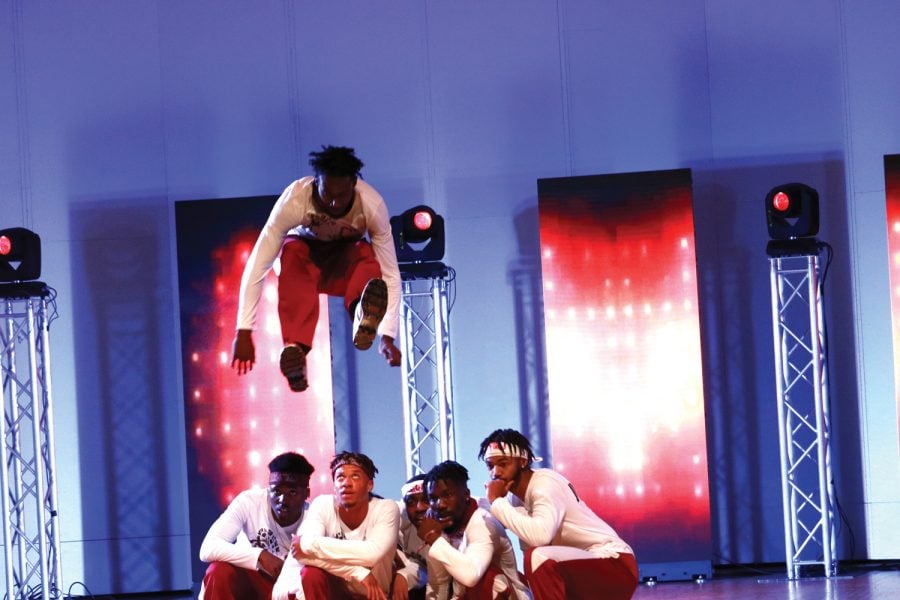 Guilford College hosts its second annual step show competition. In addition to Guilford, teams from NCCU also participated in the competition. Guilford College’s Community N’ Culture step team took first place and won $1,000 for the club. The show was held in Dana Auditorium on March 29 as a part of Serendipity. /Photo by Abigail Bekele/The Guilfordian

On Thursday, March 28 at 7:30 p.m., the Wild ‘n Out show was held in Dana Auditorium as part of this year’s Serendipity. Wild ‘n Out allowed students to see their peers perform in an improv and comedy show.

This year’s cast members included several students and acts that performed at Wild ‘n Out during previous years, such as sophomore Montrell Diggs, but also brought in new faces like senior Spencer File. Participants worked to make up jokes as they performed in order to provide entertainment for the members of the Guilford community.

Desi Banks and Darren Brand joined the students of Guilford College at Serendipity’s Wild ‘n Out event. One of the most anticipated events of Serendipity remained at the top due to the comedic stylings of Banks and Brand. There were several Guilford College students that joined the cast, having the guts to get up and put on a show mimicking that of Nick Cannon’s famous show.

Darren Brand began the show by bantering with the crowd, creating a playful atmosphere by calling out several people and putting on a show for the Guilford community. Brand is an experienced member of Wild ‘n Out.

Desi Banks was not previously involved in Wild ‘n Out and relied on his Instagram-comedy talents. Banks and Brand had a competitive nature in their shows, and attendees were split when deciding which act was better.

“I was expecting Darren Brand to be the one who completely took over the show, but Desi Banks was even funnier,” said senior James Rouse. “I think it has to do with the high expectation everyone had for Darren Brand and when Desi Banks was just as funny it put him over the top.”

During Wild ‘n Out, attendees and participants had the opportunity to take part in the event together through several minigames, such as Let Me Holla, Pick Up and Kill it and Turn Down for What.

“Pick Up and Kill It was by far the best game they played,” said senior Mahmoud Henderson. “Things got heated during this game because everyone was going at each other, using all the personal jokes they could think of.”

Many of the jokes employed during Pick Up and Kill It were more unique to Guilford students and their experiences thus far. Some students recalled funny times with friends or in classes that other students could relate to.

Although some changes were made to the Wild ‘n Out event that created differences from previous years, many attendees felt that the changes improved their experience at Wild ‘n Out.

“It has honestly been better and better every single time it comes around,” said senior Carson Long. “Bigger comedians, bigger musicians, it is impressive to see.”

In addition to Wild N Out, students were also able to perform at the G-Chella For the Culture Step Show. The step show, held on Friday, March 29 at 7:45 p.m. in Dana Auditorium, is another annual Serendipity event. This event allowed Guilford’s Culture in Community Step Team to showcase their talents as they competed against other collegiate teams.

Following each team’s performance, the teams were scored and Guilford’s CNC Step Team won over their competition.